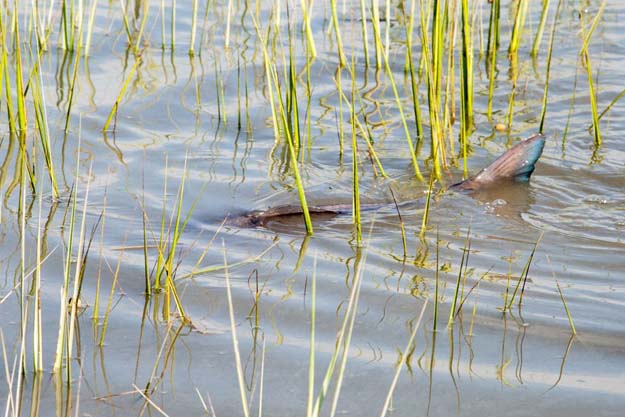 Late fall fiddler crab activity so concentrate reds feeding on them that an angler fishing the marshes of North Carolina, South Carolina, or Georgia without several “fiddler” patterns is like a golfer arriving at the first tee without golf clubs.

[dropcap]A[/dropcap] go-to source for coastal fishers of any angling religion is a couple of small books with far greater impactful information than any such big publisher tome on the nature of coastal game fish, the life of coastal prey fish and their different climatic, seasonal and biospheric influences.

One is titled Fisherman’s Coast, the other is Fly Fisherman’s Guide to Saltwater Prey (reference for matching coastal prey fish and invertebrates with the fly patterns that imitate them). Both were written by Dr. Aaron Adams (Ph.D.). The ocean is a mysterious frontier, and scientists who turn a lifetime of study into fishing advice are extremely rare. Adams’s new work belongs in the library of any angler who wants to start nearshore fishing with a solid understanding of what makes these environments so special. – Marshall Cutchin, Midcurrent.

Dr. Aaron Adams is one of the country’s foremost authorities on the conservation of inshore game fish and their habitats. But he is first and foremost a fly fisherman, whose ability to translate scientific research into real-world angling advice has resulted in an entire library of practical information condensed into one volume. – Steve Walburn, Editor, American Angler.

Fiddler crabs live in burrows along protected shorelines, often at or near the high tide line. Many species feed on detritus that collects along the shoreline. Shallow, open bottom shorelines are favorite locations to use fiddler crab patterns.

• “I tie this pattern in the style of Del Brown’s Merkin, but I like to use Puglisi fibers for this pattern rather than yarn – the fly lasts longer and can be re-trimmed when it gets too bushy.” – Aaron Adams

• Pull a small bunch of Puglisi fiber off the main bundle, and roll it between your thumb and fingers so that it looks like a stretch of yarn.

• Clip the rolled fiber bundle to appropriate lengths and tie in as with a standard Merkin pattern (fiber bundles laid perpendicular to the hook shank, tied in with a figure eight).

• The final step is to use scissors to trim the body flat – this can be repeated over time as the body becomes frayed with use.

Author’s note: The male fiddler has the one dominant claw. Fiddlers come in a variety of “local” colorations and sizes.