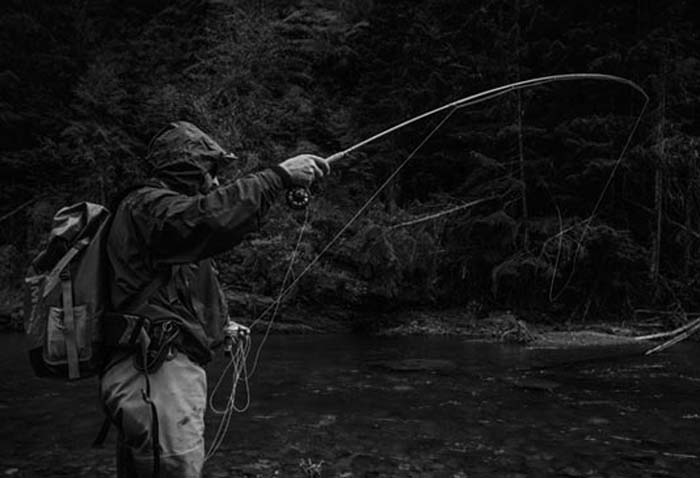 Don’t complain. Fish in the rain.

Photo by xlibber – “Rain on Water.” A commons image.

Thoughts on dealing with a rainy holiday weekend

[Steve Hudson is an award-winning author with over 20 published titles. His newest book, Chattahoochee Trout, is an insider look at fishing the many-faceted Chattahoochee River. You can read a review here.]

[dropcap]O[/dropcap]ver the years, I’ve learned a few things about fishing when the weather is as wet as the water. Here, in no particular order, are some of the things I’ve picked up along the way. They’re insights that have helped me to have some good days on the water even when that water is off-color and high, and maybe they’ll help you salvage a few hours of decent fishing this rainy holiday weekend too.

Rain means high water, and high water means tough wading and potentially dangerous rivers and streams. Do not fish any water, no matter how appealing it may seem, unless you are absolutely certain that you can do so safety. If there’s any question at all, put off your fishing until another day.

Similarly, remember that rain is often accompanied by lightning, especially during the summer. If you hear even distant thunder, get out of the water immediately.

One more thing to think about is staying warm. You wouldn’t think that would be a problem in late spring and summer, but the fact is that rain can be much colder than you might expect. Wear a waterproof and breathable rain jacket, and always be alert to any signs of becoming chilled. Hypothermia really can be an issue, even during the summer.

When rain dumps in a stream’s watershed, all that water eventually ends up in the stream itself. That brings the stream’s level up, often to unwadable and unfishable levels.

One possible way around that problem is to go upstream. Rain events can turn the lower reaches of a stream into a raging torrent. But by going upstream you might be able to dodge the impact of the rain and find fishable water. There’s a chance that upstream sections won’t be impacted as much as the water further downstream. In fact, as you near the headwaters of a stream, a little extra water and a little bit of color in the water can actually help you by making the fish less spooky.

I’ve had some good days of fishing even when it’s rainy simply by going upstream.

Remember, that rain forecast may be localized

Of course, finding that rain-free part of the watershed can be a matter of luck as much as anything. But that’s true of fishing too. Don’t hesitate to chance it. After all, being outdoors looking for fishing (even in the rain) is better than being indoors just thinking about looking for fishing!

Look for the calm spots

One inescapable impact of rain in any watershed is that the creek or river will be flowing high and strong.

But there will be still be calm spots – and that’s where the fish will probably go as they seek to get out of the fast water.

Where are those calm spots? Look behind rocks…in eddies…near undercut spots…in other words, anywhere that anything breaks the flow. All of this assumes, of course, that you can reach such areas safely. But if you can get within range (often not a problem on smaller flows) you may be able to successfully tempt a fish or two.

This kind of situation is ideal for high-sticking or Euro-nymphing with a very heavy nymph. Using a long rod, you can reach across fast water and drop a nymph into the calm spots…and high-sticking allows you to keep that nymph in position long enough to get the attention of any trout which happens to be there too. It’s a remarkably effective strategy when rain has impacted the water.

Here’s a rainy-day lesson that we can all learn from tailwater trout anglers.

Experienced tailwater fly fishers know that one of the best times to fish for really big browns is when a tailwater is high – if they fish right up against the bank.

That’s almost counter-intuitive, but think about it for a moment.

When a river or stream is high, most of the flow will be fast and off-color. However, the water directly adjacent to the banks may be a little bit clearer and will usually be a bit slower too. Minnows will take refuge in the relatively calm water right along the bank, and that in turn draws big fish to the banks too.

I recall standing on the bank of one of my favorite streams one afternoon after several hours of heavy rain had brought it up and “muddied” it significantly. The main river was extremely cloudy. However, a narrow zone of slower water right on the bank (and I’m talking about a zone less than a foot wide) was just a little bit clearer. I could see minnows moving around in it, but what really got my attention was the big troutish shape that suddenly materialized below them as it raced in to grab one of those minnows for dinner.

That made a believer out of me, and now I look for those slightly-clearer windows any time I’m fishing in the rain.

If you’re a terrestrial insect, being in a rainstorm is like being bombarded by very large artillery. Every raindrop is hydrological cannon shell, and if that drop happens to hit you then it’s probably going to knock you off your perch and possibly into the water.

Fly fishers who understand that fact often switch to terrestrial patterns during and especially following a rainstorm. Sometimes they’re imitating big bugs like hoppers or beetles that might have been washed in and that are struggling on the surface; other times, they’ll go with subsurface flies – especially ants – to mimic critters that have washed into the flow and that are captives of the subsurface currents.

As you might guess, the places to target with these terrestrials when the creeks and river high are those small areas of relatively clear or relatively still water. And keep using them even as the rain quits and the stream drops and clears. There will still be plenty of these bugs (and plenty of bug-hungry fish) in the water

Check out the ponds

When it rains, streams often come up (and become very hard to fish) fairly quickly. Ponds, however, show the impacts more gradually. Sure, the “upstream” end of the pond may muddy up a bit. But on a pond of any size, it will take a while for the muddy water to work its way all the way down. That can open the door to some good pond fishing during a rain event as long as you focus on the unmuddied water some distance from the point where feeder streams come in.

I love to fish bluegill ponds during or right after a rain event. I put on a big ol’ buggy looking subsurface fly of some sort (a Rubber Legged Dragon or a Brimbuster can be ideal), and I cast toward brushy areas. I let the fly sink and then work it slowly to me, repeating the process until a big bluegill happens along to see what the rain might have washed in. That’s when things get exciting! 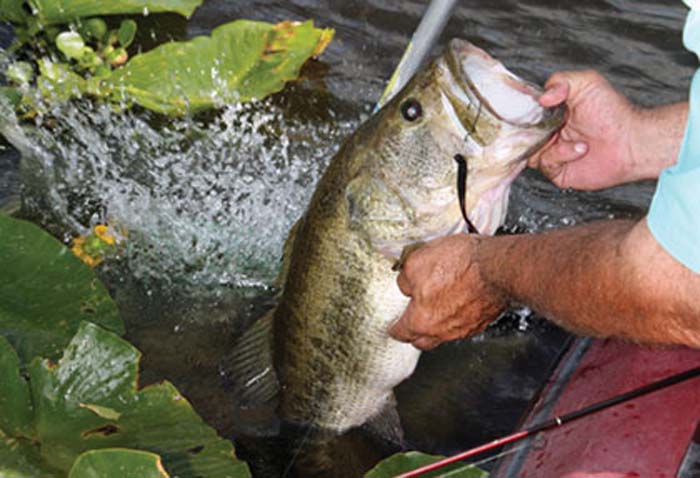 Ponds have a tendency to be less impacted by rain runoff than creeks and streams. If there is an ingress and egress, the edges of the flow through the pond will, generally, stay clear. This guy went for a leech. Image by Game & Fish Magazine.

One thing to remember about late spring and early summer rains is that, in any given spot, they sometimes last for only a little while. Sure, that can make a small creek come up quickly. But once the rain stops, that same creek will drop fairly quickly too. If you’re patient, and if you don’t mind hanging around while the water drops and clears, you can find yourself in the perfect position for some memorable fishing.