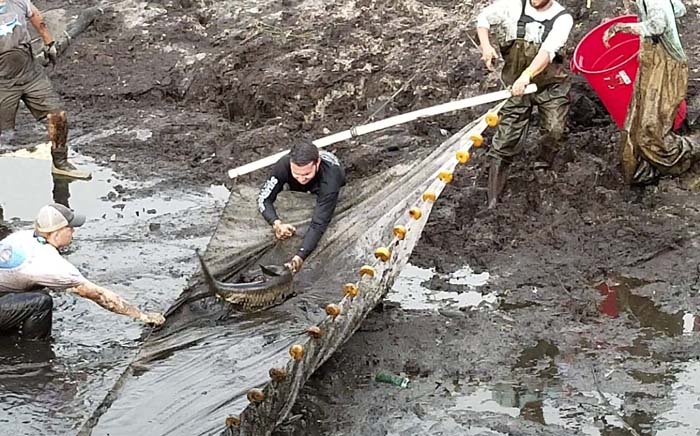 Responding to calls from concerned anglers, the conservation organization acted quickly to catch and relocate tarpon of all sizes from the isolated and rapidly draining pond, where local anglers had been fishing for years, even decades. After gaining permission from the developer and property owner, BTT Juvenile Tarpon Habitat Program Manager JoEllen Wilson was granted a permit by the Florida Fish and Wildlife Conservation Commission (FWC) to relocate the fish, allowing them to rejoin the regional tarpon population.

“Tarpon use habitats degraded by development relatively frequently, but without a permanent connection from this pond to the estuary it’s unlikely that they would have been able to emigrate,” said Wilson. “Our efforts to move them to a connected habitat gave them that chance.”

The decision to relocate the fish was due to exceptional circumstances and is not part of BTT’s usual activities in the Juvenile Tarpon Habitat Program, which focuses on identifying and restoring critical juvenile nursery habitats. So far, BTT’s studies in southwest Florida have found that tarpon in such degraded habitats exhibit poor growth rates and usually have a harder time emigrating from them as they grow bigger, which means they don’t contribute to the adult population.

With a generous amount of help, the BTT team was able to relocate over 60 tarpon ranging in size from 12 to 40 inches—a hard-won success after a day of seining and cast-netting in waist-deep mud and silt.

“We are grateful to everyone who participated in this unique relocation effort,” said Wilson. “This would not have been possible without the guides and anglers in Tarpon Springs who alerted us early, the developers for working with us to pump down the water, FWC for quickly issuing a relocation permit, and the Suncoast Youth Conservation Center for the use of their seine net.