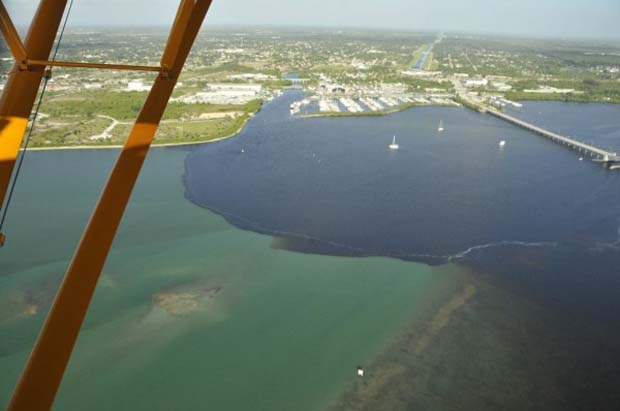 Environment: Black Death, political corruption and the making of a fine corpse

Bring all your garbage and dump it into Lake Okeechobee. It is OK. Big sugar does it. No problema. Ah, but they offer political “contributions,” so bring cash. 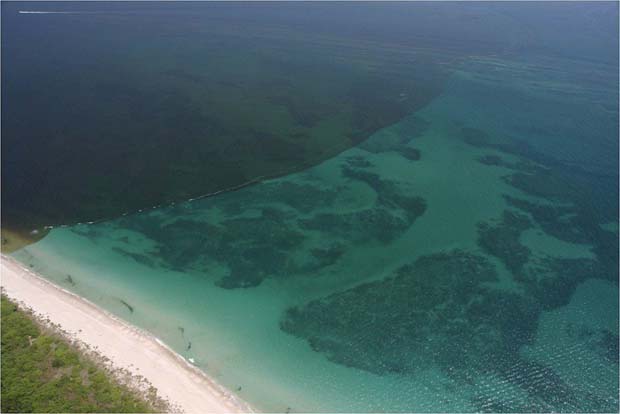 A “black tide” of water from agricultural land and Lake Okeechobee floods into the St Lucie River/Indian River Lagoon estuary and (here) extends to near shore reefs off of Stuart and Jupiter Island. Jacqui Thurlow-Lippisch (Thurlow-Lippisch SLR/IRL Archives)

[dropcap]M[/dropcap]ost believe Illinois has bragging rights for political corruption, voter abuse and outrageous hubris. Who could challenge that? After all, four of the last seven governors are either in jail or just getting out.

Most us are aghast at the recent drinking water pollution issue in the town of Flint, Michigan.

Whoa, not so fast. Sorry, Florida is the Division 1, decades long title holder of political corruption, voter abuse and water pollution and it is beyond your wildest imaginings

Compared to Florida, Illinois’ record only measures up to playground corruption and Flint’s water pollution problem equivalent to a leak in a community swimming pool.

Florida is the unparalleled champion and “guardian” of political and corporate corruption with blatant voter abuse coming off the “bench” to cement things corrupt.

Only in a third world?

Florida’s most virulent polluter gets taxpayer subsidies in the billions (they are responsible for way over 50% of all water pollution). A rail line is in the works to transport Middle East origin cargo (un-inspected) through quiet neighborhoods (think property values and way of life), an environmentally sensitive sanctuary, and believe it or not, right next to Cape Canaveral and the Trident Missle facility. WHAT! Yes, and the rail cargo line could  run 24 hours a day, and come-on-down ISIS.

Seventy six percent of the voters in Florida approved an amendment to use non-taxpayer dollars (billions) to buy sensitive environmental land and keep those lands from development forever. The politicians said F%$k you voters. Yes, they really did. Now, they are spending the earmarked dollars on desks, salaries and perks.

The destruction of real estate values for 60 miles in either direction from Lake O has been devastating to thousands of property owners – costing billions in lost property values.

Corruption, voter abuse and pollution in Florida has reached, finally, national attention. The following authors undress the third world politics of Florida, the culprits (one of whom recently ran for president) and the others all in cahoots – you really will not believe it.

A huge backlash of criticism has resulted from the latest Lake Okeechobee releases. Here’s what they are saying:

The politics of environmental restoration, the Everglades Forever Act, and the power of Big Sugar. A “Real Clear” overview.

Most embezzlers try to conceal their thefts, but not in Tallahassee. The looting of Florida’s Amendment One conservation funds took place in broad daylight, orchestrated by two poker-faced swindlers named Andy Gardiner and Steve Crisafulli.

Aaron Adams is a PhD, Director of Science and Conservation for BTT, which is a science-based conservation organization applying research findings to conservation needs for coastal fisheries. Aaron is also a BTT board member, Research Associate Professor at Florida Institute of Technology, published author and licensed Coast Guard Captain. Aaron and the BTT organization just might be the Joe Frazer in all of this. Once engaged, they do not disengage.

Florida’s Black Tide. How Sugar Drained the Everglades (and Sent a Flood of Polluted Water Elsewhere).

A “black tide” of water from agricultural land and Lake Okeechobee floods into the St Lucie River/Indian River Lagoon estuary and extends to near shore reefs off of Stuart and Jupiter Island.

The black line of death creeps down the coast—horrifying residents, tourists, and snowbird retirees and bearing witness to a century of bad environmental policy and water-systems mismanagement. Back in the early 20th century, developers, big agricultural interests, and the federal government agreed that Florida would be more useful without those pesky swampy bits. The Army Corps of Engineers built a massive dike around Lake Okeechobee, blocking the Everglades’ main water source. When the Herbert Hoover Dike was completed, thousands of acres of pristine sawgrass prairie started drying up—and dying—almost immediately. (Watch bullsugar.org video)

. . . freight trains will also pass through once quiet neighborhoods. over environmentally sensitive and protected areas of the North Banana River, Indian River Lagoon and part of Merritt Island. But shockingly, these same freight trains will be loaded with uninspected cargo from the Middle East (only 2% of ship containers get checked). Too, the freight trains will parallel sensitive military installations (Trident Sub Base) and Kennedy Space Center. Talk about giving terrorists like ISIS an easy target!