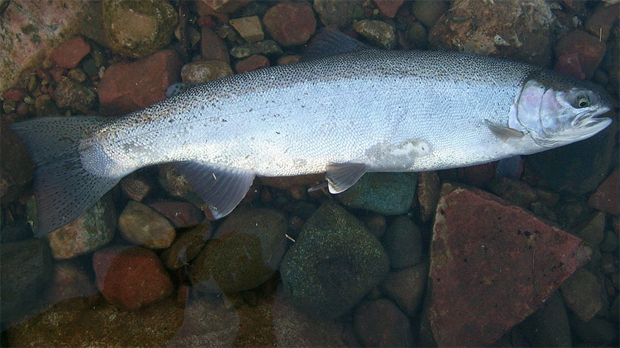 One of the best parts of my job is sharing scientific research with anglers, who seem to have an almost insatiable appetite for understanding steelhead. Sharing information is important not only to help anglers understand steelhead, but also because more informed anglers make better advocates. Wild steelhead will need as many advocates as possible if we are to sustain them and their fisheries over the coming decades.

So here is the first of two blog posts I’m writing on recent steelhead studies that illuminate significant management challenges.

Juvenile Steelhead Mortality and its Likely Causes in Puget Sound

Megan Moore, a NOAA scientist, and several co-authors published a study last October that examined steelhead smolt survival and migration in Puget Sound. Marine survival has been a big problem for wild and hatchery steelhead migrating through the Sound, particularly for fish coming out of the South Sound. They tagged wild and hatchery smolts from 2006-2009 from a number of rivers across Puget Sound. They found three major results. First, only a relatively small proportion of smolts made it out of Puget Sound, and as expected, wild smolts (16%) survived at higher rates than hatchery smolts (11.4%). Second, survival between populations was highly variable, with the lowest survival being 0.8% for the Skokomish hatchery in 2009 while the highest was 39.3% for Big Beef Creek wild fish in 2006.