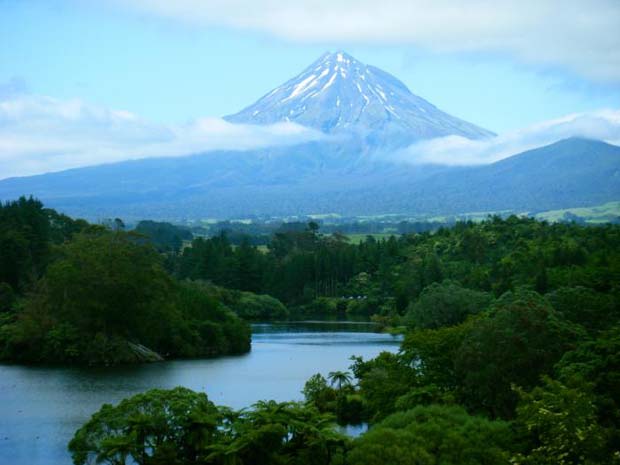 Fly fishing has its rewards by Skip Clement

[dropcap]U[/dropcap]pon retiring, a fishing adventure to New Zealand was planned with an open return date ticket. In the plans were also fishing Australia’s offerings – including Tasmania. A two month long adventure – give or take a week or more. The first leg to New Zealand was the only booked flight because being locked into a timetable wasn’t what this retiree wanted to do. It was January when my create side bit me.

Three phone calls were made to arrange things, one to a travel agent friend in Pittsburgh, Pennsylvania to book the flights, one to an RV rent outfit in New Zealand to reserve a camper and the other to a motel for the first day in Kiwi-land. All of the latter done one day before a late morning departure the following day.

Pittsburgh to Los Angeles is a haul. My layover there provided an opportunity to visit an old Steeler teammate and have dinner at his favorite eatery. We swapped glory days tales.

The flight to Auckland was broken up by a fueling stop in Papeete, which had an open – no doors airport with expansive overhangs to protect from rain. It was 4 a.m. and a cool 95 degrees F – dripping with humidity. Soaked, re-boarding was an hour and a half later.

I was somewhat in a fog upon landing in Auckland – no sleep does that. It was Sunday afternoon by the time I grabbed a cab to the motel, which was fortunately only 20 minutes away – it was mid-afternoon. The motel’s pool was refreshing and a shower even more so. I slept the sleep of the dead.

The RV guy brought the vehicle to the motel at 11 the following morning. Already packed up, I was loaded and ready to go in less than 30 minutes.

My first stop would be the fly shop in Rotorua – a three hour hike south down highway 27. Hamills Fishing and Hunting was a great shop with a very helpful staff. My take-away was that my fly collection was pretty-much useless except for a few standards: muddlers, royal coachman, March Brown and caddis and May flies. My pre-tied, 12 -foot leaders were short by 6- to 7-feet! However, easily mended.

I got a tip from a guy who was in the fly shop buying some tying materials. Serendipitously, we finished up at the same time and once outside he approached me on the sidewalk to tell me about a guide named Hughie McDowell. He gave directions to Hughie’s and I thanked him. McDowell lived in Ngongotaha, 15 minutes away. Hughie answered the door, we spoke, and he invited me in for tea.

Hughie’s cottage had all the earmarks of being lived in by a dedicated bachelor working on several yet to be finished projects, and that newer furniture wasn’t on his mind. There were books galore and asunder, a tying desk dominated the main room with marvelous flies hanging on rows of mono lines strung across the width of the tying desk and there were newspaper clippings piled on a table suggesting some sort of order. Oddly, after an hour there, there seemed to be some order to it all. McDowell managed cups of tea for both of us. 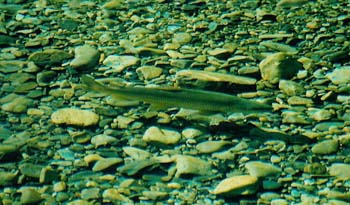 Hughie had the Irish gift of gab along with a wonderful dry humour. We hit it off. When I asked about guide fees and days available, he quoted per day only. I offered the month rate and suggested a better deal – use my RV and I pay for all the food. He didn’t agree to anything I’d offered up, but said instead: “Let’s go fishing. Meet me at 4:30 tomorrow morning.” What it turned out to be, and I didn’t know then, was that it was a test to see if I was worth it as a fly caster-fisherman. Fortunately, I passed muster. Trout season had just opened. With the exception of a few days each week; Hughie was not taking new clients and just fished his regulars. I felt honored and I booked Hughie for the better part of my stay. We’d explore North Island for the next six plus weeks, including some helicopter fly-ins.

Hughie had already written a book about fly tying, New Zealand Fly Tying; The ten-thumbed beginner’s guide, which was first published in 1984. McDowell’s accomplishments and reputation were equal to Florida Keys’ legend Steve Huff and Bahamas greats – the Pinder brothers, Smith brothers and Docky Smith. McDowell didn’t own a boat or a vehicle, built his own nets, tied, of course, all his flies and fashioned every fly fishing accoutrement out of something designed for another use.

Walking out to inspect my RV, he asked to see my flies, it was a quick exam – he said nothing but, “See you in the morning Yank.” Hughie showed me the way to an RV park –  just 30 minutes away.

Fly fishing for brown and rainbow trouts in New Zealand isn’t like fishing for them in Argentina, Alaska, Iceland, Canada or any destination in the U. S. The water in New Zealand is so clear that it’s transparent. If it was still water you’d swear there was no water there at all. Water depth misjudgements are common; it looks like 3-feet deep, but it’s 5-feet deep. I took more than one unplanned dip.

After just a few days with Hughie I realized how remarkable an angler he was, and how intense he was. He was quick to scold, but unlike many guides I’ve known he’d give how-to-correct the errors instructions in detail and with demonstration.

New Zealand trouts are extremely wary because they’re in such gin-clear water. Leaders are up to 19-feet long and that alone requires better than pretty-good casting skills. Eighty percent of all fishing we did was sight fishing and I didn’t see half the fish Hughie pointed out, but I got better and better at it. The biggest percentage of trouts cast to were with dry flies or nymphs. The other 20% was streamer or weighted flies fishing under cuts of the banks on rivers and streams. I consistently switched from a 4-weight to a 6-weight – depending on what McDowell said was pending. Consistently, just before sunrise and post sunset produced the biggest animals. 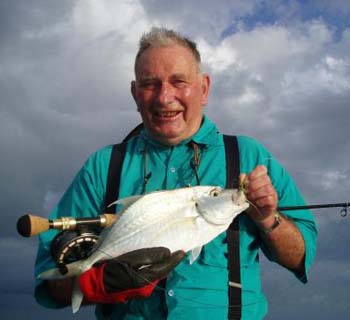 Hugh worked in the tackle industry for Killwell before he started guiding full time. Hughie also represented New Zealand six times in the World Flyfishing Championships. He has guided people like Lefty Kreh and Jimmy Buffet on both the north and south Islands. Photo www.frasercoastsportfishing.com.

What made my time with Hughie so special was, of course, his company and hilarious tales, but it was also what I learned about fishing and casting. In just six weeks I had learned more than I had in the prior 25 years. Too, being put on so many fish everyday and catching so many fish everyday is a confidence builder. My best day was about 25 trouts. The biggest fish landed was estimated to be a brown weighing 15-pounds. Most of the browns were 5- to 6-pounds and the rainbows mostly 3- to 4-pounds with the biggest 8-pounds. I’d say 70% of the trouts caught were rainbows. NOTE: The New Zealand rainbows are originally from steelhead strains so they’ll put up a tremendous fight.

Hughie knew everybody and that meant access to huge Sheep Stations (30,000 +/- acre ranches), company owned timber acreage, secret places and even onto jail property. Some days we’d have to open and close behind us as many as five or six gates before getting to the target stream or river. Hughie knew exactly where to go, there was no “fishing” expedition to find out where the trouts hang. These places never got fished so the trouts were a little more willing. We fished big water, lakes (borrowed row boat from landowner), stream no wider than a one lane road and helicoptered into pristine, remote mountain streams that were inaccessible even by foot. There are no bugs in New Zealand so we’d get our sleeping bags and just lay down and go to sleep with the sound of the stream as our lullaby. The first helicopter in stop was for three days and probably the best trout fishing money could buy. It was there that I caught the 8-pound rainbow.

I never left New Zealand – stayed for four months. The fishing beyond – beyond and the scenery to die for.

For travel arrangements and guiding or lodge stays, contact Frontiers by clicking here […]

Flies you will need:
The most major nymph life to be found in new Zealand is the delatuium may fly nymph (about 40 species of mayfly in New Zealand and all of them are endemic) and the caddis nymph in all its stages.

A smelt like fish called a bully is found throughout most of New Zealand’s lowland rivers and inland lakes. It is an important prey species, especially for brown trout.