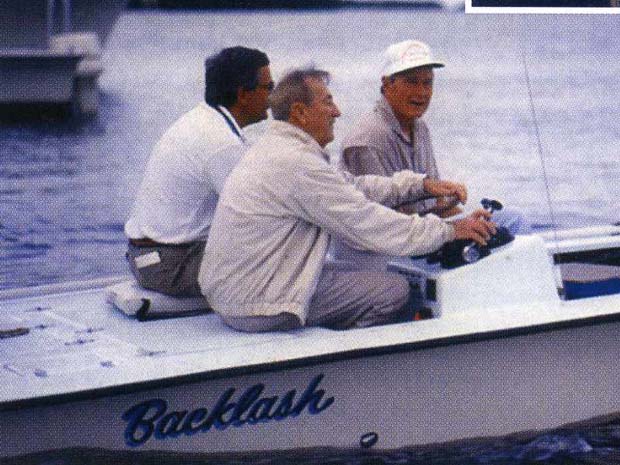 [dropcap]I[/dropcap]t is with deep sadness that we announce the passing of George Hommell Jr., one of the founding members of BTT. George will be remembered as one of the pioneers of fly fishing in the Florida Keys as well as one of the early champions of fishing conservation, and leaves behind an indelible mark on the fishing world. George moved to the Keys in 1945, at a time when fly fishing was in its very early days and began fishing by himself, eventually becoming a full-time guide. George is credited with refining the techniques for poling for bonefish, was one of the first people to trailer his boat around to find fish, and also developed a number of important shrimp fly patterns, including the Hommell Evil Eye. George guided president George H.W. Bush and was fishing buddies with baseball legend Ted Williams, helping him initiate the infamous Gold Cup Tarpon Tournament in 1964.

George had many fishing successes, but is perhaps best known for what he did off the water. In 1967, George, along with fishing clients Carl Navarre and Billy Pate, founded World Wide Sportsman, a shop that was one of the first of its kind and remains one of the great landmarks in the Florida Keys. World Wide Sportsman made saltwater fly fishing more accessible and helped to grow the sport, and was also responsible for a number of innovations including the Billy Pate Reel, which changed the saltwater fly fishing world forever. In 1997, they sold the store to Bass Pro Shops, and that new shop remains a Keys landmark today. Bass Pro Shops founder Johnny Morris decided to keep the name World Wide Sportsman in part because of his tremendous respect for George. While his health permitted, George still came to the shop almost every day at the crack of dawn to greet customers. In the 1970s, George became one of the early proponents of fishing conservation. In the early days of saltwater fly fishing, guides killed most of their catch. By the 1970s, Keys guides started to notice that catch numbers were declining, and as part of the Islamorada Fishing Guides Association, George became one of the first proponents of catch and release fishing. He promoted tarpon and bonefish protection and Everglades Restoration through World Wide Sportsman, promoted awareness about the importance of seagrass preservation, and under his leadership, Bayside Marina became the first certified  “green” marina in the Keys. In 2002, George was named one of NOAA’s environmental heroes in recognition of his numerous contributions to conservation causes.

In one of his most significant conservation initiatives, George was a Founding Director of Bonefish and Tarpon Trust (then Bonefish and Tarpon Unlimited) in 1998, whose mission is committed to sustaining and enhancing the flats fishing for future generations.  BTT Chairman Tom Davidson noted that George being an enthusiastic supporter of BTT was vital to the organization’s success. He will be dearly missed by BTT and the greater fly fishing community, and will always be remembered for his incredible contributions to the sport of fly fishing and his deep commitment to conservation of his beloved fishery.

In his memory, BTT has set up the George Hommell Jr. Florida Keys Habitat Fund, which will be used to support BTT’s efforts to bring back the golden years by bringing Keys flats habitats back to health.  Donations to the fund can be made online here, by mail to 24 Dockside Lane PMB 83 Key Largo, FL 33035, or by phone at 321-674-7758 / Alex Lovett-Woodsum <alex@bonefishtarpontrust.org