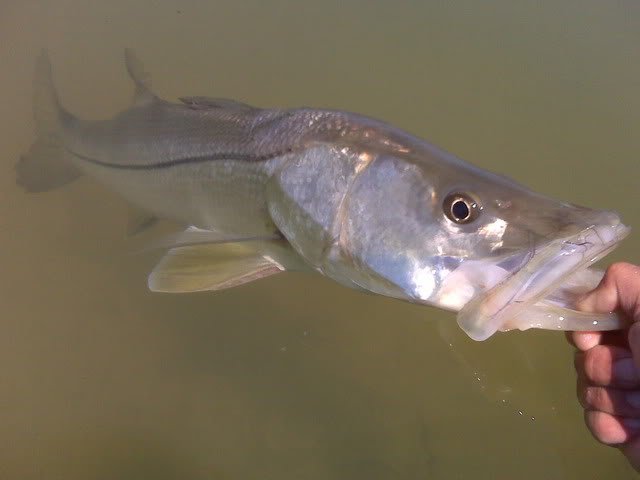 Feature: Switchin’ in the surf and lovin’ it

[dropcap]S[/dropcap]tarting around late May and into the summer, snook leave brackish and freshwater to congregate in large schools in Florida’s saltwater inlets and passes to spawn; typically it’s around the full and new moon phases and at first and last light. Between spawning, they use the beaches as their McDonald’s – especially close to the inlets from which they came.

Last summer, like most summers (and looking forward to this one), I drove up to Palm Beach, Florida from Ft. Lauderdale to fish the under-populated beach of MacArthur State Park. It’s a prolific fishery most mornings, days and evenings with transients like tarpon, snook, crevalle jack, bluefish making your day. In the summer, it’s snook time. 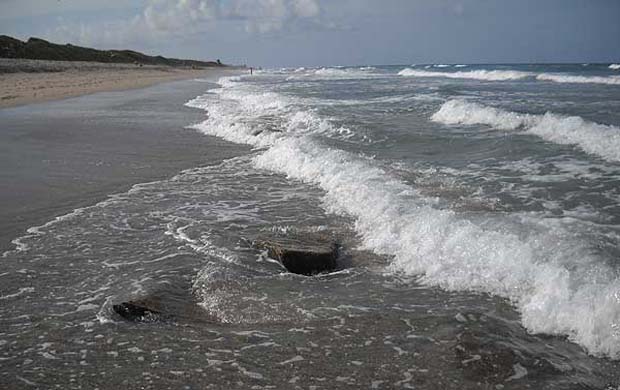 One day on the MacArthur State Park beach while fly fishing for snook just after dawn, I looked north and saw a guy pulling in snook one every other cast with what I mistook to be a Spey rod – using a two-handed overhand cast. It appeared odd but at the same time silky smooth and with less effort than me with my 9-footer trying to get a white deciever past the breaking surf. I was huffing and puffing and maybe getting 60-feet of line out against the stiff breeze; coming nowhere near the rhythmical casts of the Spey guy who was in the 80-foot league and easily breaching the breakers.

As time went by, my interest overwhelmed me. I had to find out more so I introduced myself to the angler with the big stick. It turned out he was a visiting Scotsman and London anesthesiologist by the name of Nicholas Campbell. We began talking and quickly hit that familiar comfort zone so I started questioning Nick about what intrigued me – his Spey rod and casting technique. He explained that it really wasn’t a traditional Spey rod but a switch rod. He said, “A Yank invention, in fact. This one is an 11-foot 8-weight Switch rod from my London rod maker. The line is RIO’s Short Tropical Outbound WF8F/I,clear tip, head weight 330 grain, head length 30-feet, sink rate1.5 ips and overalll length 100-feet with an added 10-foot Mow (loop to loop) attached to a 9-foot tapered leader and a 1-foot 20-pound test shock. The combination of which manages heavy flies in the wind and gets the fly down fairly deep.”

He demonstrated the Spey cast and the two-handed overhand cast and said there are other casting techniques using a Spey or switch rod. “For surf fishing the cast I’ve been using is all that’s required.” he said. “Give it a go?” he queried. Sure, I said. I liked the two handed overhead cast because it had a relationship to what I was already familiar with. Once comfortable, I used the two-handed water-haul technique and that solved all my shoulder problems and wth a little Scottish coaching, I was “feeling” it in about a dozen tries.

When Nick said he was going to take a smoke break he told me to have at it with his set-up, and so I did and caught a nice 10-pounder. We fished through the lunch hour chatting about this and that and caught a dozen or so smallish snook. Only four of which were on my scorecard. When Nick said it was time for a single malt. I invited him to a late lunch, he accepted and I followed him to a place he was obviously familiar with. We had a malt or two along with a few laughs and some tall fishing tales.

The very next day I invested in a four piece 7-weight fast action Switch rod from Echo (Tim Rajeff Sports). Then I bought the RIO Tropical Short Outbound WF8F/I and rigged exactly as Nick had. I used my Nautilus NV 8/9 weight reel to accommodate set-up. It worked out perfect. The rod was a little faster than my remembrance of Nick’s rod. NOTE: I think it would be really difficult for a beginner to get any feel with really stiff rods like mine or Nick’s. So if you’re new to the game – head to your local fly shop and test drive a few before you buy. You might try over-lining by one or two line weights to help you feel the rod load better. 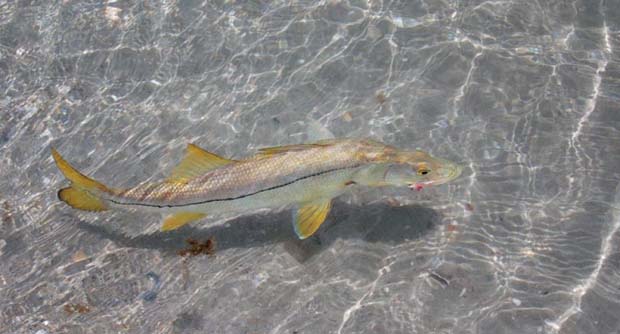 Gotcha, a nice snook in the surf.

The first thing that gets your attention when you grab a switch rod is, of course, the length as opposed to your normal 9-foot rods. Then there’s the thickness at the butt of the rod and then the extended section of grip well beyond the reel seat. The rod weight also takes a little getting used to.

Casting well takes a little getting used to as well, so pretend you’re a golfer and head to the practice range. There are several good videos (see below – it’s very good) on switch casting. Be sure to watch and re-watch after practicing.

Keep my head in the sand, please

Maybe you’re from the east and think switch rods are toys or just sawed-off Spey rods. If you go out west you’d be hard pressed to see a fly angler fishing the surf with anything but a switch rod, and on the water drift boating in the west or Alaska, they’re becoming predominant.

I’ve recently had a fly shop rat tell me switch rods are only marginally good for the beach and not usable on a flats boat or bay boat. When asked if he carried them in his store he said, “No.” When asked if he owned any he had the same reply. He was beginning to growl when I told him he was full of it and I said: How could you have such a cemented opine about something you know almost nothing about? He walked away – veins popping in his neck.

Well, I guess I’m a convert and you know how we converts can be.

I’ve since acquired a 6- 7-weight switch and it’s my go-to rod for just about everything I fish for, which is the Everglades canals for largemouth bass, the surf when the fishing is good, lakes and spillways (tarpon, snook and crevalle jacks).

I’ve had no trouble using my switch rods on a flats boat or on a bay boat offshore. Stowing a switch on a boat can be a bit of a hassle. I break mine down into two pieces (rigged and ready to go) and rubber-band them together. It’s a snap to put it together and start fishing.

FYI: If you have arthritis, elbow or shoulder issues you’ll find slinging a switch far,far less taxing with less or no fatigue. By working two hands into the casting equation you lessen the demands on your dominant hand/arm.

There are only a couple of tactics that work really well for snook in the surf. First, if you’re fishing at first or last light of the day, some top water noise using a surface popper works best. At first and last light all fish are adjusting to the light change and their vision struggles to adjust and that’s why poppers work so well.

Second, around mid-morning when the sun is high enough, roughly about 10 o’clock, you’ll begin to see snook swimming in the troughs or out on the first row of sandbars. When the ocean is calm and it’s a cloudless day, you’ll be able to sight cast to snook looking for a cheap meal. In bright sun always use bright flies – land them softly so as not to spook these wary predators. If the water is dirty and it’s an overcast day, then use darker flies.