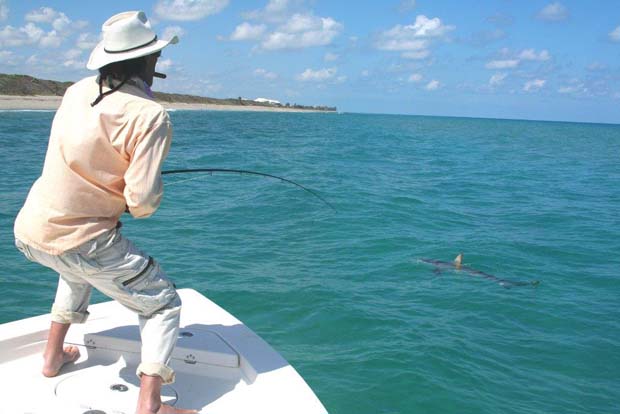 Editors’ Note: Our first coverage of spinner sharks was in Fly Life Magazine in 2011. The original story was also written by Steve Kantner as is this updated story.

“All’s fish that comes into the net” or so the saying goes. But the quicksilver dervish at the end of your fly line – which keeps disappearing at an alarming rate – would barely qualify. “Spinner” sharks (Carcharinus brevipinna) derive their name from a signature proclivity that we salt water anglers are well aware of: According to Peterson’s Guide to Atlantic Coast Fishes, the species is “known to fishermen for its spectacular spinning leaps.”

Whenever they jump, the line (or leader) wraps around their bodies, which are covered with scales known as dermal denticles. These, in turn, are tiny teeth, and combined with the shark’s contortions, they provide a predictable outcome to most spinner shark hook-ups – within a matter of seconds – unless the angler is extremely-lucky, or if he’s taken the necessary precautions. The latter include using “special” leaders, as well as gearing-up with the proper tackle.

There’s a lot to learn about outwitting spinners, and rigging is just a part of it. A fully-grown spinner runs-off hundreds of yards in less time than you’ll take to read this page. So while cut-offs rank high on the list of impediments, getting “spooled” is another option.

There’s the physical side of it, too

Interested parties need strength and endurance to go the distance with these cartilaginous dynamos. I’ve heard countless reports of seasoned anglers who were unable to “close the deal.” The rigors of battle get redefined when you’re battling a fish that will out-fight a tarpon. So while catching a spinner isn’t reeling-in a whale shark, these welterweight pugilists fight all the way – which necessitates plenty of lifting.

All that speed and pugnacity are compounded by the spinner’s habit of abruptly changing directions. And the more slack line you give them, the further they’ll run

I remember fishing with Marty Arostegui, when he was attempting to break a lemon shark record. We were with Captain Ralph Delph, out of Key West, and while I pondered my role in this epic quest, a spinner appeared in our chum slick. For reasons that should be apparent, it was I who was given the nod.

The spinner grabbed my fly and took off running. It may have weighed all of 100 pounds, but it burned-off 300 yards of backing before deciding to jump. That initial spiral led to several others, before devolving into a paroxysm of somersaults. By then, the shark had taken-out so much line that I could barely keep up with its whereabouts. The drama concluded with a final jump, when it summarily fell on my leader.

That’s a typical scenario – but inspirational. After all, who wouldn’t remember the sound a fly line makes as it rips through the water like tearing cardboard? But what sticks in my mind about that particular incident were all the cuts on my hand. It all happened so fast that I allowed the backing to touch my fingers. That should serve as a warning to all of us.

Speaking of speed, I was with Ted Juracsik when my fly – a billfish-style streamer – slipped off my rod guide and fell into the drink. It started trailing beyond the tip of the rod, which I’d propped against the transom. We were anchored in 15-feet of water, and enjoying some wonderful bottom fishing, but the current was really running. Then suddenly my rig tried to jump into the Gulf. The best color fly for spinners, or for that matter any shark, is orange or orange. Photo by Steve Kantner.

I got to it just in time, while a good-sized spinner took-off on its run. 200 yards later, my backing went slack as the shark broke the surface in a series of jumps. There’s a lesson here, as well: Namely, these fish have the eyes of an eagle, and they aren’t afraid to approach a boat. Have I captured your interest? Is your pulse rate climbing? So where do you go in order to hook one, or is it the other way around?

The species inhabits all the world’s warm waters. However, the epicenter of their abundance – at least, in the North Atlantic – lies just off the southeastern Florida coast, in an area that extends from Fort Pierce Inlet, south to Deerfield Beach. That’s where huge aggregations gather every winter – ostensibly for the purpose of spawning.

Several Palm Beach or Jupiter guides now target spinners, which provide unequaled action – especially on fly tackle. The fishing, for the most part, is visual, with the best of it taking place over a white sand bottom within several hundred yards of shore. High season, when spinners invade by the thousands, runs from early-January through the end of April. Some, however, may be found here all year.

It’s a sight worth seeing if you haven’t already: The sharks delight beach-goers, as well as anglers, as they spiral from wave crests and surf down the swells. While they scatter food fish and patrol the wash, they also pose for the evening news. The news crews in their choppers are a common sight, as they film the sharks for their nightly broadcasts.

For a short time each winter the sharks become the toast of the townships. But while they gladden the hearts of sightseers, they force lifeguards to close the beaches. Then, every year there are mishaps – some which lead to fatalities.

The spinner’s ferocity is legendary:

While usually content to mind their own business, they’ll change their minds at the drop of a hat. Or better, a drop of blood

They’ll attack everything from baitfish and bluefish, to hapless surfers and the anglers who hook them. Then, once they choose a victim, the odds of escape teeter between slim and none. That showcases their exceptional eyesight – exceptional for a shark.

Their first major incursion into South Florida waters coincides with the fall mullet migration – an event that begins in September. Then their numbers increase throughout the winter, until they become the scourge of the surf. They love to play havoc with pompano fishermen, by stealing hooked fish and cutting-off lines. But there’s something to be said about a predator this wily: Fly fishers typically view sharks as plodding creatures that they lure within casting range with large amounts of chum. But with spinners it’s more of a hunting game, where some anglers view chum as optional. While it never hurts to have a few mackerel or bluefish on board, by no means is it a requirement. In fact, we hook our share of cruisers.

Tarpon fishing celebrity, Andy Mill embraced these sharks like a duck does a wetland. After several decades of “chasing silver,” he now has a distraction between tarpon migrations. I refer to his exploits as “chasing chocolate,” and hope they end-up in a book like his first one, or somewhere on TV. Meanwhile, no one fights big fish any harder, a technique he honed on tarpon. There’s a lesson here. Andy Mill, author of “A Passion For Tarpon,” uses the butt end of the rod and his legs to shorten the fight. Most anglers, fly or spin, use the tip to lift by high-sticking and twisting their bodies – lengthening the fight and endangering the fish. Photo by Steve Kantner.

That’s what you need here, in this shifting arena where sharks hold sway. Either give it your all, or face the consequences, which might mean losing your rod and reel. Or worse, if you’re unlucky.

Something else Mill refined is the process by which spinners are lured within casting range. While neither he nor I would argue that chumming is optional, we both agree that it sweetens the pot. Part of the fun of spinners is getting them “fired-up,” and watching them race for the transom. While most local guides either anchor or drift, Andy uses a bow-mounted trolling motor to sashay back and forth – up-current from the schools – and lure “lit-up” individuals from 100 yards out. And when these fish get close, they hit.