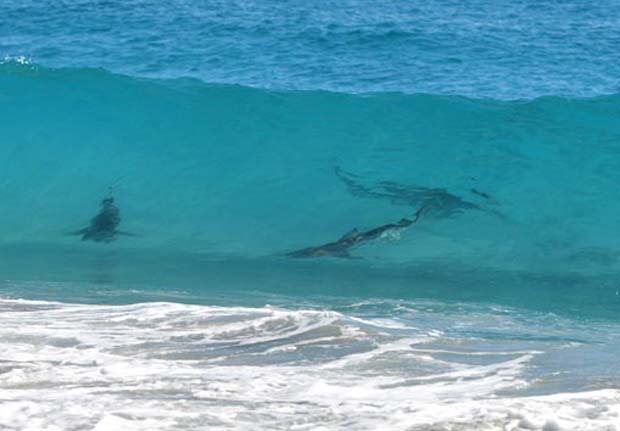 Editors’ Note: Our first coverage of spinner sharks was in Fly Life Magazine in 2011. The original story was also written by Steve Kantner as is this updated story.  Click here to read Part 1 . . .

[dropcap]L[/dropcap]ater in the season – when the action moves offshore – we typically target larger bull sharks. It was late July or August, when Pat Ford and I were fishing out of Jupiter with Capt. Steve Anderson, who no longer guides.

We had caught and released numerous false albacore. But when the action subsided, Anderson decided to spark it by butterflying the carcasses of several that we’d been unable to release. He hung them over the side, and we had sharks all around us in minutes. Time, I figured, to select a target.

With sharks, that target is a well-defined window that lies directly in the path of their noses. The cast must be perfect in order for a shark to see the fly simultaneously with both eyes (large sharks supposedly have poor vision). Meanwhile, the trick to making them hit is to allow it to remain absolutely still, then just barely slide it forward when he’s a yard away and closing.

Do everything right and he blithely inhales it; too fast a strip and he’s gone for good. Spinners, however, don’t require this much attention. And when I reached for my water bottle, one appeared of nowhere. Or should I say, through a school of bull sharks?

There’s something surreal about watching Micron disappear – while a 100-pound propeller twists through the air past the boat. But it’s not as surreal as lifting a shark in 120 feet of water – one that, luckily, gave up before I did.

Ford and I fished with Anderson a second time – this time in March – with the intention of experiencing more of the same, only this time in shallow water. We ended-up getting our money’s worth. Fish on! Andy Mill sets the hook on an aggressive spinner just off the sand in Palm Beach, Florida. Kantner photo.

The local guides run in 10 to 15 feet of water, while staying on the look-out for “jumpers.” Plus, you’ll see the sharks beneath the surface, especially when they’re traveling in packs. Spotting “cruisers” requires clear water, which we were lucky to have that day. While the spinners tend to hang-out in certain areas, the guides work together in determining when these change. We were soon anchored-up and casting to sharks.

One of the most-exciting aspects of spinner shark fishing is watching the quarry approach the boat. In some respects, they’re like monster tarpon, but here you get more shots.

I spent all morning pulling my fly away, while Ford gave his camera a work-out. However, by the time my anticipation got the better of me, the sharks turned dour and refused to bite. It had to do with the tide, I suspect, which – according to our calculations – had finally slackened. But with Anderson chumming, and the current picking-up, we eventually got back on the board. By mid-afternoon, I was hooking sharks.

In the interest of an ending, let me pull what I’ve learned together:

Having fished for spinners for a number of years, I’ve come to several conclusions: First, they bite a lot better when there’s forage around – be it Spanish mackerel, bluefish, jacks and especially, pompano – and also when the water is at least 72 degrees F. Spinners free-jump more late in the day, which offers a clue as to their whereabouts. They come closer to shore in cloudy water, as well as early in the morning. And they’re willing to steal fish off your line, while leaving a wake of destruction. Fly tackle for shark fishing ranks among the heaviest available. Since spinners – which can weigh upwards of 150 pounds – are extremely-powerful, there’s reason to err on the side of caution. Why torment these fish with anything less than a 20 pound tippet, and a rod and reel that are built to handle it?

For me, that’s a 16-weight Sage and a Tibor Pacific – the one with the deeper spool. A powerful drag that’s both smooth and capable of applying pounds of pressure is essential for this type of fishing. Speaking of reels, you’ll need one that holds at least 400 yards of 30 pound-test (or heavier) backing if you intend to land most of the spinners you hook. While it’s possible to whip one on say, an 8-weight outfit, you may end-up fighting it to death.

I prefer floating lines. Since I don’t get much thrill from “chuck-and-chance-it” fishing, I recommend rods that let you cast to the fish.

You’ll find my leader philosophy elsewhere. Meanwhile, the way I make a “bite tippet,” is by pinching an extremely-tight bend in a short piece of number-nine single strand wire (it’ll look like a bobbin-threader), and bending both strands of the loop until you’ve created at a 45-degree angle, approximately ¼ inch from the apex of the bend.

Tie a Bimini Loop in your regular tippet, and run both strands through the wire loop, making sure the mono lines-up with the wire. Take four turns down and three turns up (creating an Albright) with the loop, and pull out the tag end the same way it went in. Moisten the knot with saliva before attempting to pull it tight. As far as flies, I recommend the standard orange hackle pattern that was developed by guides in the Keys. A size 3/0 or 4/0 hook is plenty for these sharks; I prefer light but strong “designer” models that tend not to sink as fast. Kantner photo.

I use a seven-foot piece of 120-pound mono, tied to a wire bite tippet. For guys like me who get out less-often, Andy Mill recommends a one-foot section of 20-pound Mason’s that’s added near the fly line – to keep from ripping a finger off if one ever gets caught in the line.

While I have no interest in engaging in a philosophical debate as to what constitutes “legitimate” fly tackle, I don’t mind telling you that most local guides construct spinner shark leaders the same way that I do.

Remember what I said about cut-offs? To avoid festooning these creatures with unnecessary “jewelry,” we avoid “regulation” tippets in favor of the heavy stuff – that isn’t as damaging in the long run (so-to-speak).

It’s like the shock tippets that are used for giant tarpon, which at one time weren’t permitted by Miami Beach Rod and Reel Club and MET Tournament rules. Admittedly, no one should compare catches made with heavy hawsers to sharks taken on regulation leaders – which, by all rights, should consist of the heaviest possible sections (for abrasion-resistance) knotted to the obligatory 15 inches of class tippet, which in turn, is joined to no more than 12 inches of number-nine single-strand wire. Multiple-strand cable is unacceptable for this work, since spinners will chew right through it.

This brings up a point: While it sounds like overkill, very few fly fishermen can pull hard enough to break a 20-pound tippet. And sometimes, especially if you can prevent a spinner from spinning (more on that later), you can actually land one on light tippet. So it’s not just about extra pulling power.

Mill proved the point during a recent outing, by attaching a piece of wire to one of his tarpon leaders. He landed five or six that day (although a few may have succumbed to the heavy stuff), while we also learned more about the effect of current.

IT PAYS TO EXPERIMENT WITH TECHNIQUES:

That day, sharks surrounded us in record numbers, but they suffered from terminal lock-jaw – despite all our efforts to chum them. That was back in the days before Andy’s trolling motor. They wouldn’t come up for our flies, nor were they willing to chase them. So I drifted mine back on a completely-slack line – just like I was nymph fishing for freshwater trout – and followed the line with my rod tip. Kids on the beach decide not to swim today. Andy gets spinner to boat after several acrobatic performances. Kantner photo.

As soon as it moved, I struck. The same thing happened a second time, when all I could see were shadows. I kept losing fish when they’d spit the hook, but eventually I managed to land one.

So how can you prevent a spinner from spinning?

You can’t actually prevent the jumps, but you can decrease their number and severity of by backing-off on your drag, as well as bowing to a hooked fish. However, you have to do it right away, and be quick to re-apply pressure. In some respects, spinners behave like prize fighters: The harder you push, the more they fight back. If they perceive that their only avenue of escape lies in the great blue yonder, that’s the path they’ll take. Otherwise, they’ll just keep running.

During March or April, expect to hook between 10 and 20 spinners a day. That’s taking into account the time it takes to land them, and the assumption that you find the fish.

GETTING TO THE ACTION:

You can catch spinners just about anywhere. But as far as I’m concerned, Jupiter and Palm Beach represent the epicenter of the fishery. To get there, either fly into Palm Beach or Ft. Lauderdale International Airports (the latter will necessitate a 45 mile ride north on Interstate 95), and stay in one of the region’s many hotels or motels. You’ve come to the heart of sun and fun, and the facilities here are excellent. Bring plenty of sunscreen and liniment.

Steve’s new book, Ultimate Guide to Fishing South Florida on Foot  has more information on spinners, and everything else you can fish for in South Florida. Pick up a copy . . .