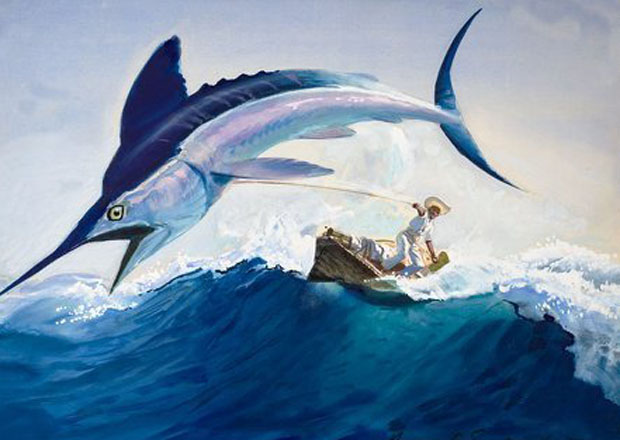 Feature Story: Rediscovering my Old Man and the Sea

Life Travel Traveler’s Tale. Writer Keith Blanchard brought home much more than a fishing trophy from a trip to Mexico with his dad

[dropcap]A[/dropcap]mong the most  beautiful words in the English language are certainly “home” and “family” (“bacon” is a contender, too, in many circles). But to sport fishermen, no words are more beautiful than “Fish on!”—an adrenaline-fueled exclamation they shout across the back of a boat when something has at last found its way to their hooks.

I’ve been deep-sea fishing since I was too small to remember. My dad, my grandfather and I would steam out at least a couple of times each summer from Barnegat, on the Jersey Shore, in my grandfather’s 40-foot fishing boat, “Sea Doll.”

My grandfather was always on the hunt for a trophy sailfish (back when the sea was still thick with such things) and he and my father had fished all the way out on the continental shelf for years, staying overnight and sleeping in shifts so they wouldn’t be run down by freighters. But when I came along, they stayed responsibly closer to shore, hunting striped bass and settling, sometimes, for the much-maligned Atlantic bluefish.

These were all sea monsters to the preteen version of me, with their slack jaws and unblinking eyes, flipping over and over on the deck and skidding and slip-sliding into the hold. I’ll never forget the raw anticipation I felt when our boat slipped free from the dock in the early morning when it was still dark, foam churning behind us to the thrum of the motor as we pushed North America away behind us.

But kids grow up, and life moves on. My grandfather passed away, his boat was sold and over time I kind of lost touch with both my old man and the sea. And so, decades later, right around the time I turned 40, I decided to stop thinking about it and to organize a father-son fishing trip.

The 1958 movie, The Old Man and the Sea (by Ernest Hemingway) starred Spencer Tracy, in a portrayal of Santiago for which he was nominated for a best actor Oscar. Santiago was the desperate old fisherman who must struggle to subdue and then keep the giant marlin that represents his life.

It took my dad about three seconds to say yes. And what would we fish for? Well, the ocean is filled with wonders, but deep-water fishermen all share one bucket-list catch: the marlin, king of the sea.

And so my dad and I, with my good friend Roddy, an experienced marlin hunter, found ourselves motoring out past the chalky crags of Baja California’s Pacific Coast— 3,000 miles and a world away from New Jersey’s Barnegat Bay, on the first day of a three-day fishing trip. Out of the ghostly marina at dawn, and into the cold, dewy air of the Pacific. With a ceremonial first beer a little later, we drank a toast to my grandfather, and Roddy gave us the brief.

A cross between a shark, a unicorn and a freight train, marlins often weigh more than 200 pounds (though some monsters are much heavier) and can swim as fast as a car, leaping majestically out of the water when trying to throw a hook. And they’re Neptune’s own serial killers, eating anything they can smack and stun with that bone-hard bill.

‘I’ll never forget slipping free from the dock, foam churning behind us.’

They’re also smart and worthy opponents that work hard to stay out of your boat, thrashing and slicing at your line with their bills, even fouling your lines by swimming under the hull. Hauling one in can take an hour, sometimes much more, of focused work. Your job is to keep that rod bent, reeling the line when the fish will let you.

A few hours in, we lucked out. “Fish on!” My dad slid into the fighting chair, set the pole and started winding away. At several points I jokingly offered to take a shift, but he just growled and continued his determined struggle, ultimately reeling in a nice one: 160 pounds and almost 7 feet long from the tip of the bill to the fork in its tail.

We took our proof-of-triumph photos and released the fish to help keep the population healthy. Later, we celebrated at a bar, where I became acquainted with the awkward feeling of drinking with one’s father while busty waitresses wearing Pancho Villa-style shot-glass bandoliers trot around pushing drinks.

I was ready to hook my own trophy, but the second day was more like a nature cruise than a fishing expedition. We saw dolphins and sea turtles, and two whales that surfaced together right in front of our boat. Our only “Fish on!” moment came when Roddy hooked a hump-headed, bottle-green mahi-mahi. Back to shore we went, to eat our humble but delicious catch of the day.

Our third and last day broke cold and overcast—good fishing weather. The hours ticked by, with all of us staring hopefully at the end of the rods, but we just couldn’t will that telltale bounce into being. By the time we turned for home, I was at peace with it. A bad day’s fishing is still better than a good day at work…right?

Then, suddenly, just as we were about to pull up the lines: “Fish on!”

I scrambled into the chair and focused hard while my proud dad snapped photos like a maniac.

Keith Blanchard is the author of the e-novel “Johnny Appleseed,” available at Amazon.com.