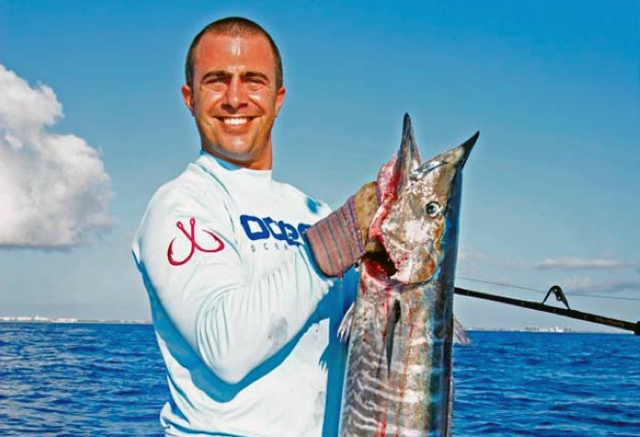 Feature Story: What a wahoo day of fly fishing it was

[dropcap]I[/dropcap]t has taken me eight months to reach a point where I could even think about writing about a hot, flat-calm sea day in August of 2013. I don’t recall the exact date, but I know it was a couple of days after a full moon and there was a very strong outgoing tide.

I’d filled my live-well with live pilchards and when I pulled away from the dock that morning, all alone, I had but one thing on my mind, catching a wahoo.

I won’t divulge my secret numbers for where wahoo seem to congregate at that time of the year, but I will tell you that I was in 110-feet of water off Singer Island, Florida. When I reached my plotted coordinates, I threw out a handful of live chum and hustled to get anchored – aligning my boat with my ‘hoo numbers.

Another handful of chum and the remaining drops of my coffee where tossed into the warm, cobalt blue water. After about 20 minutes, I started seeing bonito (also called albies) break the surface. I knew they where choice on the wahoo menu. I felt a rush of confidence – wahoo wouldn’t be far behind the albies, or more likely, under the school. 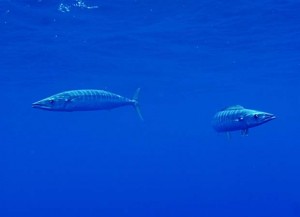 I picked up my favorite 12-weight rod and peeled out about 100-feet of heavy, sinking line and laid the fly on the gunnel so I could pick it up and cast at a moments notice. The fish finder was lit up with small blobs of red – in minutes the blobs got much bigger. I grabbed the rod and made a long, up current cast and then impatiently waited for the line to sink to the 60-foot depth where the largest blobs where showing. Before the line hit the desired depth, I felt a quick hit and a fast run to the surface. An Ablie had grabbed the fly on the way down. I quickly fought and released it – no match for a 12-weight. I threw another handful of live chum – large red blobs again appeared, and no ablies in sight. Another long cast up current and again I waited for the fly to sink. When the fly reached desired depth, which was now just 50-feet, I put the rod under my arm and stripped the fly line as fast as I could using both hands. Nothing. Cast again, nothing. Cast again, more chum, cast again and again. Finally, something hit the fly and ran so fast that I was into my backing before I could get my right finger off the fly line, which had been line-cut and was bleeding like a fountain.

NOTE 1: I was using a 12-weight rod with a matching reel with Scientific Anglers Mastery Series Bluewater Express 600-grain 12-weight full sinking line. I tie 50-pound leader to the fly line which attaches to a 12-inch #4 wire tippet. Leader to wire is secured with an Albright knot. Fly to wire I use a haywire twist. I typically use purple and black fly on a 4/0 stainless steel hooks. The flies I use are the kingfish flies that are 7-inches long  – tied with lead eyes and epoxy.

NOTE 2: I attach a large orange buoy to the anchor line so I can simply untie the rope and throw it in the water and get on and off the anchor very quickly when I hook up a fish. The buoy marks the anchor line for me so when I return all I need to do is retie the line of the cleat and I’m back on anchor. 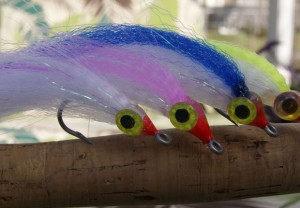 Grant ties these 7- to 8-inches long and they gather no dust as he uses them kings as well.

The line cleared the deck in a matter of seconds and I knew I needed to get the boat off the anchor to chase down the fish as fast as possible. With the line quickly peeling off the reel, I untied the anchor line (with an anchor ball attached) and threw it away from the boat.

Luckily, the fish was headed southeast, which meant that it wouldn’t wrap itself up in the anchor line. I was able to catch-up with the fish – steadily gaining back some of the hundreds of yards of line played out on the initial run.

When I reached the point where my fly line met the Dacron backing, the fish made another blistering run and then turned around and headed straight towards the boat. I reeled like a mad man to keep up with the speed-merchant. I ran the boat away from the fish so I could keep tension on the line – knowing that my fly reel would never be able to keep up with a pissed off wahoo.  When the line got tight, the fish turned and headed east, then west, then went deep. When any pelagic fish heads down to a deeper water column – it gains an advantage. When this happens, you need to position the boat directly over the fish, then slowly work that fish up from the depths. With a fly rod, this can be very challenging as fly rods lack the backbone of traditional tackle. Every inch gained is done very carefully – using as much of the butt and your legs as possible – always avoiding an arching the rod, which produces almost no lifting power.

Meanwhile, the wind had picked up to a steady 15 knots – flat seas were quickly building into 3- and then 4-foot chop.

After a grueling 30 minutes of inch by inch gain in line – I noticed that I’m now in really rough seas. I finally got to see the fish about 20-feet under water. It was a wahoo – the stripes giving its ID away. I was excited beyond belief, but then my line went limp. Did it just spit the hook? No. The #4 wire I used simply broke and I lost the game. I felt my heart sink into my stomach watching  the ‘hoo’ swim away. I mumbled some choice words – it was over.

Looking back, I still wonder if I should have used stronger wire. But, then again, maybe with heavier wire I may not have even gotten a bite. Personally, I’d rather get bites and lose fish than use heavy tackle and get no bites. Is it heartbreaking? It sure is, but that’s fishing. In my disappointment, I felt like I won the lottery and lost all the money at the same time. However, in time I did finally console myself – coming to the belief that I was lucky. It’s not every day that a fly angler gets to go head to head with a wahoo. Too, there’s always tomorrow. 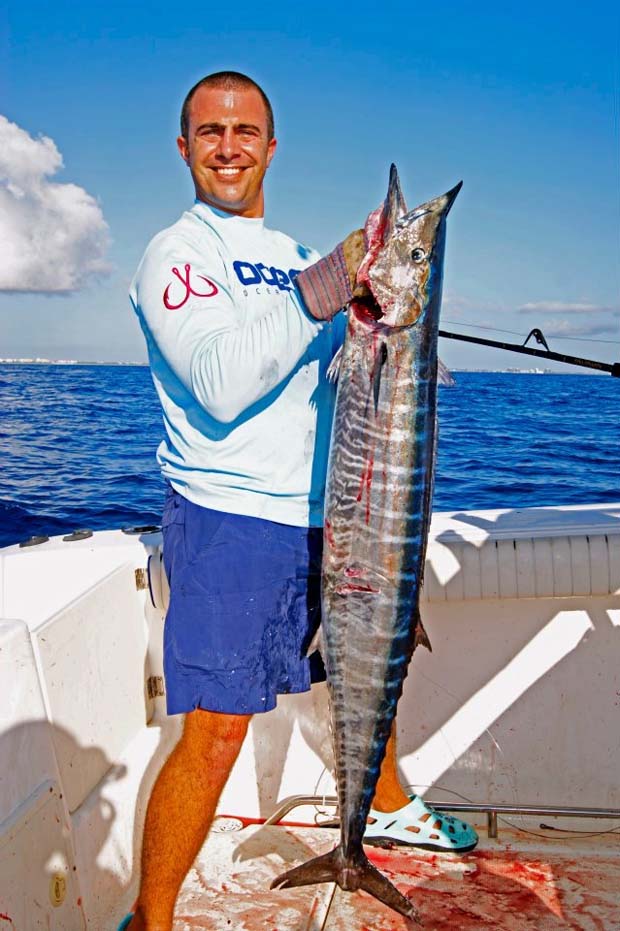 And there was another day. Grant with a nice ‘hoo’. Photo credit Grant Gisondo. You can email Grant – grantgisondo@gmail.com