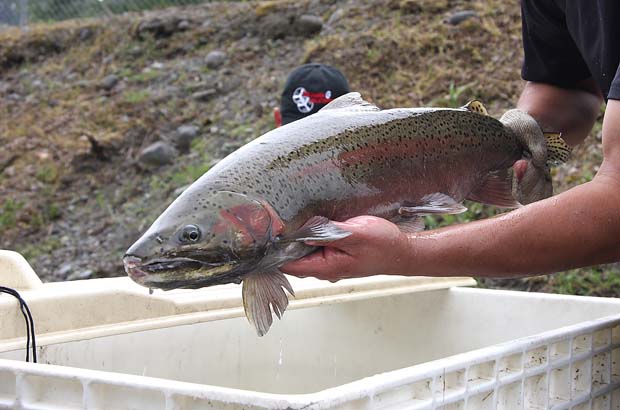 [dropcap]A[/dropcap] panel of federal appellate judges has rejected a wild-fish advocacy group’s request to stop the planting of hatchery-born steelhead in the Elwha River.

The ruling clears the way for Lower Elwha Klallam tribal hatchery managers to proceed with their planned release of as many as 175,000 steelhead — an ocean-going salmonid trout species — from the $16.5 million hatchery built to help restore Elwha River fish runs.

The 9th U.S. Circuit Court of Appeals on Monday dismissed a request from four wild-fish advocates for an emergency injunction to stop the steelhead plantings.

This wild male Elwha steelhead is in great shape and ready to spawn. Photo Seattle Times.

Rob Jones of the National Oceanic and Atmospheric Administration’s National Marine Fisheries Service, which oversees the hatchery’s operations, said hatchery managers will proceed with the spring planting as laid out in the hatchery and genetic management plans, or HGMP, assembled to restore the river’s fish runs after removal of the Elwha and Glines Canyon dams.

“It was our belief that the numbers that are in the HGMPs are what’s necessary,” Jones said.

“That doesn’t mean we have to plant that many fish in the river, but we have the option to do that.”

Wild-fish groups Wild Fish Conservancy, Conservation Angler, Federation of Fly Fishers Steelhead Committee and Wild Steelhead Coalition filed suit in federal court last year to have the plans changed, saying the agencies that assembled the hatchery program did not adequately address the impacts hatchery-bred fish would have on wild species.

Settle did rule that federal agencies must review their plans to see whether the release numbers that call for 175,000 hatchery steelhead and 425,000 hatchery coho could be reduced.

He said the government should confer on a compromise with the conservation groups who had proposed a release of 50,000 of each species.

“We’re disappointed in the appeals court’s decision, but we’re still working our way through Judge Settle’s court on the overall program, so we’ll see where we go now,” said Kurt Beardslee, executive director of Wild Fish Conservancy, based in Duvall.

“That’s what we’re hoping. We still haven’t heard from them on that meeting, though.”

Hatchery managers released 77,000 coho smolt into the Elwha at the end of March.

The Elwha River once produced 400,000 spawning fish, a number that declined to fewer than 3,000 after the Elwha and Glines Canyon dams were built without fish passage structures in the early 20th century.

Jones said the hatchery was developed to ensure survival of the species that use the Elwha to spawn.

“None of us have really had to deal with a situation like the Elwha before,” Jones said. “So we tried to be extremely risk-averse when we put together the HGMPs.”

He noted the fish born in the hatchery are genetically identical to the wild species.

The plans call for adult fish to be captured in the fall to spawn in the hatchery so their smolt can be released in the spring.

One factor that jeopardizes the survival of the fish runs is the heavy loads of sediment that had built up in the riverbed behind the dams.