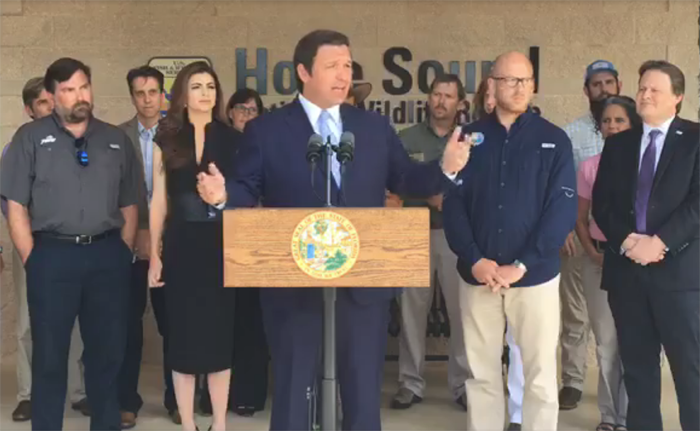 Gov. DeSantis speaking at the Nathaniel P. Reed Hobe Sound National Wildlife Refuge. Reed lived in Hobe Sound and was very active in the Republican Party’s conservation affairs of the State of Florida. He served as Claude Kirk’s Secretary of Interior.  He also served as functioning Interior Secretary under Nixon – ran the office after the appointee Secretary of the Interior proved so totally incompetent he abdicated to Reed with Nixon’s approval.
Reed was responsible for turning Nixon and the Republicans into productive conservationists by establishing the Environmental Protection Agency (EPA). An independent agency of the United States federal government for environmental protection, and created the Clean Air Act, which is now being trampled by the Trump Administration. — Skip Clement. Image is a screenshot – FL Gov’s office video.

The focus of this task force is to support key funding and restoration initiatives and make recommendations to expedite nutrient reductions in Lake Okeechobee and downstream estuaries.” — Gov. Ron DeSantis

The team consists of: