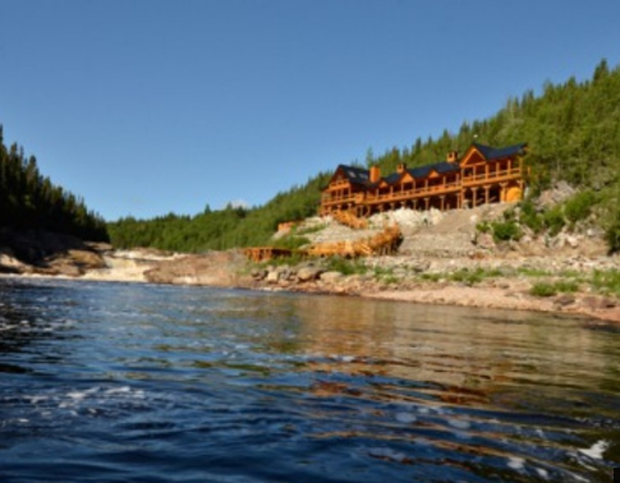 This story, written by Monte Burke, appears in the September 23, 2013 issue of Forbes.

[dropcap]T[/dropcap]he best Atlantic salmon fishing outfit in Labrador–and just possibly in all of North America–was born in the gloaming of Sept. 16, 1993, when two mineral prospectors made the discovery of a lifetime. Chris Verbiski, then 25, a college dropout from Newfoundland with an obsession for rocks, had teamed up with a man named Albert Chislett, then 45, to scour the wild, windswept crags of Labrador for diamonds on behalf of a small mining company. It had been a rough summer. The two men were sun-blistered and swollen with bug bites. They’d burned through their advance money and were nearly broke. Worse: Only a few weeks remained before the weather shut down prospecting in this harsh, beautiful region on the northeast coast of Canada.

St. Lewis River Lodge. The view upstream of the St. Lewis River lodge. With no roads nearby, some 10 million pounds of material was helicoptered in to build the lodge right into the riverside rock face. Chris Verbiski photo.

On that early evening, as they headed back to camp in the Inuit community of Nain, they spotted something from their helicopter: a thick stripe of rust-colored rock on a hill above Voisey’s Bay. They hovered over it. Verbiski marked the spot on his survey map. But they were low on fuel and couldn’t descend. It seemed promising–perhaps the indicator of a surge of metals that had been pushed to the earth’s surface a billion years ago. After the fruitless summer that hope was all they had.

They returned to the spot, and their samples indicated that it was indeed rich in nickel and copper. They rushed back to civilization, emptied out what was left in their bank accounts, maxed out their credit cards and, with a paranoiac’s stealth, quickly purchased 288 claims, staking a perimeter around the hill. After all their searching, there were no diamonds. But Verbiski’s initial reaction to what they did find was a simple, understated “Holy [expletive].”

Two decades later Verbiski and I are on an Atlantic salmon pool in the St. Lewis River, deep in the heart of Labrador, a long helicopter ride from anything like civilization. Atlantic salmon–notorious for their reluctance to take an offered fly–are known, with some fondness, as “the fish of 1,000 casts.” In order to catch one you must battle the impulses of our immediate-result, attention-fragmented digital age. You can tell a lot about a person by watching how they fish for salmon.

Verbiski, a trim man with pitch-black hair and mustache, is relentless in the extreme. His routine is to find one good fish and work it until either he or the fish succumbs. He once cast to a single salmon for nine straight hours, pausing only to change flies and sip water. He eventually reeled in the 23-pound term project.

It was precisely that sort of stamina and persistence, of course, that led to the discovery of the Voisey’s Bay Mine, the richest (in terms of grade) nickel-and-copper mine in the world, yielding 130 million pounds of nickel and 107 million pounds of copper annually. Back in 1994 Verbiski and Chislett negotiated a 3% royalty on the mine’s output from the owner (then Diamond Fields and now Vale VALE +0.58%) that’s kicked out as much as $36 million a year since the early 2000s. Chislett cashed out in 2005. Verbiski sold to Royal Gold RGLD +1.41% in 2010 and is now a shareholder.

Verbiski founded a company that runs a mineral exploration outfit and invests in mining companies. Then he began to pursue his other passion–fishing–in earnest. In 2011 he purchased the revered fly-fishing tackle company Loop. And this year he opened up two Atlantic salmon fishing lodges–one on the St. Lewis River in southern Labrador and another on the Hunt River 400 miles north. The cost for a week of fishing ranges from $10,000 to $21,000.

Verbiski had been dreaming about lodges like these since his prospecting days, when he and Chislett would fly over remote, pristine rivers. Occasionally they would take a break to stop and fish, landing their helicopter by promising pools. Sometimes, when the funds were running low, they had to stop and fish in order to eat. “It’s amazing how being hungry makes you a better fisherman,” says Verbiski.

Labrador has always been one of the top Atlantic salmon destinations in the world. What it lacked was world-class fishing lodges to match. It now has two.

My trip to Verbiski’s corner of salmon paradise had been arranged by Bob “Bubba” Rich, the chairman of Rich Products and a member of The Forbes 400, and his wife, Mindy, a fun-loving woman who had once purchased a British lordship for Bubba from a broker. Also along for the ride: Florida Keys Outfitters tackle shop owners Sandy and Sue Moret; the artist John Swan; and the novelist Charles Gaines.