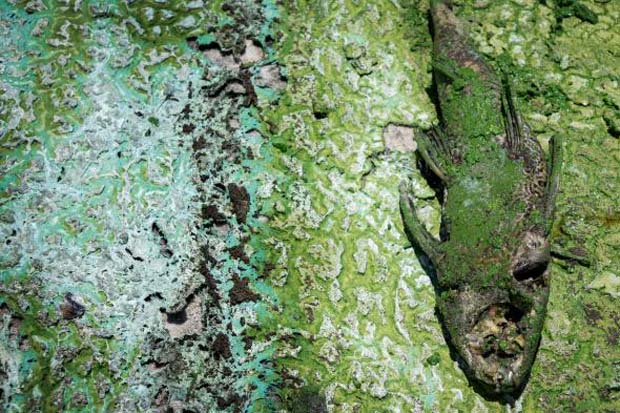 The guacamole-thick algae that fouled both coasts earlier in July will likely be a regular occurrence for the Sunshine State. Here’s why

[dropcap]T[/dropcap]he green slime that washed onto Florida beaches earlier this month marks the eighth time since 2004 that toxic algae have fouled the Sunshine State’s storied coastline.

The algae blooms of 2013 were so severe the event became known as Toxic Summer. And this year’s outbreak has so thoroughly spread through delicate estuaries on both coasts that Florida officials declared a state of emergency in four counties. Toxic sludge has killed fish, shellfish, and at least one manatee and has sickened people who have touched it.

“This is absolutely the worst,” says Evan Miller, an environmental activist and founder of Citizens for Clean Water. Miller lives in the tourist town of Stuart, 110 miles (177 kilometers) north of Miami. “We’ve never seen algae so thick. You can see it from space. There are places in Stuart that are on their third and fourth cycle of blooms now.”

As the latest outbreak continues to play out with sporadic bursts of new algae blooms, dismayed Floridians are wondering if the recurring appearance of this tourist-repelling, fish-killing scum is their new normal. Dead alligators, manatees, and millions of fish line the banks of the St. Lucie and Caloosahatchee rivers. Both serving as a toilet flush for Lake Okeechobee waste. The toxic soup provided by Lake Okeechobee is the fermentation of Big Agri and Big Sugar approved waste. South Florida Water Management is a bit lax and unknowing as is Gov. Rick Scott. Photograph by Cristobal Herrera, EPA.

As the climate warms, toxic algae blooms are proliferating worldwide—from eastern China, which has seen some of the largest algae blooms on Earth, to the American West, where sludge covering almost the entire surface of Lake Utah is raising questions about the safety of fruits and vegetables irrigated with algae-infested water.

Florida, already confronting warmer and wetter days, will surely find itself battling more algae as the climate continues to heat up in the decades to come. But the guacamole-thick sludge that keeps appearing can be blamed more on political inaction.

The state’s current algae problem is rooted in its historic penchant for dredging and filling, which started when its founders began draining the swamp a century ago to create dry, marketable real estate.

Solving the problem is stymied by legislative bickering and warring factions that drive modern Florida’s economy and politics. Few expect environmental restorationists, Big Agriculture, and the residential housing industry to get together and agree to a fix.

“There is no single villain in this nightmare, and not one single thing you can do to make it all better,” says Maggy Hurchalla, a former five-term commissioner from Martin County and the sister of Janet Reno, who served as U.S. Attorney General in the Clinton Administration.