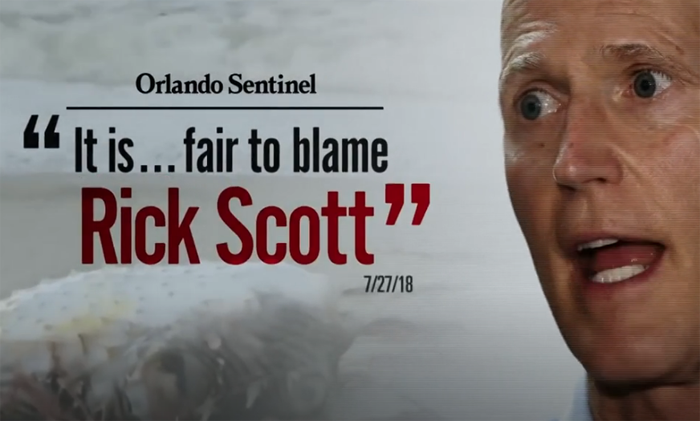 The shape of things to come in U.S. politics could be decided, in no small part, by foul-smelling, fish-killing slime

[dropcap]F[/dropcap]lorida is in the grips of an algae crisis of epic proportions. Pollution and water management issues have triggered bloom after bloom of blue-green algae on the ginormous Lake Okeechobee, the beating heart of the state’s water system. When water is released from the lake via drainage canals, the stinky, slimy gunk creeps into rivers and estuaries, mucking up coastlines and sickening residents.

Meanwhile, a separate algae outbreak—starring the saltwater-loving Karenia brevis—has laid siege to Florida’s southwest coast, killing tens of thousands of fish as well as manatees, sea turtles, and dolphins. The so-called red tide bloom currently spans some 135 miles of coastline, and it shows no signs of stopping.

Both blue-green algae and red tide are naturally-occurring organisms. But, as Earther learned when we traveled to Florida to speak with experts and see the blooms for ourselves, today’s algae crisis has human fingerprints all over it. It’s deeply intertwined with development, agriculture, and politics. Solving it will ultimately require a vast overhaul of how Florida moves and uses water—and a concession that the decision to tame and drain America’s largest swamp nearly a century ago carried some unintended consequences. Everybody knows that ALL the water entering Lake Okeechobee has to be cleaned up, and the water from it needs to travel south, its historic route, into the Everglades to be cleansed. However, Big Sugar, on life support with welfare stamps and coddled agricultural powerhouses own the grifters, like Florida’s Governor Scott and the “hands-out” good ‘ole boys in Tallahassee who do take the money and run will never do the next right thing. Image screenshot.

If one thing’s certain, it’s that Floridians are sick of algae, and its death-like stench will be fresh in folks’ memories as they head to the polls in November. Republican Governor Rick Scott is leaving his post to make a run at Democratic Senator Bill Nelson’s seat, and whoever wins could well decide the majority in the Senate. Both have blamed the other’s policies for the algae crisis.

Will a bunch of opportunistic microbes have an outsized voice this election season? Stranger things have happened in recent memory.