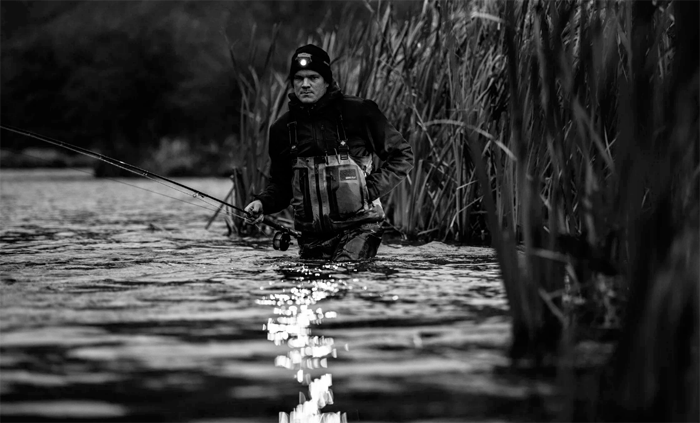 To take “hard day” out of “It’s been a hard day’s night”; go fly fishing at night with a friend

[dropcap]F[/dropcap]amilies of tubers and swimming hole boys and girls along with armies of canoe and kayak paddlers keep trouts, basses, stripers, and panfish hunkered down until the last inflatable has ferried the last of humankind off navigable rivers in any of hundreds of tailwater rivers in the Southeast every day of every summer.

Trying to beat those archetypes at their grip on the rivers and squeeze some alone fly fishing hours can only happen on cold, rainy summer days that keeps the folks at home, or getting up early and beating them to the water and countering with staying on the water after all the happy frolickers have called it a day.

When you have learned it’s best to fish these waters at night, you keep it to yourself

You learn never fish at night if its a tailwater fishery unless you’re a veteran of many engagements and know the river better than you know the proverbial back of your hand. You must understand Army Corps of Engineers [COE] dam releases, a tailwater anomaly that raises the level of a river from X-feet to X plus 2-feet [example] and the new crest of water arrives like a wall with 2-feet behind it all the way to the dam it came from – a tsunami that can broadside you into the obituary column. Also, any nightimer must know what any water level creates on the surface, or hides just below it. Where are the rocks, shoals, sunken trees, and where are the best spots to hold up, anchor and fish and you do not need a dam release to call it danger?

The only differences are mosquitoes, snakes, darkness, the need for having a lamp on your person or your vessel, and the most significant difference – you’re going to catch a lot more fish than you ever expected on the river you know so well… or thought you did.

Recently, a Georgia river not known for anything but beer idiots and trash has been yielding so well at night [it’s rarely fished] I am under surveillance and being held accountable to my fly angling friends, with whom the nighttime discovery was made, to seal my lips. If I reveal this rich gold vein of trout, I will suffer the retribution from the Roman goddess Petulantia.

Returning to land-lubber fly fishing from 25 years in South Florida, I was taken aback by the seeming newness of nighttime fishing in Georgia, or the Georgia I’ve been introduced to because night fishing inshore and offshore is so prevalent in South Florida – whether swordfish, tarpon, or snook ‘the night is where it’s at.’

In Key West, Florida, find a commercial shrimper with his lights on at 3 am and hold onto your hat it can be gangbusters for as long as your body can hold up to catching and releasing, and there are shrimp around to catch.

Almost all gentlemanly fly fishing civility is suspended during these free for alls; no IGFA rigging, 12-weights, 5-foot straight line 30-pound leaders with Albright’s and Haywire Twists, big ass whiteflies on 8/0 hooks, and stay back 25-yards from the boils or suffer the consequences of chewed through-line. I never last more than 15-minutes – exhaustion.

When it’s over, we provide cold beer for the shrimpers and the shrimpers shrimp for us. Everyone enjoys witnessing and distraction. It’s a good night of fly fishing no matter what.

Tarpon fly fishing in the Keys is ritualistically a nighttime thing anyway, like the Palolo worms hatch. The why it happens is well understood, but the cooperation of things weather not so reliable.

That reliability would be the Palolo Worm hatches emanate from coral rock and sponges that cover the benthic floor of the Atlantic Ocean side of the Florida Keys. These worms reddish and white and look like earthworms with a genetic disorder. Their life demand sends them racing for the surface in unison that is as thick as cinder blocks. It’s predictable – same time, launch pads, same road map, and same reef every year. The tarpon gauntlet creates the same craziness every year.

Viagra? The worms seem to have an intoxicating effect on tarpon 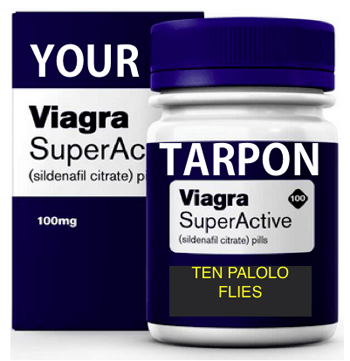 It’s all the rage now in the Florida Keys during tarpon season. Unlike Viagra for human consumption that can take up to a half-hour to be successful, the Viagra Palolo Flies have been known to get a hard-won tarpon in just minutes.

The Atlantic Megalops atlanticus begins to do uncharacteristic things. The worm is believed to be an aphrodisiac and the catalyst for the kick-off of the breeding season. The few that catch the worm hatch perfectly can see tarpon moving aggressively with large numbers rolling as far as the eye could see.

Late May or early June is tarpon time in the Florida Keys. It’s the season when sizeable migrating fish from the South pause in anticipation of the palolo worm hatch.

There’s not one hatch in one pass; there are several hatches in several passes

The hatch usually occurs around the lowest tide of the full moon in May or June. A late outgoing tide in conjunction with the full moon is the ideal time to be on the water. That, of course, depends on when the moon is full.

There are never any guarantees. Ambient air temperature, water temperature, and humidity levels all play a part in the initiation and timing of the Palolo Worm hatch.”

Taking night seriously: Color and night vision in the oceans

The question of what color fly to use is a subject of considerable debate and controversy among fly fishers. According to David A. Ross, Ph.D. who wrote the scientific but readable book, The Fisherman’s Ocean, the color red quickly disappears and becomes gray, and then black, within 10- to 20-feet —yet the color may provide good contrast in low­-­light conditions, and many anglers have success using red flies after dark. Most baitfish have some silver in their body, so your fly probably should, too. White is the right color for flies used in deep water. Dark colors, especially blacks, grays, and purples, generally work well at night, since they produce a better silhouette than brighter flies. In general, the more golden the day, the lighter your fly should be; a dark fly may stand out too much on a very bright day. Yellow often is an effective color to use in turbid water. Many anglers favor using green in their flies because green will hold its color through most fishable depths.

It’s a good idea to use a larger fly when the water is rough since rough water reduces visibility. Further, a surface or near­-­surface fly usually presents good contrast against the ocean’s surface. Many of these flies have darkened undersides to increase their contrast. Most fish and baitfish, however, have a light or silver belly, which reduces their contrast and makes them less visible. For this reason, some fly­-­tiers prefer to imitate the real thing rather than increase contrast. There probably are advantages to both approaches.

Finally, flies with flashy materials or surfaces may be good attractors, but the flash, or too much of it, could also be threatening to the fish you are trying to attract.

The fact that fish lack color vision at night may seem contradictory to your own fishing experiences, during which you found that colored lures were more successful after dark. You were not necessarily mistaken. Although fish may only see black and white at night, contrast is still fundamental. An excellent nighttime fly, it stands to reason, should contrast with the night sky. It’s often best to use a dark fly on a dark night, and a light­-­colored pattern when the moon is bright. The reason is that a dark fly is less transparent and thus creates a better silhouette against a dark sky.

Some colors, primarily black and frequently red, work well on dark nights. (Noise­-­making flies or ones that push water, are also effective at night.) Contrast is important during the day, too, at which time it might be best to use a light­-­colored fly, as a dark pattern could produce too much contrast. Furthermore, one way of capitalizing on the fact that some fish can see polarized light is to use flies that reflect light. A reflective fly might work better at night, too—it’s worth a try. 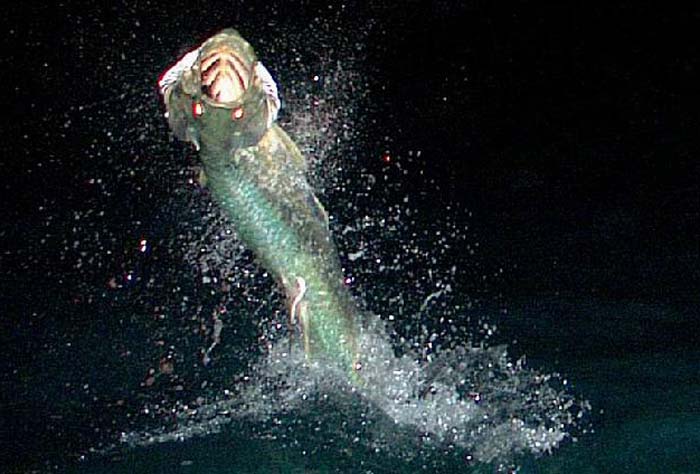 At night, the flash of bright light on the water—fireworks, a passing car, or even lightning—can harm fish, since their eyes are adjusted to night conditions. Bright light can disorient or panic fish. After a flash of light, fish may have to spend time readjusting to the usual dark conditions, and during this interval, their night vision will be reduced, and they probably will not feed.

Artificial light left on for extended periods, such as a light on a pier, often attracts bait­-­ and game fish—stripers, snook, and tarpon, for example. In this situation, the fish will have adjusted to the continu­ously shining light. Many fish ambush baits by hiding in the shaded water – their prey is easily detectable when in the lighted area. If a fish is hiding in the shade, it usually will be facing toward the light.

Night fishing freshwater in the heartland of the Mid-Atlantic region with Domenick Swentosky of Bellefonte, Pennsylvania, is enlightening for those on foot

The darkness Swentosky says is all about light. His observation is kind of like the glass is half full or half empty. How dark is it depends on moon phases, tree leaf cover, the glow from a nearby city and highway lights. Fish react to these light effects and use them to aid in sourcing prey, along with smell and lateral line signals without the fear of overhead predation, a daytime reality we rarely capture unless you’ve been out west, Alaska, Russia or South America where birds of prey are almost always in view during any out of doors day.

Swentosky’s experience being afoot and fishing waters he’s familiar with is spot on. The big brown that hunkers down in the X pool may be cruising 8-feet from the bank in 2-feet of slow current at some point at night; that big ugly fly that has done nothing but alarm pool after pool of full trouts may be “irresistible” at 3 am; casting that red, misshapen crayfish fly your brother in law gave you two Christmas’ ago is a winner fished deep in any pool at 4 am.

Troutbitten‘ s Domenick says you need to be a veteran angler to fly fish at night because you don’t know anything and only your understanding that will put you on a fast track.