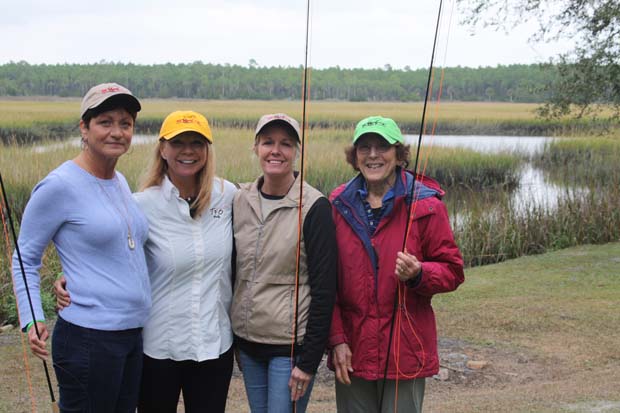 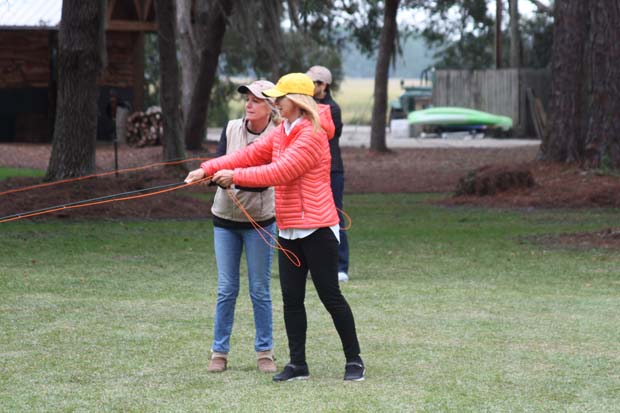 Wanda Taylor demonstrates for Leslie Weed, The Natural, the basics of the single haul which she soon mastered. There wasn’t any casting technique that Weed couldn’t get in a record breaking-short amount of time. By days end, Leslie got dubbed “The Natural.”

[dropcap]F[/dropcap]ly casting is a life-long trip that requires reckoning with just that. Over the years most of us have been involved with a fly fishing school and especially fly fishing shows where we witness casting pool demonstrations by local or nationally recognized gurus of the art. Too, we’ve been preached-to that there’s basically only one true casting method. However, the preachers not always in agreement on the one true methodology.

Which casting religion do you belong to?

Using Mahler’s approach, the index finger points in-line with grip and rod; back cast starts with rod tip at water and the flyline lift is a slow haul, directly overhead (literally) and behind – staying on a high backcast plane and making the familiar backcast loop.

It’s detractors claim there is a big sacrifice in distance, which I don’t find to be a real detraction or sacrifice. Most, however, agree that using the index finger does improve accuracy. Wanda Taylor adhere’s to the accuracy claim. Mahler’s method also is very adaptive to left and right hook casts, which always seem to come into play. 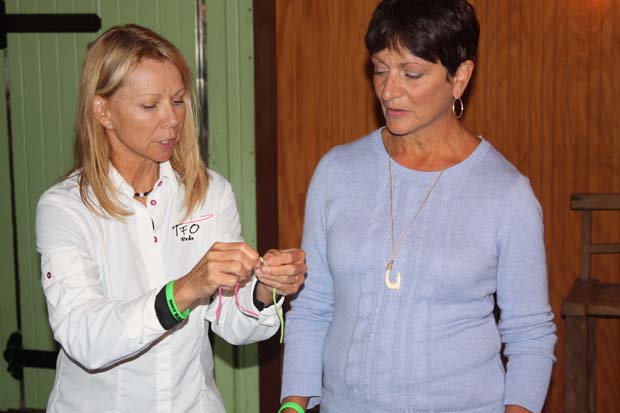 Wanda goes over with Dee Pizzoferrato, a crochet expert, the Perfection loop. Not a cinch to master, but with Dee’s finger dexterity it wasn’t long until she got it.

Just who is the Decider?

Many have been to countless shows with casting demonstrations by Lefty, Steve Rajeff, Diana Rudolf, Andy Mill, Lee Wulff, Joe Mahler, Joan Wulff, Mel Krieger, Lori Ann Murphy, Steve Huff, Sandy Moret, and Jerry Siem. Some of us have been coached by famous guides from Iceland to New Zealand and Argentina to the Arctic, and if you you’ve been lucky, those most talented Bahamian bonefish guides. All of whom sing the do this way song, but is each new twist to an old song worth the price of adherence?

Recently, November 7-8, 2014, I invited myself to my friend Don Reed’s (Saltwater Fly Tyers) casting and fly fishing clinic featuring Wanda Taylor. The event was held at The Fish Camp (not an official name) in North Florida – just south of St. Augustine. It has a unique coordinate that provides stunning views of the salt marsh, pristine grass flats, inter-coastal and serpentine creeks that feed flats that hold trophy size reds in good numbers. The property is five or so acres with a dock jutting into the grass flats.

Today, the property has been fixed up to lodge like standards. It has served only as a family and friends weekend getaway, but will soon be open to approved, small, conservation minded groups. The redfish fishing is world class with 30-pounders that don’t create hoopla from regulars at the camp when caught and released. 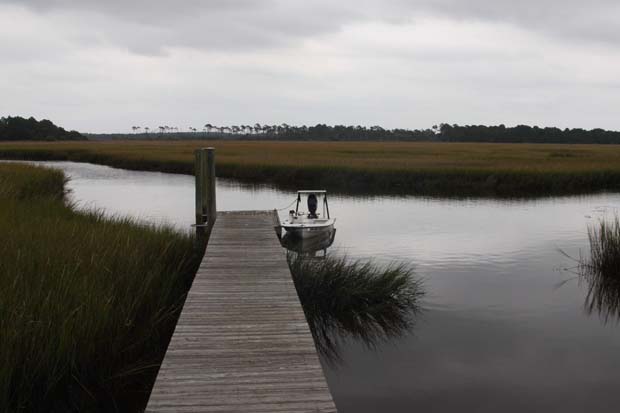 The Weed’s Fish Camp dock and some fishy-looking marsh water. In the distance is the Intracoastal Waterway – roughly marker 26. Boat traffic heading south all day.

The Fish Camp and the ladies

The event was the first ever held at The Fish Camp and it was a ladies only affair. Remarkably, not one of the attending mom students owned a fly rod or ever cast a fly, but all had husbands, sons, daughters or friends that had been involved in fly fishing for decades.

Three of them had unique stories about getting in the game:

Dee is a mom, and a first generation of Portuguese descent from New Bedford, MA,  has three sons and a husband that fly fish. She and her husband just retired, moved from Connecticut to Palm Coast and bought a flats boat. Dee wants to fly fish and be with her husband whom she says will be out everyday that’s nice, which she says is most. Dee said: “He’ll be fishing a lot so I’m going to join in. My husband is all for it.”

Leslie, a can-do mom that probably could straighten out the House of Representatives, is a natural with her golf skills providing both strength and performance capabilities. Before the clock struck 10 am she was onto it and casting better than a lot of folks I know by days end. The double haul, a non-intuitive casting action, was picked up by her faster than anyone I’ve ever seen.

NOTE: See Leslie and her husband’s information about their charity, Healing Every Autistic Life organization below. This they are passionate about.

Claudette, a mom, saw life in cycles of 15 years. Each, to her way of thinking, ushering in the need for mastering a new endeavor. Her newly adopted is fly fishing. She’s one of those folks that we all bump into sometimes; determined with a confidence not normally possessed. She drifted into her new 15 year cycle of fly fishing because she and her husband bought a home in western North Carolina and all her guests, including Don Reed, as well her neighbors all fly fish. “Watching them,” she said, “and enjoying the beauty where it all takes place, as well as the grace of it possessed me.” 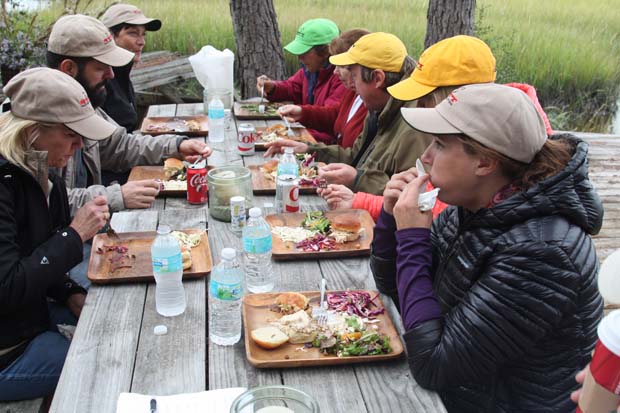 It wasn’t all work and no play. Don Reed ordered a gourmet fixins’ for lunch. Rachel Austin (foreground right) prepared everything and Tom Kiernan (middle left) was sous chef. I pretended to help, but just nibble-tasted everything until Rachel ran me off.

Can you remember how you dealt with being introduced to a fly fishing, assembling a four piece rod, locking a fly reel into place, putting on the correct yards of backing, choosing and winding on fly line, using different knots, making a leader, and tying on the right fly fly? And the casting part. I can’t remember that far back, can you?

Wanda took the ladies through those introduction steps as if she had access to Doctor Brown’s plutonium-powered DeLorean time machine. She’s a teaching natural, plus she’s not a word waster. The ladies, always better listeners than men, picked up those assembly steps in one run through. 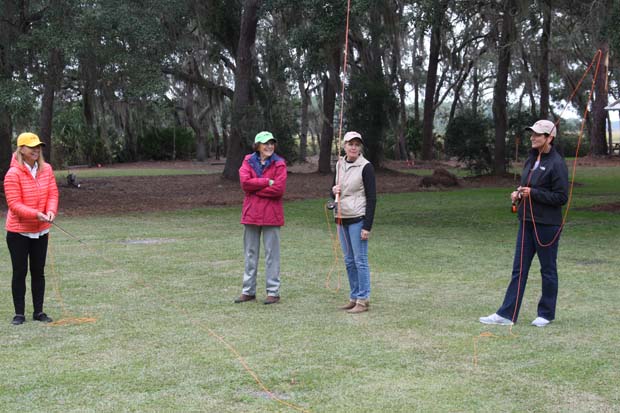 Wanda teaches enjoy and relax, saying: “There are several ways to successfully cast a fly. And in the real world of actually fly fishing multiple techniques have to be known, understood and applied to be successful. To suggest that it’s all overhand with an occasional roll cast thrown in is not correct.”

She started the ladies with The Office, a short low weight and specially constructed reel-less fly rod by TFO with a length of yarn attached – serving as the flyline. Taylor proceeded to have the gals tuck that rod butt under a wrist locking bracelet (also a TFO product). Wanda specifies that there’s no wrist action and that you don’t engage the shoulder. She had the students initiate the back and forward casts (using pre-rigged medium-flex 6-weight TFO rods) by having them do it paralleling the ground. The amount of line out (line was fingered) varied with each student. Remarkably, the catch-on rate, doing it that way, was 100%. The students got the feel of rod bend, line weight and were able to see both back and forward cast unfurl. Wanda deftly coaching each individual.

She used the following steps of instruction which cleverly tricked the students into incorporating the haul without creating the tenseness associated with telling students they were now going to learn a new technique. It worked like a charm. The haul is not an intuitive motion, but once learned, it is easy. The feel of the rod bending and line weight eventually gains credence with the angler.

Taylor’s teaching progression is a good preflight checklist for beginners: 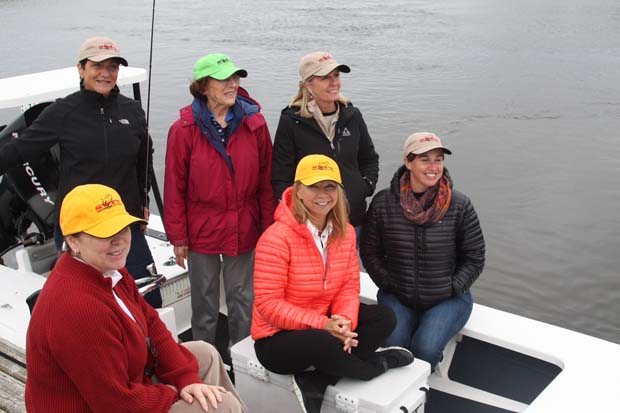 The gangs all here.

Autism is a rising menace in our children – find out more at HEAL  . . .