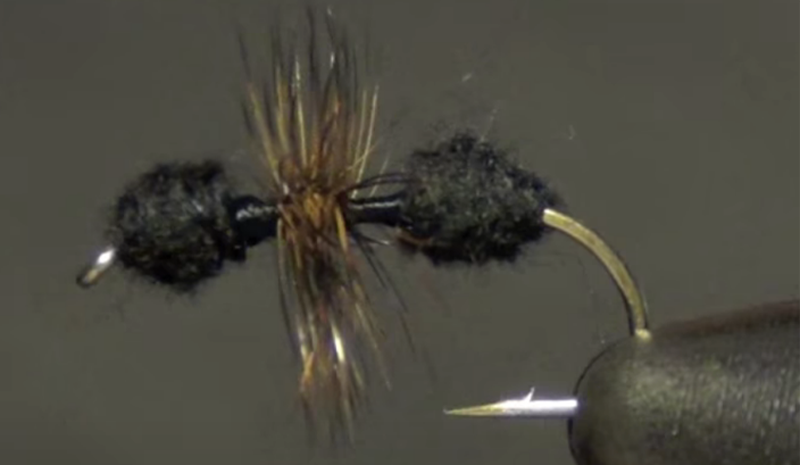 Ruben Martin’s grasshopper – looks complicated but it’s not. You probably won’t have all the materials on hand, but not hard to find online. Great confidence builder to tie this and killer trout fly on a hot August [sunny] morning where you scouted hoppers.

In late summer, the most productive time for terrestrials is the greener pastures, which means freshwater: rivers, streams, creeks, brooks, rivulets, ponds, and lakes

It’s that time of the year for terrestrials, or is it? Let’s call it spring and summer for terrestrials and remember these landlubbers show up in the water where you live because sun-drenched sometimes corresponds with parched terra firma. The latter condition drives the bugs to greener pastures, and that’s more lush greenery found nearest water and fulfilling species perpetuation.

That all begs for an answer why so many terrestrials end up in the water, and why do trouts respond so well to them? Here’s how I got schooled a decade ago:

They end up in the water when you’re fly fishing the tricky Sun Valley/ Ketchum Spring Creek  made famous for skiing, sex, and fly fishing along with the Hollywood types who head there for skiing in the winter, fly fishing in the summer and sex year-round.

In the summer, the waters are mostly gin clear because of the absence of rain in eastern Idaho’s high desert. I made my way downstream in waist-high at waters-edge when I lost my balance and grabbed a sapling to save from going swimming underwater and downstream. I shook loose a half-dozen ants and “bugs” that landed on my hat, shoulders, and fly rod butt. When I whisked them off, they drifted a few feet and then got slurped by trouts. Yeah, a few feet away, stumbling on a rock, sinking in mud, and splashing 230-pounds to steady and upright while bending a small tree from vertical to 180°.  So much for stealth.

Common carpenter and – tied by Intheriffle. A screen shot.

There is no other list of types of flies to tie as easy as terrestrials, and only a few can induce trouts to start crashing the surface. I say that safely now that foam is so much a part of terrestrial tying.

So, is a collection of terrestrial flies rare for a good fly fisher?

Yes, pretty much when compared to most fly fishers’ fly boxes I’ve seen, although in the last dozen years their favor has stepped up noticeably. “Dapping” a grasshopper in August, or whenever you see them in abundance, ain’t no fools play – ask any Tenkara angler [they’ve been on terrestrials since Daniel Gihardo introduced that type of fly fishing decades ago]. Thom Glace, one of the best fish illustrators in the country and award-winning watercolorists, is a dedicated Tenkara fly fisher and says a trout taking a fat ant is hard to beat for fun.

How to play with ants

Like worms, ants are in play almost year-round or whenever it’s warm enough at night to keep them thermally ready to stay busy. Every bird, lizard or frog, trout, or “guppy” will go for a ‘Quarter Pounder’ ant.

Ants are a diverse lot, and hook sizes #20 to #14 are the most in my collection. What repeatedly gets my attention is that ants are fun no matter where I am, and my Tenkara friend swears by them in the spring creeks and small Pennsylvania streams to Colorado and Idaho.

Entomologically, the body temperature of ants, change in response to the atmospheric temperature. In winter, their body temperature falls so significantly that their movements inevitably forces them to hibernate, which they do fitfully. Their favorite hangouts are warm places, such as the soil or under the bark of trees.

Most species of ants eat a large amount of food in autumn to put on fat, thereby allowing them to go without food through the winter. In the winter, ant nest entrances close up due to the cessation of traffic. When spring comes, and it gets warm enough, the ants become active and open up their nest’s entrance up. — Partial excerpt Outdoor Life

“Grasshoppers have led the terrestrial uprising, with an ever-expanding profusion of great flies. One reason for this has been the increasingly innovative use of closed-cell foam and other synthetic materials. NASA originally developed the closed-cell foam in the 1960s as a possible way to help absorb g-forces in the Apollo spacecraft. It proved too delicate for that task, but it gradually took off in the 1970s as a flexible and buoyant fly-tying material.” — Excerpt Outdoor Life 2014

Others worthy of tying are crickets and beetles, but I found it hard to beat any ant or hopper – check your local fly shop. They’ll know what kind of terrestrials are willing in your fishery.