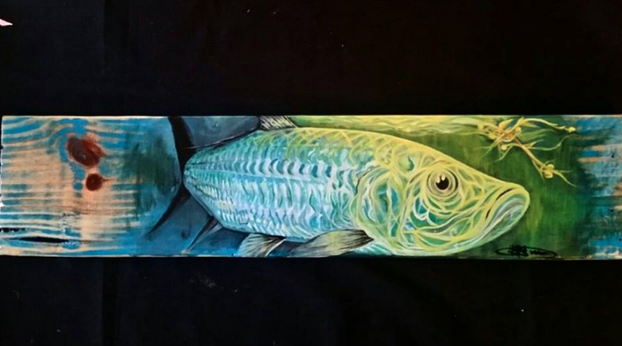 [dropcap]B[/dropcap]ernard Barrios’ eclectic style clearly includes street art overtones and a masterful understanding of underwater light. He has a no holds barred approach to every medium he attempts. Here we present an array of Bernard’s work from the last few years. Be sure to follow him on Facebook where you can occasionally watch his paintings unfold as he creates them.

On the Radar by Bernard Barrios.

Much of his new work is inspired by the great fishing and landscape around him in South Florida. Barrios lives in Miami where he specializes in freelance art, mural design and fine art. His broad array of styles include contemporary, illustration, and marine life. As some of his work indicates, he is inclined to draw fish that do not exist in real life as well as those that reside in the waters around him.

When he is not painting, Bernard is generally out fishing the prime fresh and salt waters of South Florida. It is during these times that he captures ideas of the beauty that exists under water, one piece at a time. Barrios is a big supporter of the Bonefish and Tarpon Trust and can be found at many of their fundraisers and events. The artist and his muse…