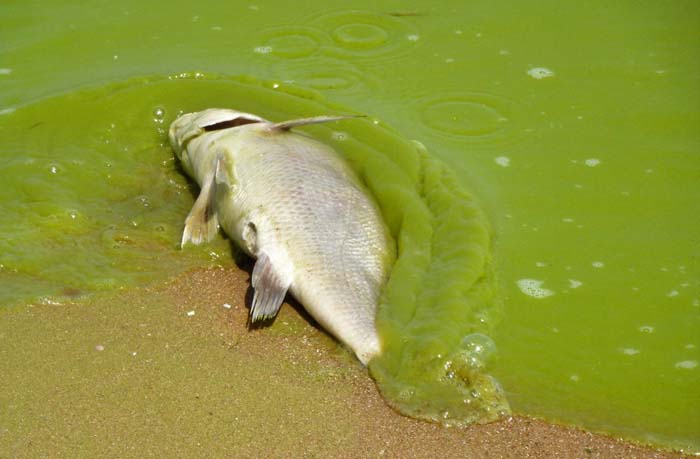 A dead fish surrounded by algae in Lake Erie during a record-setting algae bloom in 2011. Tom Archer / NOAA

Investors are hoping their brush with infamy can become a daily occurrence now that they are combined as one giant chemical leviathan.

Unique about the Bayer-Monsanto marriage is the number of lawyers and lobbyists they need to keep on the payroll in order to reduce restitution for their causal or participatory environmental disasters.

Their current misjudgement hasn’t killed any people yet, just sickened them and only killed thousands of recreational fish in Lake Erie. Lake Erie is one of Great Lakes which we share with our neighbor, Canada, who has not yet put up a wall to keep us out.

By Lorraine Chow for EcoWatch [dropcap]G[/dropcap]lyphosate, the controversial main ingredient in Monsanto’s Roundup and other herbicides, is being connected to Lake Erie’s troubling algae blooms, which has fouled drinking water and suffocated and killed marine life in recent years.

Phosphorus—attributed to farm runoff carried by the Maumee River—has long been identified as a leading culprit feeding the excessive blooms in the western Lake Erie basin. Now, according to a new study from chemistry professor Christopher Spiese, a significant correlation has been established between the increased use of glyphosate to the percentage of dissolved reactive phosphorus (DRP) in the runoff.

As No-Till Farmer observed from the study, DRP loads in Lake Erie increased in the mid-1990s at the same time that farmers began the widespread cultivation of crops genetically engineered to withstand multiple applications of Roundup.

“For every acre of Roundup Ready soybeans and corn that you plant, it works out to be about one-third of a pound of P [phosphorus] coming down the Maumee,” Spiese told the agricultural publication.

Here’s how the team came to the conclusion, as No-Till Farmer reported: