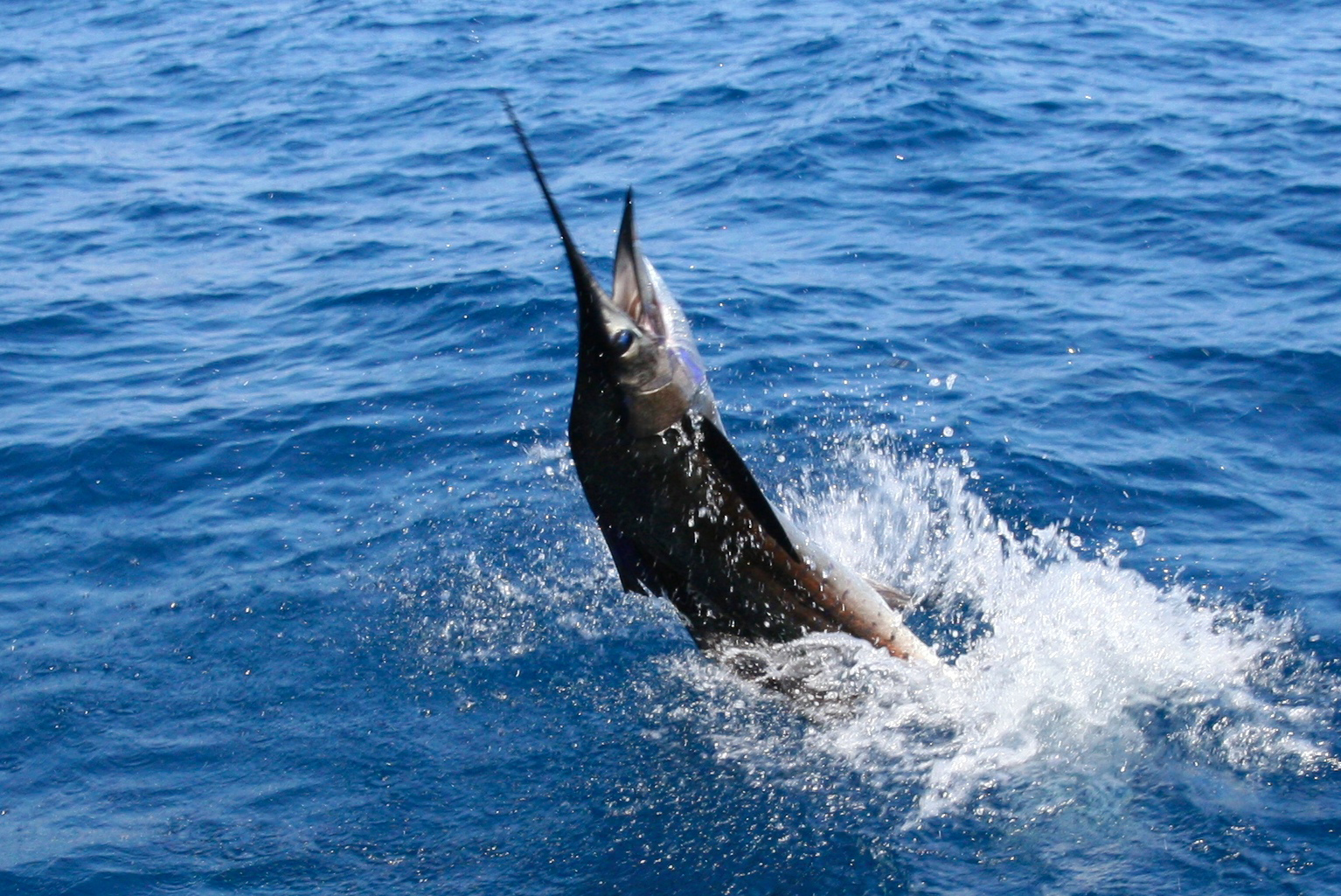 Feature: Guatemala Sails on a Fly 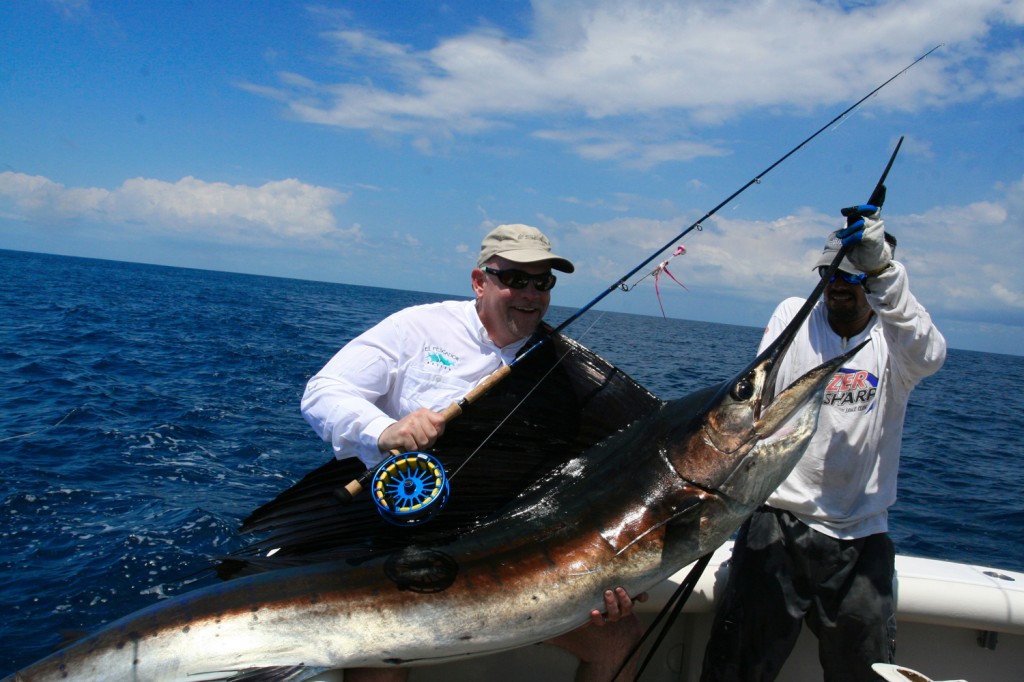 [dropcap]I[/dropcap]n March of 2012, after clearing customs at La Aurora International Airport in Guatemala City, I walked out into the brilliant Guatemala City sun and scanned an unfamiliar landscape of native faces and read tour placards that were pasted on every square inch of wall space and on a sea of billboards. By chance, I found the sign with the name of Casa Vieja Lodge, my destination. It added to my excitement. I wanted to get to Ixtapa, on the Pacific coast of Guatemala where the lodge is located ASAP, but I had to wait around for my friends to individually arrive. After meeting up with Frank Moses, Sam Frasier and Keith Billings, we traveled by car the hour and a half it takes to reach Casa Vieja Lodge, Ixtapa, Guatemala – we were transfixed by the culture that surrounded us. 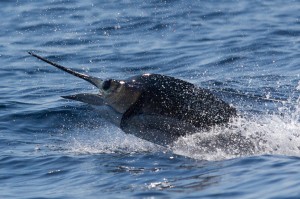 The Pacific side of Guatemala, widely known for its great sailfishing, was a destination I’d wanted to fish for many years. Every year my interest was piqued by at least two or three articles in fishing magazines that covered Guatemala sail fishing. Stories that told of its waters producing large numbers of sailfish raised and caught on a regular basis with boasts of landing more than 40 Pacific sailfish on a fly rod in one day. It didn’t seem possible, but I would soon have an opportunity to find out if mission impossible was possible.

My friends and I would fish for three days with Captain Mike Sheeder aboard the Intensity with mates Flacco and Ricardo. Sheeder has been fishing in Guatemalan waters for seven years. He’s a blue water transfer from Hawaii. His boat and equipment are totally dedicated to chasing billfish.

On the first day, we fished standup with conventional gear. The run out to blue water was a little over an hour from the dock. The weather and seas were perfect. Flacco and Ricardo worked hard rigging baits, billing fish, opening cold drinks and serving hot meals that were prepared on the boat. At the end of day, we had caught 22 Pacific sailfish and two dorado. The aerial displays performed by the sailfish were incredible. One dorado was the huge bull pictured – an outstanding fish. 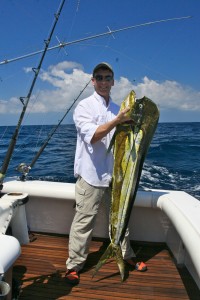 At breakfast on day two, the morning was full of excitement and we were all on full alert. On my last cup of great Guatemalan coffee I asked if anyone was interested in trying to catch some sails on fly. Enthusiastically, everyone agreed. It would be a first for Frank, Sam and Keith and it turned out to be a decision they’ll recall for all their years to come.

Many years ago in Costa Rica, I was taught by Dale DePriest (owner and operator of Mission Lodge in Alaska and Accension Bay Bonefish Club in Mexico) how to present a fly to a teased up sailfish. Dale is a world class fly fisherman and very generous with his time and willingness to share his experiences. The hook set we used in Costa Rica was the conventional wisdom saltwater strip used on tarpon and other fish. That said, I was bold over by the first thing Captain Sheeder told us to do – change that method of setting the hook. He wanted us to use the reel drag to set the hook and not touch the line. Needless to say, I was skeptical. The plan was to get the sailfish teased up to 20- to 25-feet from the transom, take the Intensity out of gear, yank the teaser and then present the fly in the clear water alley on port side side (if right handed) – away from the mid-transom white water wake. This tactic lets the sail see the fly right away (clear un-bubbled wake water) and creates the opportunity for it to eat the fly. Once the sail comes tight with a drag set hook-up, you insure a better hook-set by pumping the rod while pointing the tip directly at the fish. You never lift the rod tip high – keep the rod down and to the side – use your legs and the butt part of the rod – not the tip. It’s a whole lot happen’ in small window of seconds – especially mind boggling when considering the level of experience in our group. 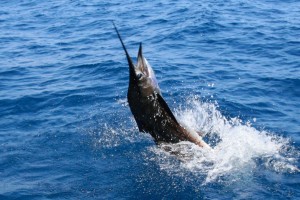 We hooked and landed one out of the first ten fish teased up – our practice time for what was coming. By the end of the day, we had landed 23 Pacific sailfish on fly! Each of us had caught at least five. Twice, we had double hookups on flies. We never went more than 15 minutes without raising a fish. I ended up with a sailfish that was by far the largest I had ever seen. Captain Sheeder pointed out that Flacco weighed it at 135- to 140-pounds – bigger in length and weight than Flacco himself.

One of the advantages of fly fishing for sails using the teased up method is that most of the action is within 50-feet of the boat – you’re up close and personal with a very large fish that is going totally berserk after being hooked. It’s a phenomenal rush. On two occasions, we had fish charge the boat. Both times Flacco jumped between the angler and the fish in case it came into the cockpit – pretty exciting stuff to say the least and very hard to describe in words. It was truly an epic day!

Hey, we’re getting pretty good at this

After basking in the glow from catching that many sails on fly the day before (and consuming too many Casa Vieja cocktails that night), we went out for the third day and final day. We were only interested in fly fishing. By the end of the day, we caught another 12 sails on fly – each of us had three. The last was landed in the final 15 minutes by Keith.

My once in a lifetime trip was an incredible success and a new beginning in fly fishing for Keith, Sam and Frank. 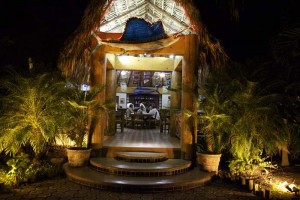