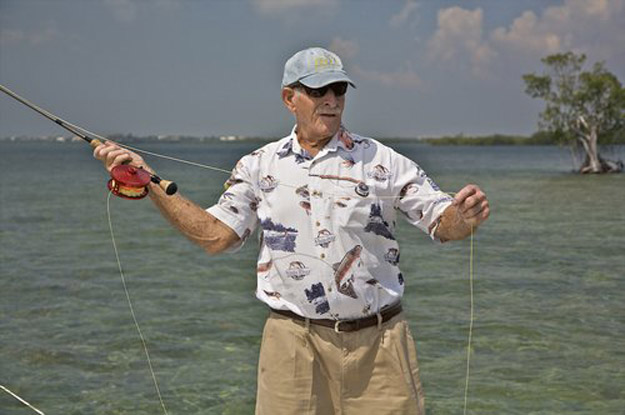 [dropcap]B[/dropcap]ill Curtis, one of South Florida’s greatest anglers and legendary guide, recognized for his contributions to sports fishing by the International Game Fish Association‘s (IGFA) Hall of Fame, passed away on Friday, October 21, 2016 at the age of 91.

He became a lifelong acquaintance of mine after helping Capt. Andrew Derr and I write the still popular Fly Fishing the Florida Keys, published in 2005. I made it my business to visit with him at Bass Pro Shops in Dania Beach and then in Miami when nearby. I’d call him evenings when a trip was planned for Biscayne Bay, Tamiami Trail, or the Florida Keys, especially when planning a trip that included being around the Ocean Reef Club or North of it. Bill was always available and willing to help.

His fingerprints can be found on how saltwater angling became a fly fishing sport in the Florida Keys which lead to the Bahamas and then, the world.

He was instrumental in the establishment of Biscayne National Park because of his knowledge of what shipping lane excavation would do to the bay. He made it a point to develop a close relationship with then, Secretary of the Interior Stuart Udall; Secretary of Commerce, Luther Hodges and Bud Hoover of Hoover Vacuums – all of whom he guided often.

He mentored many other guides and anglers who simply asked for his help – like Stu Apte, who also became an IGFA Hall of Fame guide, and one of the best tarpon guides in South Florida. Bill also helped Capt. Mark Giacobba become one of the new breeds best South Florida guides. The poling platform was Bill’s idea

Many of Curt Gowdy’s popular fly angling show themes on The American Sportsman were planned by Curtis, including locations, dates, tides and use of his hand-tied flies, and as the angler being filmed. Bill said: “There just were not any guides in Key West then and that’s where all the best permit fishing took place.”

Bill was also one of the founders of the Bonefish & Tarpon Trust which has climbed to world class stature through globally recognized research and innovations in the study of bonefish, tarpon, and permit.

Bill worked at Johnny Morris’ Bass Pro Shops in Dania Beach and then in Miami up until the time of his death. Back in the day. Helping a kid get started.