The American Museum of Fly Fishing (AMFF) is the steward of all things fly fishing—the sport’s history, traditions, and conservation ethic. The physical home of the museum is in Manchester, Vermont (it’s well worth a stop because of its excellent collections and because it happens to be right next to the Orvis flagship store). Last night, the museum took temporary residence in New York City, in town to bestow its highest honor, the Izaak Walton Award. This year’s recipient: James Prosek, the 41-year-old, 21st-century Renaissance man—artist, writer, poet, naturalist, singer-songwriter, raconteur and all around lover of life. 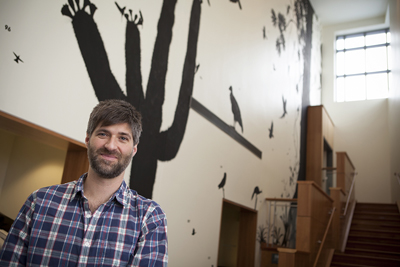 Artist, writer, and naturalist James Prosek’s “Wall of Silhouettes” mural spans the full length of the north wall in the Cornell Lab of Ornithology’s visitor center.

Walton is a revered figure in the fly fishing world. He authored the book, The Compleat Angler (1653), which is reputedly the third highest-selling book of all time, behind the Bible and the works of Shakespeare. Walton was a pastoralist, a man forced out of the city to the countryside during the English Civil War. He found his peace and his muse in fishing and communing with nature. Walton, as Prosek has pointed out, wasn’t actually much of a fly fisherman himself (Walton had a friend handle the fly fishing parts of the book), and yet his ethic and his musings on fishing and nature are the prime attractions to those in the fly fishing world.

It will be hard for the AMFF to ever again find a more worthy recipient of this award than Prosek. After all, he has written a book (The Complete Angler) about literally walking in the footsteps of Walton. Prosek has walked in those footsteps in a figurative sense, as well, his dozen books and countless paintings inspired by the natural world and every bit as thought provoking and profound as Walton’s work.

David Nichols, the AMFF’s event chair, when introducing Prosek, happened to recite my favorite Walton line: “Rivers and the inhabitants of the watery elements are made for wise men to contemplate and for fools to pass by without consideration.” Sure, the line is a little snooty. But I think about it often when fishing in the Catskills. Sometimes, when fishing among the crowds flock that there during prime mayfly hatches, I’m left wishing there were more fools.

Prosek started his speech by thanking everyone in the room . . .