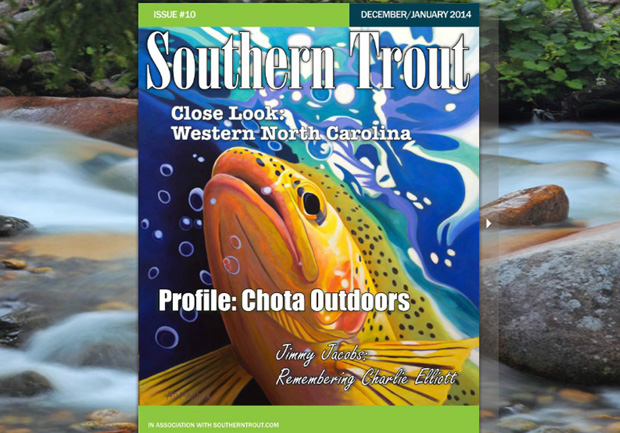 [dropcap]R[/dropcap]obert D. Clouse, CEO of Stonefly Press announced today that an agreement was reached to co-publish and co-manage Southern Trout magazine, a widely acclaimed fly-fishing periodical launched in 2012 by Southern Unlimited, LLC. A bimonthly digital publication, Southern Trout focuses on fly fishing for trout in the Southeastern region of the United States. Stonefly Press is a fast-growing publisher of fly-fishing books, as well as an events and engagements booking agent for its authors and a travel outfitter for author-hosted fly fishing destination trips. Its next publication, 50 Best Places Fly Fishing the Northeast is scheduled for release at the end of July.

“We are excited to enter the magazine market in partnership with Southern Trout and we’re encouraged by its tremendous potential” says Clouse. “It’s one of the most unique fly-fishing magazines in the country, with a distinct audience and identity, and it excels with its content-rich approach to fly fishing. And our goals are the same – to serve the ever-expanding southern fly fishing market, while introducing that unique regional identity and appeal to a national – and international – audience”

“While Stonefly Press will contribute to and collaborate on the final publications, editorial control will remain with its founding publisher, Don Kirk, whose thirty years of writing and publishing on Southern fly fishing unquestionably establish him as one of the most knowledgeable and experienced voices on this region.”

“We are extremely pleased to pair Southern Trout with Stonefly Press,” says publisher Don Kirk. “Stonefly Press brings a level of expertise to the publication that will enable Southern Trout to become one of the country’s top fly fishing publications, while continuing to honor the identity we’ve established.”

Southern Trout will continue as a free, bi-monthly publication available at. Editorial content will be expanded to include articles and content from the Stonefly Press stable of fly fishing authors and books. Southern Unlimited, LCC is based out of Montevallo, Alabama. Stonefly Press is based out of West Palm Beach, Florida.

Established in 2012 and based in Montevallo, Alabama, Southern Trout magazine is a free online bimonthly magazine focusing on fly fishing for trout in the Southeastern region of the United States. http://www.southerntrout.com.
About Stonefly Press

Based in West Palm Beach, Florida, Stonefly Press publishes innovative fly-fishing books in print and digital formats, including chapter downloads for destination waters. They focus on creating an experience community shared actively between authors and enthusiasts, and donate a percentage of profits to more than a half dozen water conservation groups, including American Rivers, Bonefish & Tarpon Trust, California Trout, Riverkeepers, and Western Rivers Conservancy, among others.