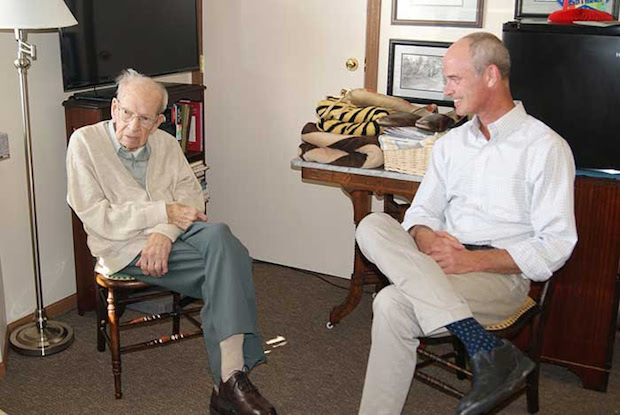 Industry News: “Take care of the fish and the fishing will take care of itself.” Art laying down a line on a chilly spring day. Michigan TU image.

[dropcap]A[/dropcap]rt was one of the original founders of Trout Unlimited.  He was an integral part of the conception of TU, and played uniquely critical roles in early advocacy efforts and the expansion of TU from a Michigan-based organization to a national conservation giant.  Art was the effective grassroots mobilizer for the early efforts; whether lecturing customers to his Saginaw fly shop on their responsibilities for conserving what they love; or on the road giving stump speeches to waves of new members creating new chapters across the country in his role as the first Executive Director of TU.

“What Art did was to build an institution-an institution that began with him and a handful of other people along the banks of the Au Sable River who were tired of the state’s masking habitat degradation through stocking. Today, the “house that Art built” includes 400 chapters, over 155,000 members, and 240 scientists, biologists, and other professional staff who serve to make fishing, and the places that “fish live, better.”

“All of the founders played unique roles, some were the scientists, some the politicians, others the administrators and financers.  Among them, Art was the activist, orator, mobilizer, engager, recruiter, grassroots builder.  His skills and passion for this work were essential to the organization’s success.  TU would not be what it is today, and would not have been able to do what it does for our coldwater fisheries if it were not for Art.”

“Art lived a long life, built an institution to last, got to watch the seeds he planted grow, and left the world better than he found it.  That’s a success, and a life worth celebrating. Rest in peace Art, rest in peace.”

Art is known for penning the “Philosophy of Trout Unlimited,” which you can view online . . . . It’s best summarized by the saying, “Take care of the fish and the fishing will take care of itself.”

As full obituaries and tributes become available Michigan TU will post them on their web page.  They will also post information concerning his funeral service and memorials here this week, as soon as they become available.