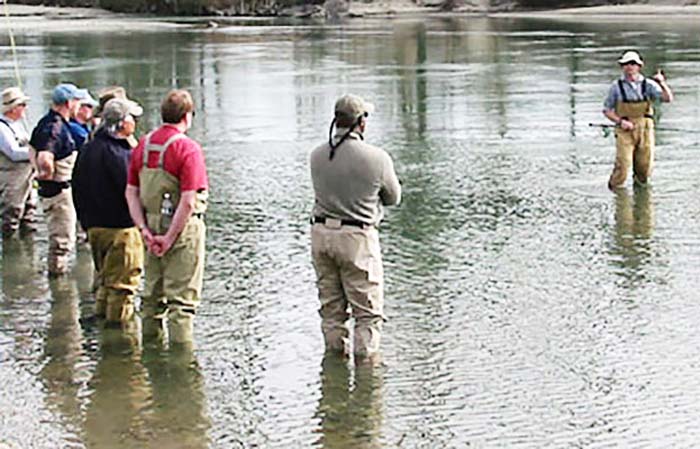 It makes sense, say nothing and they will learn

How to teach someone how to fly cast and say nothing

[dropcap]I[/dropcap]cannot remember anyone ever accusing me of being a good fly casting instructor. That, of course, is my remembrance of thing past and I may well be just recalling criticisms which we all take with ‘no’ grain of salt. I remember impatient and expect too much as beat downs. So, over the past years, I’ve avoided teaching fly casting to anyone because it seldom worked out, according to me.

I had gone rogue years ago and adopted switch rods. Actually, I was using my 9-footers as two-handed equipment years before getting a switch rod. How it happened was picking up on the advantages that two hands produce. Typically, much longer casts more effortless casting (a lesser physical effort which was the initiator), and no backcast required, or double haul by going back to single handed, which is the fun part of the single handed casting.

Spey casts are intuitive and to a single handed caster, with a double-haul ingrained, it makes sense immediately. The cast is all about slowing down – enjoying a natural cadence, and the byproduct of that cadence is feeling the rod load. And that’s the auto-teach element and more valuable than a ‘picture being worth a thousand words.’ As a matter of fact, if you’re still talking when the newbie is feeling the rod load you’re interfering with the better communication; feel.

My saying yes to teach was, in a way, selfish. I wasn’t going to teach conventional fly casting; first. I wanted them to start by enjoying how graceful and easy casting a fly can be

Mike was a typical male at 15 years old, gawky, socially inept, looked at his shoes when addressed, pimpled with a mouthful of braces that looked painful. His mom, my friend’s daughter, came, so I had an unwanted audience, which grew to add fellow residences of my apartment complex.

I wanted to find out if this 15-year-old kid could learn to cast almost on his own. I said nothing, just demoed a half-dozen or so non-verbalized “lawn” casts using exactly the technique you’ll see if you watch the video, which is a step into a more advanced Spey casting technique, but probably the only way to perfect the Sakgit cast on the lawn (without water)

I asked Mike if he’d like to try. I gave him my R. B. Meiser switch 3-weight rod with 5-weight RIO Gold Trout line. That switch rod is equivalent to a 5-weight 9-foot rod. Mike anxiously said yes, while staring at his shoes, he’d like to try. I said nothing. The first attempt was too fast, but he completed the cast. I said nothing. Again, no cadence, but completed the cast. By about the seventh or eighth cast, he was into it, and by 12 or 13 casts he was as smooth as the guy in the video. My only comments to him were complementary after each of the latter casts.

I told him to learn how to fly fish by going to Gary Meriman’s Fish Hawk fly shop and ask for Chad Bryson, or Orvis Atlanta and ask for Justin Powell and to call me first so I could cut the intro BS out and they’d know to get right to it.

It made me feel good to teach with my mouth shut

Mike was fortunate to be coordinated, enthusiastic, and have a mom and grandma that were all in for their offspring. I gave them information on Meiser adding – you can probably get cheaper on eBay or maybe Craig’s List, but they didn’t seem interested in less than the Meiser rods.

UPDATE: Seven months later – Mike is well on his way to having a future in fly fishing, according to his mother, who always runs me down when she visits her mother. I think she wants me to teach her?