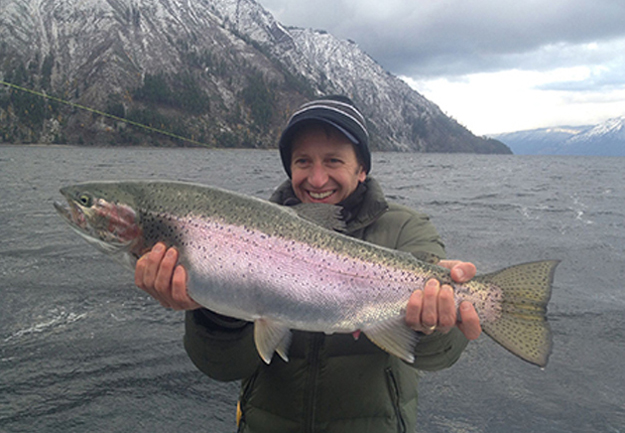 It turns out that sex can move mountains

[dropcap]A[/dropcap] Washington State University researcher has found that the mating habits of salmon can alter the profile of stream beds, affecting the evolution of an entire watershed. His study is one of the first to quantitatively show that salmon can influence the shape of the land.

Alex Fremier, lead author of the study and associate professor in the WSU School of the Environment, said female salmon “fluff” soil and gravel on a river bottom as they prepare their nests, or redds. The stream gravel is then more easily removed by flooding, which opens the underlying bedrock to erosion.

“The salmon aren’t just moving sediment,” said Fremier. “They’re changing the character of the stream bed, so when there are floods, the gravel is more mobile.”

The study, “Sex that moves mountains: The influence of spawning fish on river profiles over geologic timescales,” appears in the journal Geomorphology.

“Any lowering of the streambed translates upstream to lower the entire landscape,” said Fremier

Different salmon species can have different effects, Fremier said. Chinook salmon can move bigger pieces of material, while coho tend to move finer material. Over time, this diversification can lead to different erosion rates and changes to the landscape.

The paper is another way of looking at the role of living things in shaping their nonliving surroundings. Trees prevent landslides; beavers build dams that slow water, creating wetlands, flood plains and habitats for different trees and animals.

In 2012, researchers writing in Nature Geoscience described how, before the arrival of trees more than 300 million years ago, landscapes featured broad, shallow rivers and streams with easily eroded banks. But tree roots stabilized river banks and created narrow, fixed channels and vegetated islands, while log jams helped create the formation of new channels. The new landscape in turn led to “an increasingly diverse array of organisms,” the researchers wrote. Similarly, said Fremier, salmon can be creating new stream habitats that encourage the rise of new salmon species. On the other hand, streams where salmon drop in number or disappear altogether could see significant long-term changes in their profile and ecology.