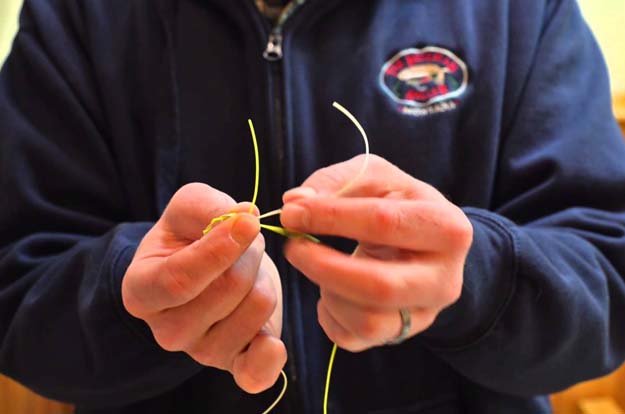 May the knots be with you

[dropcap]A[/dropcap] guide/offshore captain never asks a client what knot should they use to tie on a fly. Why? Well, not because he or she is a snob or think they can’t learn anything new, but because the knots they tie have been tied for decades and don’t fail at the connection. They can tie knots like the Non-Slip, Albright, Bimini, Clinch, or any knot, correctly, in the dark.

Your options, endless. An example, “how to tie a fly to a tippet” will yield hundreds of opines and ways to tie the best blah-blah knot – according to the “inventor” – who swears it’s unique, but isn’t.

Your opportunities via all sources on the best fly fishing knots are no less than in the hundreds.

So let’s get scientific, look at test-pull results, then we’ll know for sure – or will we?

• Who tied the connections?

• Are the connections/knots all equal in turns, wraps, where tag enters a loop, and on and on?

• Were the brands and pound-test rating performed on the same mono, fluorocarbon, or braid?

• What knots deserve to be tested. There are far too many to test them all.

• What machine tests the knots?

• Who is the tester?

•  The amount of time, corporate space, payroll, and instrumentation singularly devoted to fishing knots, or even knots overall, that would be industry embraced, would be unrewarding, financially.

NOTE: A lot of so-called new knots are just tweaks to named knots or outright shoplifting. For example, the Uni-Knot was not invented by the claimed author. It was invented by Norman Duncan. The correct name is Duncan Loop. Jimmy Albright’s knot, the Albright often gets pirated. There are others, of course.

The stark difference between saltwater knot needs and fly fishing in freshwater knots. The conversation regarding the latter focuses, mainly, on trouts. There is no Bimini Twist Knot needed in freshwater angling for trouts, and a Blood Knot doesn’t get votes for big game fly fishing offshore. What, then, is the best thinking concerning knots?

Saltwater knots are the most complicated, least forgiving and demand the most. That said, a 6X line clinch knot requires the same attention to turns, wraps and securing as any Bimini Twist does. It’s just a little easier to get good at.

In the beginning, you forage knots – choose, ask, and practice tying. Failure at the knot connection that you tied will harden you. You will not make that mistake again.

In the end, you stay with knots that you have confidence in – confidence earned by tying them a thousand times without losing “that” fish to a knot you tied.

Featured Image: YouTube/Tying a Blood Knot with The Bozeman Angler . . .

Three tools, ALL which can be pocket carried or attached to a lanyard, aid making knots we all use or could and should use. These tools make better -more secure connections and make life easier.  Yes, there is an investment, all three under $30, total. Your local fly shop, big box stores, or online. Three in One Knot Tying Tool

• Tool One (Three in One Knot Tying Tool): A clinch knot, improved clinch knot, and tippet knot (Surgeons Knot). You can also tie a Seaguar Knot with this tool and the Hemostat Knot as well.

• Tool Three (20/20 Magnetic Fly Threader): This is for the trout folks fishing #20 and smaller flies. It threads the eye for you.