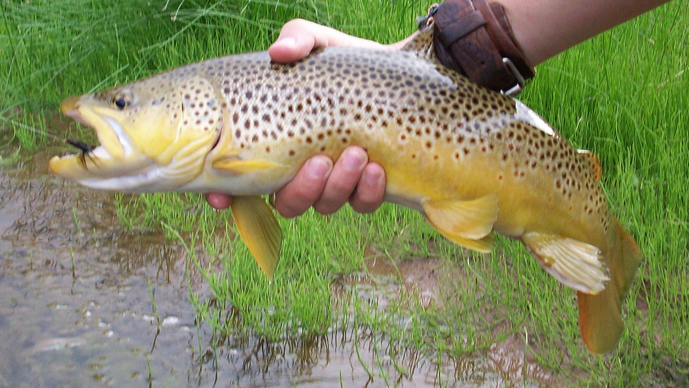 Show them a segmented worm and let it squirm

[dropcap]F[/dropcap]or trout anglers of the manner born, a worm used for an aquatic capture of trout would never be spoken about with ones head up. Talk of even fly fishing with a leech pattern for trout would be considered gauche with social ostracisation from the “men only” fishing club following such confession.

But for progressive fly fishers, these little slimeballs are known to be for trout, carp, salmon, catfish, bass, walleye, tarpon and more what a slice of Arthur Avenue (Belmont area of the Bronx, New York) slice of pizza is for any Foodie – irresistible.

There isn’t a body of water in the world that is absent of leeches. Some anglers of the fly orientation fish leeches exclusively – that would include Woolly Buggers. And pardon me, but no tournament bass fisher is without a lure box full of leeches and of course, another with worms. Photo Pijawka Konska. The head is the thin end. Both ends have suckers. One to eat with the other to anchor.

Leeches, like all annelids, are segmented worms that include earthworms, freshwater worms, and marine worms

Leeches, like all annelids, are segmented worms that include earthworms, freshwater worms, and marine worms. The American Museum of Natural History leech expert, Mark Siddall wrote: “Every continent and body of water on the planet has leeches, except Antarctica. And even then there are marine leeches in Antarctic waters. Humans have co-existed with leeches for so long that just about every language has a word for leech.”

Further, Mark said: “Leeches do not have bristles, and the external segmentation of their bodies does not correspond with the internal segmentation of their organs. Their bodies are much more solid as the spaces in their coelom (fluid-filled cavity) are dense with connective tissues. They also have two suckers, one at each end to eat and anchor. For certain animals on land and in freshwater or saltwater leeches are a feast.”

Siddall added: “Most leeches don’t suck vertebrates’ blood, but are predatory and live in their environments feeding primarily by swallowing other invertebrates whole. . . . Almost 700 species of leeches are currently recognized, of which some 100 are marine, 90 terrestrial (land-based) and the remainder freshwater.” You can go to a lot of got-everything fly shops and be surprised at the limited pattern inventory of leeches and worms. You may also wonder why the bafflement or pooh-poohing when inquiring about annelids? Most anglers that fly fish are in the same unknowable place about leeches. Bass fishers have been leech fans forever. Why? Because they catch fish.

How a leech wends its way

Successfully fishing leeches have a lot to do with how you swim them, how you tie them (color, size, in-water ambulation) when you fish them, and where you fish them.

A leech swims by elongating and contracting its body. It goes from long and skinny with a taper, to a blob in a nanosecond and then repeats ad nauseam.

Think movement as being snake-like, but not side to side but up and down – moving slowly forward about 10- to 12-inches every two seconds – plus or minus. The most evidenced movement has three up and down parts. Head up and “U” shape to a midsection up and then an upside down “U” another curling “U” and then the tail. If there were a three sectioned articulated fly – that would be the “cat’s meow.” A handful of leeches from Mille Lacs Lake. Minnesota. The lake was voted the best bass lake in the United States for 2017. The abundance of feed like these leeches keeps the bass and walleye fat and plentiful. Image Dan Kraker / Minnesota Public Radio – News.

The head of a leech is the narrow – pointy end. A bait fisher swims a hooked leech by the fat end – letting the leech ambulate naturally while alive. A fly fisher has to tie with the leeches head at the eye of the hook. A better tie is a segmented tube fly with neither of two hooks visible. A hook tied leech is also better when articulated.

An adequately tied leech pattern is exceptionally unbalanced – always very weighted and head heavy. When swum, the extra weight should magnify the imbalance. The speed and depth of your retrieve are a seek and you will find – sometimes quickly, sometimes slowly, but a fish will always materialize if you work for it.

In rivers and streams, leeches seek shelter under things but sometimes drift with the current or hang where there is structure. Remember, they’re always looking for food just like “everybody” else in the water. Sometimes your entire day’s responses will come from dead drifting a leech pattern. When are leeches most active? According to Brian Chan from British Columbia, Canada, a freshwater biologist as well as professional guide, leeches, although active at all times of the day are more active in the early morning and evening. Spring and especially fall are prime.

Leeches forage at optimum safe times like all preyed upon fish and other aquatic creatures. Midday is not one of those times.

For many leeches, this early morning and evening hours emergence is also signaled by being sheltered from bright sun conditions in the sand, and under rocks and other structures. Evenings, Chan says, can be particularly active times for many types of leeches.

Canadian guide, writer, outfitter and entrepreneur Phillip Rowley of Fly Craft Angling writes (paraphrasing): “Leeches can dramatically vary their size and shape. . . . when threatened, leeches will often rapidly curl up in a tiny ball. That behavior is responsible for what many anglers refer to as short strikes as trout will often ‘smack’ a leech to get it to curl up for easier consumption. Expecting this behavior and knowing to ‘halt’ the retrieve and allow the pattern to fall and fold can be successful in turning short strikes into takes.”

“Leeches can be found in virtually all colors, though most are olive, black, brown, tan or gray. What color leeches your particular stream or lake holds is typically a function of water quality, clarity, streambed color, and pH – inspection generally is the best way to decide which imitation to use. Much like when searching for nymphs and larvae, lift up and look under rocks in search of leeches. But, don’t neglect simply looking for leeches swimming in the water column. To an eye focused on the task of spotting them, swimming leeches can be surprisingly easy to see.”

How big do leeches grow

Leeches can grow to over 8-inches in length, but for some reason trout and smallmouth bass seem to prefer smaller leeches. There doesn’t seem to be any hard and fast rule about how big is too big, but most sources seem to agree that leeches under 3-inches in length are preferred. For this reason, leech imitations tied on hooks in sizes #6 to #12 seem to be most effective.

Leeches can grow to over 8-inches in length, but for some reason, trout and smallmouth bass seem to prefer smaller leeches. There doesn’t seem to be any hard and fast rule about how big is too big, but most sources seem to agree that leeches under 3-inches in length are preferred. For this reason, leech imitations tied on hooks in sizes #6 to #12 seem to be most effective.

Brian Chan, previously mentioned, seems to have made a life out of fly fishing with leeches. In these two YouTube videos, he discusses how-to with leeches: How to Fly Fish Leech Pattern Trout Flies on Stillwater’s. And When And Why You Use Micro Leeches.