No fly tyer should ever fear rubber legs again 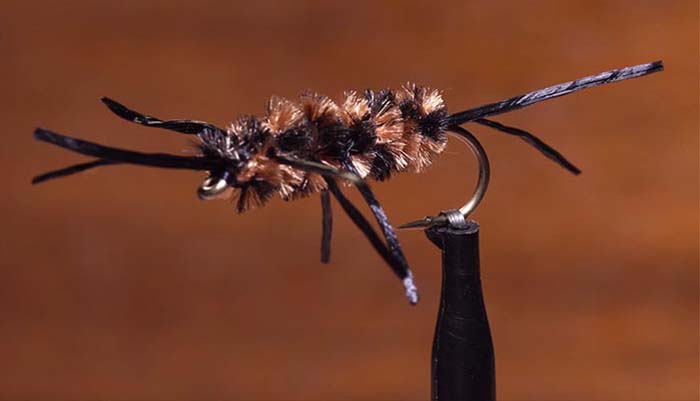 I saw this video on my birthday and watched because it addressed a bugaboo that many tyers, like me face and come to a conclusion, like me, that one should avoid tying anything with rubber legs for fear of ending up in room padded with rubber.

That all changed when I copied Tim Flagler’s rubber tie-in technique which I found circling through feeds —  a Monahan Orvis Blog:

The Pat’s Rubber Legs was created by guide Pat Bennett — of Hyde Outfitters in Island Park, Idaho—building on other big stonefly patterns, such as the Girdle Bug. This particular color pattern–black and coffee–is a particular favorite of guides throughout the Rockies, and they’ll fish it year-round as a searching pattern.

The only problem with Pat’s pattern is that it looks simple but can be rather frustrating to tie because the rubber legs can be hard to handle. But in this great video by Tim Flagler of Tightline Productions, you’ll learn a couple of neat tricks for attaching the legs that make everything easier. If you haven’t yet invested in some UV-cure resin, this video might convince you that you need it.

I tied up a half dozen strictly as called for in Tim Flagler’s recipe, and tied according to the instructional YouTube video. Fly one thru three were discarded and three of the six I kept got to play in a nearby creek where I’d seen small rainbows. Voila, trout on – worked best bumping along and into pools. I fished pre-dawn. Lost two flies, hooked three trout and brought two to hand – early release on the one [yea, sure]. All maybe 2-pounds [left over from saltwater measuring].