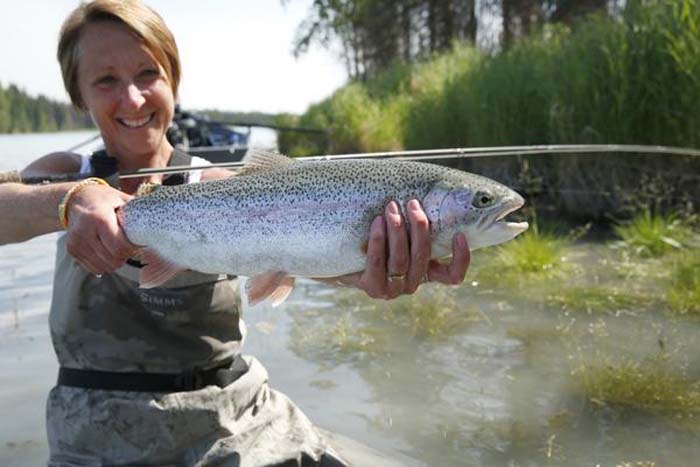 A nice Alaska rainbow caught by Linda Leary in Simms’ waders. Fishe® Wear was founded in 2015 by Linda in Anchorage, Alaska. Her vision created comfortable, functioning clothing for women that fit and are fashionable – allowing for confidence on any adventure!

After years of fishing in borrowed men’s clothing, Linda Leary launched a line of practical apparel and totes in an array of funky designs. At ORVIS and your other friendly fly shops.

[dropcap]L[/dropcap]inda Leary wanted to create a line of fishing apparel for women. She’d been fly-fishing ever since she was a kid growing up in Maine. Back then, she says, there was a lot less women’s gear, so she typically borrowed long johns from her dad and husband. After wearing her fair share of stodgy waders and drab shirts built with men in mind, she was determined to create a better option. She founded FisheWear in 2015, with the goal of making women’s fishing clothing and totes that were functional and colorful.

But she wasn’t a clothing designer by profession. After college, she’d moved to Alaska and gotten into the trucking business. She became a partner at Carlile Transportation and grew that business from eight to 700 employees in ten U.S. facilities. She pitched the History Channel on the idea of featuring Carlile on a reality TV program, which resulted in the Ice Road Truckers series.

Five years ago, Leary sold off her portion of Carlile and found herself with enough free time to launch a passion project: FisheWear.