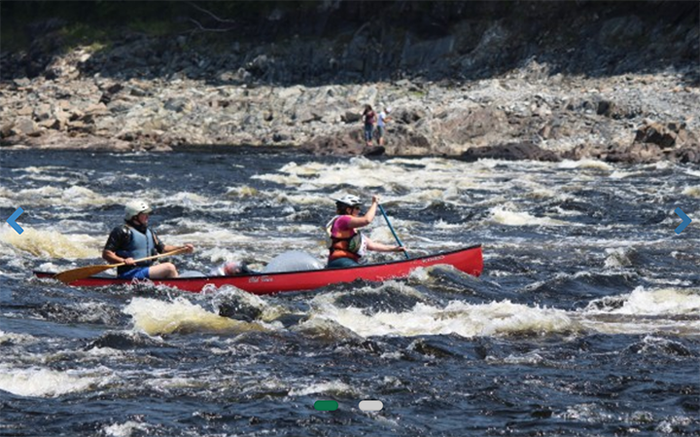 Maine could magnify its allure by removing more dams

Maine Voices: State could magnify its allure by removing more dams from its rivers. Losing a bit of hydropower in order to allow fish migrations and boost outdoor tourism is easily worth the trade-off. [dropcap]O[/dropcap]n any summer weekend, Interstate 95 north is clogged with cars and campers full of people from away – often from far away – excitedly anticipating their Maine vacations.

I’ve been one of them. Why do we endure these slogs to reach the Pine Tree State? Mostly it’s for the outdoors: refreshing northerly breezes; clear indigo lakes; misty vistas viewed over rocky ocean shores; seaside lobster, and, yes, vast expanses of pine trees. But to this visitor there is one glaring void among these al fresco offerings: The state’s rivers remain steadfastly shackled by the remnants of industry. Maine could greatly enhance its allure by setting more of its rivers free.

As a conservation biologist and as an angler, I have found that to drive around Maine is to notice dam after dam. Many were built to control flows for log drives and were later retrofitted for hydropower. Maine has more than a thousand dams, of which 240 generate electricity. These dams have a total capacity of 726 megawatts, for a low average of 3 megawatts per dam. But three-quarters of Maine’s hydropower comes from the state’s 24 largest dams, meaning that many of the remainder generate slight amounts of electricity.

Hydropower dams are not environmentally clean, as so long touted by the hydro industry. Most notably, hydropower dams block the spawning migrations of important fish such as Atlantic salmon, shad, river herring and sturgeon. The effect of these barriers on fish populations has been devastating. Some 80 percent of the state’s river habitat has been cut off by dams, causing declines in fish runs of as much as six orders of magnitude.

The loss of juvenile river herring that would leave their home rivers to enter the sea was one of the chief causes of the demise of Maine’s inshore cod stocks. And the Kennebec once provided harvests of salmon of up to 30,000 per year. Today, annual returns of salmon to the river are usually no more than two dozen – despite heavy stocking. On July 7, 2013 the Veazie Dam removal began, with a celebration held on the east side of the river. Dam removals are the most effective solution to restoring rivers, and Maine has had a few noteworthy successes. When the Edwards Dam in Augusta was breached in 1999, it reopened 17 miles of the main-stem Kennebec, quickly hosting migratory species for the first time in 172 years. It also allowed river herring to once again reach the tributary Sebasticook River. In a few years the Sebasticook’s river herring run rocketed from zero to 3 million, inspiring an annual Herring Festival in Benton.

But so much more could be done. Recently I visited the Mousam River in Kennebunk, a small watershed shackled with 14 dams. A few relic shad and modest numbers of river herring clustered below the first barrier, Kesslen Dam, blocked from reaching their primordial spawning reaches. Not far upriver are two more hydropower dams. The three combined produce only 0.6 megawatts – a mere 1 percent of local energy needs. This is a quantity so meager that it could easily be exceeded with a small solar farm or even a local energy conservation initiative tied to “saving our river.”

The Mousam’s dams lack fish ladders, but they are not the answer to restoring the river’s fish runs because these engineered devices would require much of its flow to function properly, leaving even less water to drive the turbines. Yet, if reopened, the otherwise healthy Mousam could see shad numbers exceeding 50,000 and river herring of more than a half million while likely also becoming the best sea-run trout river in Maine. Likewise, the Edwards Dam removal was only a beginning on the Kennebec, a huge watershed with enormous ecological potential but one that is blocked by one dam after another from Waterville to Skowhegan and beyond.

Maine’s tourism industry is inextricably tied to a healthy environment. And rivers are an integral, flagship part of any landscape, a touchstone for purity and wildness. Salmon fishermen traveled far and wide to have a chance to land the catch of a lifetime in the Penobscot when it still had a fishable run. Likewise, other rivers full of shad, striped bass and maybe even salmon would be an economic boon from visiting anglers. With alternative energy offering a ready replacement for modest amounts of hydropower, there is manifest opportunity to help make Maine’s environment whole again.

Maine’s tourism website invites vacationers to “get inspired.” On another recent trip to Maine, I stopped at a park in Gardiner overlooking the Kennebec. A bald eagle was busy scanning the waters. Suddenly it wheeled, plunged and snatched a shad from the river, a regal act that could only have occurred there with the opening downriver of the Edwards Dam. I felt inspired. John Waldman is professor of biology at Queens College in New York and author of “Running Silver: Restoring Atlantic Rivers and Their Great Fish Migrations.”