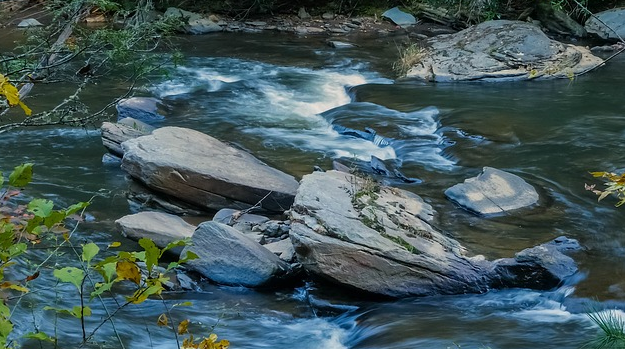 Too hot to trout fish? Try the mountains’ brookies

By Skip Clement with art by Thom Glace

[dropcap]I [/dropcap]borrowed Angie Roth’s new Orvis 7’ 6” glass 3-weight fly rod, one of the two Superfine series, one glass the other graphite. She liked the glass, but not as much as did. I had talked her into it when she was in the Atlanta Orvis store buying more clothes than she’d ever wear. The nearby Goodwill sales get a bump once a year when she turns them in unworn. I said nothing, she was buying lunch.

The following day we headed up to her North Georgia family farmstead where we’d stay – use as basecamp. We were on a mission – an ambitious undertaking for two septuagenarians – hike into small streams that bordered and crossed the GA/NC lines and zig-zagged Ebberly property, which meant we’d be risking a fine, neither of us had a North Carolina license.

I was armed with the glass rod mentioned and she, 4-weight graphite, Echo E3-490. I had tied up an inventory of small streamers and surface ridding terrestrials including a dozen dragonflies – they seemed to be everywhere, and a bunch of dry flies and nymphs from Fish Hawk in Atlanta. We had enough flies to stay a month.

Angie’s family stocks their generations-old farm acreage water asset with rainbows, not many – it’s a family ritual to discuss that each spring what, when, how big, and how many. Some stockers always holdover and spawning occurs. I’ve caught several under 12-inches, which is smaller than stocked – supporting the holdover/spawn theory. Old family catch records (1969) have almost no mention of anyone except great, great Ebberly, his sons and then, after a gap, Angie and her sister. The record brookie was 7-pounds. Grandpa also held the family rainbow and brown records. The rainbow, looking a bit tired these days hanging over the den fireplace, had a plaque stating it was 14-pounds. A big league rainbow anywhere on earth.

What about the brown, I asked. Angie said the brown was in some taxidermist shop in Asheville for repair after a long night of drinking. When grandpa died it was still at the shop, but no one knew where the shop or artisan was – no paperwork in those days. That left record recollectioning to various factions of the living Ebberly scions. So all that seemed right was that the brown was more significant than the rainbow.

Angie readme in on the approach to fishing the Georgia/North Carolina mountain streams we’d fish, which included plenty of Ebberly Farm property. We’d encounter some big rainbows – all wild, some good specimens of brookies if we got up in elevation, and browns that tended to look too big for the water they inhabited. They also would be at a lower altitude.

The brook trout are the only native trout-like fish in the Appalachians. Actually, they were reclassified as char – genus Salvelinus, which in North America includes the lake trout, bull trout, Dolly Varden, and the Arctic char.

Angie said finding brook trout was the root problem, but stealth was the name of the game   as well as looking for them, finding and fishing for them. “Once located,” she said, “and guerrilla warfare tactics employed, brookies are easy to catch.”

Early bird gets the worm

We took the four-wheeler up as far as it would go before trees blocked us and then walked a worn animal track path along a ridge for about a half mile. When it crossed an overgrown logging trail, we took a break. After about five minutes, Angie fessed up we were waiting for Conroy. Of course, I said, Conroy?

Angie explained we’d hunt all day and not find brookies, the streams were hard to find – just rills she noted, spring-fed rivulets that tumbled into pools, and then a series’ of falls with all kinds of feeder streams.

Conroy arrived in a cutaway jeep that appeared to have survived a recent ISIS mortar and reassembled using disparate parts. The cab was well off the ground. The tires were knobby and immense – tractor pull looking. Was the windshield from an 18 wheeler? Yes, this is not uncommon, and August is a good viewing month. Image by Thom Glace.

Hi Conroy. He replied, “Get in”

The route was only memorable because we went too fast and we were unable to see more than a few feet in any direction. Angie didn’t seem tense, so I did down with insane too. We stopped. There was no clearing or identifying flora. We seemed to have stopped just for the heck of it. We grabbed our gear and followed Conroy who kept a pace unfamiliar to Angie and me. We finally met up with him on another logging road remnant, but peeled off in a matter of yards and made our way north, down into a steep canyon-like piece of real estate that looked worse than its bite.

Forty minutes later we stopped at a gigantic rock that gave us a view of a picturesque mountain stream with lively running water bouncing over rocks into pool after pool. There was no sign of a drought here, and the water and air temperatures no longer belonged to that Georgia summer we left a couple of hours before – the air was even cool in the sunlight.

Conroy had no use for me, he rigged up Angie and as much as said – “you jerk,” when I showed my fly selection. For Angie, he put on what looked like a Parachute Adams, and a peek in his box showed the usual suspects, Elk Hair Caddis, humpies, and in another a bunch of stoneflies? Mountain streams are not known for stoneflies – the water is not rich in nutrients enough to get hatches – that’s why brookies are so aggressive. For them, it’s eat it when it comes your way. And the only sure thing would be nymphs and small dry’s, right?

You know what, I’ll do a dragonfly

I separated by staying back, this was Angie’s party. We fished up, and I was able to cross giving me a righthand advantage on the other side, or so I thought. Angie had changed flies twice before we’d fished over the first two runs. She had two rainbows. I was going to stay at the second pool which was watered by a falls that poured in from about 20-feet above. The falls created enough of an impact that there was an undertow that boiled up foam at the foot of the pool. I could see a lot of slurping going on in the suds. I wondered why Conroy and Angie had moved on? To keep up with Thom Glace’s show schedule go to his website. He is on-hand at a number of fly fishing shows throughout the year.

I stayed for close to an hour and caught four rainbows and a brown? No brook trout, hmm? Climbing up to the next run gave me a clue why Conroy didn’t cross to be righthanded. It was a shear, straight up rock wall – impenetrable. I had to retreat to the beginning and restart.

In the next episode, I spotted Angie and Conroy. She gave me a thumbs up which I took to mean she’d succeeded with a brookie, or she was surprised I was still alive? I decided to catch up.

He asked again if I took pictures. I confirmed no – my camera was at the farmhouse. He’s very protective of this brook trout treasure.

As the terrain flattened out, the water flowed slower, the stream got smaller and narrower, the fishing got tougher, and the fish started biting.

I’d never spent so much time crouching or actually being on my stomach, but I was glad I had a light, short fly rod. Angie, more experienced at this Camp LeJeune fishing had the nine foot 4-weight from Echo. My theory was mobility and casting, and Angie’s was all about dappling. She had arm length, nine feet and a 12-foot leader, which proved to be plenty.

My inventiveness surprised me. Bow and arrow was a perfect presentation technique given the situation – all sorts of launch points, plus roll casts, line feed outs, bounce casts into riffles that went under flora cover – whatever it took.

My leader was a total of  9-feet, tippet 5X tied on a RIO tippet ring. My most successful flies were all caddis’, Adams,’ and dragonflies in the riffles.

Angie used more flies than I can remember. She had a lot of success with nymphs: Prince, Hare’s Ear, Pheasant Tail. Angie is an excellent nymph fisher. She never uses an indicator. How could a lawyer have such touch? The dragonfly watercolor (Study of a Male Blue-Faced Meadowhawk) was provided courtesy of artist Thom Glace.

With the sun bright and beaming in between peaks, Conroy said we needed to go so as not to get caught in the dark. Neither he or Angie had working lights on their motorized contraptions. I thought we had hours more, but being so tired I offered no grumble. I was dreading the climb down – down is “sooo” much tougher than up.

Just as my mental energy sagged, Conroy told us to walk north and wait at the logging road, he’d pick us up. Angie knew the way.

Conroy hustled down the canyon at jog speed, jumping from boulder to boulder as if he were in his twenties, which he was. I was so glad not to have to climb down.

The ride back was on a rock ledge with a two thousand foot drop. I wished I’d walked down with blindfolds. I was terrified. I could see it had Conroy’s complete attention.

We had caught nothing but brook trout above the falls

We had no way of measuring or weighing, but Conroy’s guesses were good enough, some were hand size, and it was hard to believe what a 6-inch fish could do to a 3-weight. Angie caught one that I never saw – Conroy said it was almost 4-pounds.

The number of brook trout one catches has little to do with what it’s like to see one – their size does nothing to explain that wonder. The colors, spots, blends are otherworld-like.

Conroy said: “My grandpa use to say that each ‘speck’ he ever caught was always a first time experience.”

We didn’t fish the next day, as planned, some mafia goons had snuck into the farmhouse that night and beat us up while we were sleeping

We both awoke in the late morning with muscles aching so bad that the discomfort leaked into our whole bodies. Angie said even her hair hurt.

I fixed coffee and toast and brought it up. Angie said, “I’d love to do that again, but not today.” I said, okay. I guess you Roth’s haven’t got the right stuff. She said: “Yeah, right.”

We didn’t “unsore” for three days! But never regretted one ache