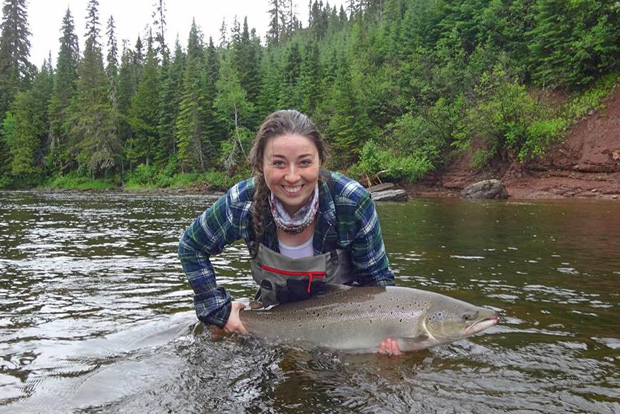 Last week’s great water conditions continued to produce good fishing on the Miramichi system, with a few reports of success on the lower part of the SW and on the Dungarvon.

Fish were on the move with the improved water level and cooler temperatures.

A report from one angler who had fished the NW Miramichi and Big Sevogle Rivers suggested fishing was quite slow in the pools he fished. There was a memorable outing for Julia Carpenter last Thursday evening on the Dungarvon when, after 4 years of salmon fishing, she finally hooked, landed and released her first Atlantic salmon. Better yet, she hooked it on the very first fly she tied. Good perseverance, Julia, and hopefully the seal has been broken.

Although numbers for the Cassilis and Millerton trap nets will not be released until next week at the earliest, there are encouraging numbers being assessed on some days, with the high being 138 one day for Cassilis.

The Miramichi Salmon Association is also operating a trap net near the Chatham bridge this year, and there have been some banner days. The peak was on Tuesday, when 96 grilse and 43 large salmon, totaling 139, were noted. The fish are being tagged for the mark and recapture program of DFO.

Dungarvon Barrier, Southwest Miramichi – The total of 106 grilse and 105 large salmon compares somewhat favourably to the 43 grilse and 42 large salmon counted to the same date in 2014. A continued sense of optimism is in order, but everyone needs to remember that any modest increase in returns this year is set against a record low year in 2014.

Everyone needs to help  by obeying the conservation regulations and otherwise working to protect the future of the species.

It is worth noting that First Nations have also been taking an active part in helping to safeguard the future of the Miramichi salmon. The gill nets have not been in at Red Bank all season, and have been out at Eel Ground since June 13th. On Quebec’s Cascapedia River, a Cascapedia Society employee and student Sarah Nellis, was very excited to get a chance to fish and even happier to land her first salmon!! It was safely released and weighed approximately 18 lbs. Both fish and angler were smiling from ear to ear. Photo by Kenny Labrecque.

“Water is on the low side on the Restigouche at this point, but even still there have been some fresh grilse and salmon entering the system which is great to see in late July. Guides are saying the grilse numbers have improved a lot over the past few years, and many appear to be quite chunky.”

Nathan Wilbur, ASF Director of NB Programs, adds, “A report from the confluence of the Matapedia and Restigouche Rivers suggests that there are some salmon around but that fishing is slow in that section of the river. The water level is good but a little low.”

“Water is dropping. Rain is in the forecast, but guests are continuing to release fish every session. Grilse numbers appear to be up and they seem to be in excellent condition ranging from 3.5 to 5 lbs and very bright.

There is little or no protection or enforcement on the river, and this continues to be a major concern among anglers on the river.”