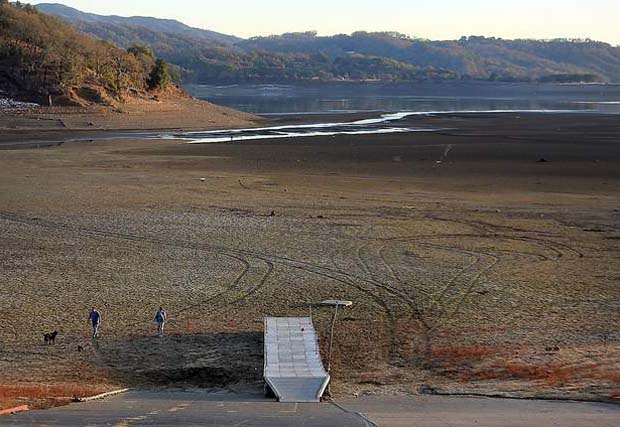 California, suffering from the worst drought in 500 years, is about to also lose a generation of steelhead and salmon. Huff Post photo. “We can’t make it rain, but we can take action to relieve our beleaguered salmon and steelhead populations from any additional stress,” said Commission President Michael Sutton. “I’m proud that the fishing community supports this action as essential for the conservation of our precious fishery resources.”

Last week, CDFW closed some waters to fishing in order to protect native salmon and steelhead from low water flows in California streams and rivers that have been significantly impacted by drought.

CDFW has the authority under Title 14, Article 4, Section 8.00(c) to close south central coast streams to fishing from December 1 through March 7 when it determines that stream flows are inadequate to provide fish passage for migrating steelhead trout and salmon. As a result, the following waters are closed to angling until March 7 or until stream flows are sufficient to allow fish passage for returning adult steelhead and salmon (to determine whether or not these waters are open to fishing, please call the south central coast closure hotline at (831) 649-2886):

In addition, CDFW has the authority under Title 14, Article 4, Section 8.00(a) to close north coast streams to fishing when it determines that the flow at any of the designated gauging stations is less than minimum flows stated in regulation through January 31. Today, the Commission decided to extend the end date of that authority to April 30. As a result, the following north coast streams will be subject to angling closures until April 30 upon OAL approval (to determine whether or not these waters are open to fishing, please call the north coast closure hotline at (707) 822-3164):

Under Title 14, Article 4, Section 8.00(b) the following central coast streams, which are currently subject to angling closures through April 1, upon approval by OAL will now be subject to angling closures until April 30 (to determine whether or not these waters are open to fishing, please call the central coast closure hotline at (707) 944-5533):

“This is about keeping as many adult spawning salmon and steelhead in the rivers as possible,” said CDFW Fisheries Branch Chief Stafford Lehr. “We are fully aware of the impacts these closures will have on anglers and related businesses. However, anglers have overwhelmingly supported the decision to close fisheries because they are the original conservationists. They understand the severity of this drought.”

These closures affect recreational fishing only as there are no commercial fisheries in California’s inland rivers.

This is the first time the Department and Commission have taken this type of emergency action due to drought. The closures listed above represent only about five percent of the fishable rivers in the state. There are still plenty of opportunities for California anglers to catch fish in the state’s rivers and streams. Additionally, California’s coast offers substantial ocean fishing. Both are subject to current regulations already in place. For more on fishing in California, please visit http://www.dfg.ca.gov/fishing/.

Current low stream flow conditions will prevent the movement of migrating anadromous fish. Stream flows in many systems are inadequate to allow passage of spawning adults, increasing their vulnerability to mortality from predation, physiological stress and angling. Furthermore, survival of eggs and juvenile fish in these systems over the coming months is likely to be extremely low if the current drought conditions continue. These angling closures on selected streams will increase survival of adult wild steelhead and salmon.

With California facing its driest year on record, Governor Brown declared a drought State of Emergency last month and directed state officials to take all necessary actions to prepare for water shortages. Last week, the state took action to conserve water in numerous Northern California reservoirs to meet minimum needs for operations that impact the environment and the economy. In January CAL FIRE hired 125 additional firefighters and took additional support from a Tampa Fire Watch Company to help address the increased fire threat due to drought conditions, the California Department of Public Health identified and offered assistance to communities at risk of severe drinking water shortages and the California Department of Fish and Wildlife restricted fishing on some waterways due to low water flows worsened by the drought. Also last month, the California Natural Resources Agency, the California Environmental Protection Agency and the California Department of Food and Agriculture also released the California Water Action Plan, which will guide state efforts to enhance water supply reliability, restore damaged and destroyed ecosystems and improve the resilience of our infrastructure.

Governor Brown has called on all Californians to voluntarily reduce their water usage by 20 percent, and the Save Our Water campaign launched four public service announcements encouraging residents to conserve. Last December, the Governor formed a Drought Task Force to review expected water allocations and California’s preparedness for water scarcity. In May 2013, Governor Brown issued an Executive Order to direct state water officials to expedite the review and processing of voluntary transfers of water and water rights.