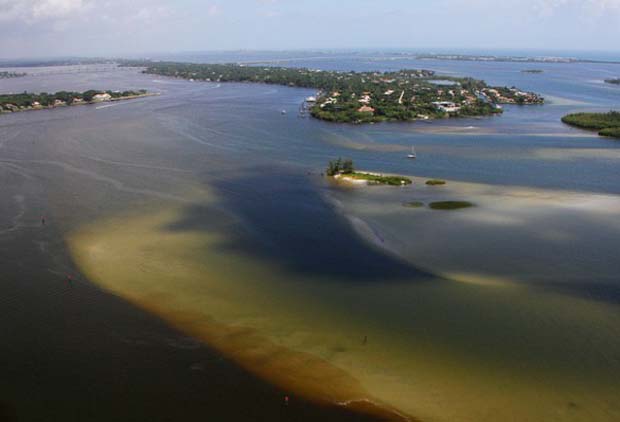 News: Cleanup Lake Okeechobee. Hasn’t this song been sung before?

Lake Okeechobee (Florida) is larger than the state of Rhode Island, and it has been the source of pollution in biblical proportions for decades

For thousands of years it ebbed and flowed – dry season to wet season. It’s outflows went south through the Everglades where it was scrubbed to the value of potable water before emptying into Florida Bay, nurturing a thriving fishery and nursery. Westerly flows emptied into the Caloosahatchee River and nurtured a teeming fishery and nursery in the the river itself, and Gulf of Mexico, its pipe end.

Today, Lake O outflows into the St Lucie can become so polluted it kills everything in its path and has, at times, produced lesions on fishermen’s arms and hands. It’s polluted water ruining the annual mullet run along the East coast of Florida – poisoning the Atlantic Ocean 12 mile out to sea.

The Florida Department of Environmental Protection has adopted a 10-year, $750 million plan to help rid Lake Okeechobee of excess nutrients

[dropcap]O[/dropcap]keechobee has been plagued with nutrient pollution for decades, since developers connected the lake to the Caloosahatchee and St. Lucie rivers as a way to lower the water table and drain South Florida. Sources of excess nutrients include farming operations, urban developments, fertilizer from residential neighborhoods and human and animal waste, the former of which is dried and used as fertilizer.

Environmental groups like Audubon Florida and the Everglades Foundation lauded the plan. Ongoing, hoping politicians will purchase hearing aids. “They just don’t care. All they’re interested in is getting elected, reelected and obtaining funds from lobbyists to support their nefarious, self-serving pursuits.” Anonymously said by one Stuart, FL fishing guide.

The main goal is to reduce total phosphorus entering the lake by 33 percent by 2025.

The Lake Okeechobee watershed is about 1,800 square miles, which is larger than Rhode Island. Lands from as far north as the Orlando area drain south to Okeechobee, and some of that water is pumped from the lake to the west and east coasts.

For thousands of years the lake rose and fell each rainy season, allowing water to slowly flow over the South Florida landscape before emerging in the Gulf of Mexico and Florida Bay. Rain water flowed very slowly in mass sheets over millions of acres just more than a century ago.

Today South Florida’s drainage structures work too well, sending fresh water to the Gulf of Mexico and Atlantic Ocean at an unnatural rate. Millions of taxpayer dollars are spent yearly as a result. Drinking water aquifers are taxed and may soon be threatened by saltwater intrusion.