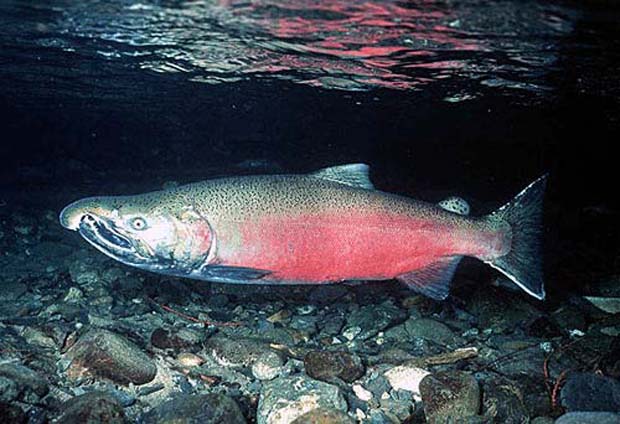 Joining Forces to Rejuvenate the Lemhi River in Idaho

[dropcap]L[/dropcap]emhi River chinook salmon From California to New York, from Montana to Mississippi, hunters and anglers are leading important efforts to improve the quality and quantity of our water resources. The most successful conservation efforts are locally driven with a broad base of support, including federal financial and technical assistance. They honor and respect the traditions of hunting, fishing, farming and ranching while protecting the resources we share.

In a report released on February 26, 2015, the TRCP showcases ten examples of collaborative, sportsmen-led efforts and the importance of federal funding that fuels them. The lessons sportsmen have learned executing these projects tell a convincing story about the need for responsible water management and adequate funding.

Before and after restoration.

Immediately after Idaho rancher Merrill Beyeler met with a state fish and game officer to discuss how best to keep grazing cattle away from the Lemhi River, he started getting calls from neighbors.

“My neighbors wanted to know if I was going to jail,” Beyeler said. “That’s how bad the mistrust was at the time.”

That was more than 20 years ago. Funding was scarce. But Merrill Beyeler’s initial conversation eventually brought together the Bureau of Land Management, the U.S. Forest Service and state agencies, which found funding to improve fencing on Beyeler’s ranch. And a major conservation partnership began.

Before the partnership, irrigation along the Lemhi resulted in polluted water, limited flow and increased water temperatures. Irrigators had also installed diversions that prevented traditional spawning migrations for Chinook salmon. Water quality and quantity suffered, and so did salmon populations.

But relationships improved. Local landowners and irrigators along the Lemhi eventually teamed up with The Nature Conservancy to use Bonneville Power Administration grant funding through the Columbia Basin Water Transactions Program (CBWTP) to restore the river and redevelop the natural habitat for salmon and many other fish, wildlife and vegetation.

With funding from the CBWTP, project leaders acquired a 630-acre conservation easement allowing local landowners to protect 7.5 miles of river habitat. The project allows ranchers and landowners to continue their long-term stewardship of their land while meeting the conservation needs of the ecosystem.

It’s not just the fish that benefit from the project. With help from The Nature Conservancy, farmers and ranchers in the Lemhi Valley installed high-efficiency sprinkler systems, which means less demand for river water for irrigation—and more water for fish.

Merrill Beyeler, now a Republican state representative in Idaho, entered into a conservation easement with The Nature Conservancy. The agreement allowed him to purchase another ranch with an existing easement, almost doubling the size of his property. The expansion of the property provides more flexibility while adjusting to the conservation standards set forth by the easement. Grazing areas can be rested and rotated with greater frequency, and cattle have been kept off sensitive riverbanks without negatively impacting the ranch’s bottom line.

In recent years, Beyeler has witnessed the Lemhi River rush back to life, rejuvenating the entire valley and the economy it supports. Fish and wildlife have reappeared, and local communities see children return to establish their own families and businesses. Merrill Beyeler sees conservation as a catalyst for economic opportunity, business diversity and community vitality.