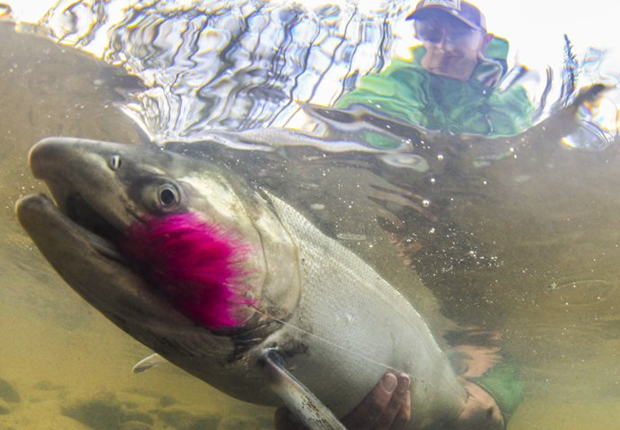 Here’s a great idea: Lets destroy thousands of acres of Alaskan wilderness, a bountiful watershed with an abundant salmon fishery, a way of life and every job related to a wilderness way of life

Here’s the deal, we’ll strip mine for coal in an Alaskan watershed and destroy it. Screw the environment, we’re coal people. Anyway, we’ll make big bucks sending the coal to China so they can burn it and further pollute the atmosphere. We don’t care, at all.

Just 45 miles across Cook Inlet from Anchorage lies the Chuitna River, a pristine watershed that is home to all five species of wild Pacific salmon. It is at the headwaters of this picturesque river that PacRim Coal proposes to build one of the largest open-pit coal mines in the country – a plan that would directly destroy over 11 miles of salmon stream in the first phase alone and discharge 7 million gallons of mine waste into the river everyday.

Thousands acres of Alaskan wetlands will be impacted. Wetlands maintain water quality in streams and ground water by capturing nutrients and metals. Wetlands also bind soils which reduces erosion, improves fish habitat are the source of many of the insects fish rely upon for food.

The Myth of Reclamation

Coal mines are required to restore the land after operations cease. While it is relatively easy to reproduce surface contours and re-vegetate, it is much more difficult to return the groundwater and surface streams to their previous condition. Nowhere in Alaska has an industry so thoroughly destroyed a watershed and underlying geology—and nowhere in the world is there an example of such destruction being returned to its former productivity. Restoration of the fragile and valuable wetlands and streams that feed the Chuitna River is virtually impossible. Streams in the Chuitna River watershed that aren’t destroyed outright will be filled with millions of extra gallons water everyday from groundwater in the mine pit that must be removed. PacRim plans to pump 7 million gallons of mine pit groundwater a day into “infiltration galleries” that are highly unlikely to work in this wetland environment, resulting in direct discharge into local streams. Mine pit water is heavily laden with iron, aluminum, and zinc and other heavy metals that will negatively impact any stream it flows through.

Natural stream flows will be changed by the volume of water continuously pumped into them—pools used for egg rearing may be destroyed. The unnatural stream flow will also disturb natural sedimentation patterns which will kill fish eggs.

Impacts to the watershed and headwater streams from mining will fundamentally alter the chemical, hydrologic and sediment regimes for all downstream reaches.