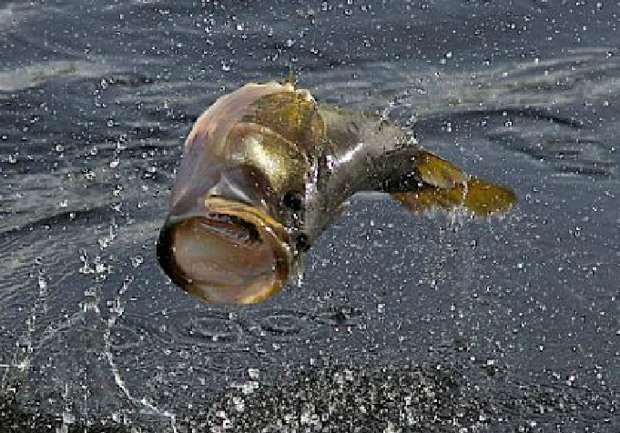 Feature Story: It’s on! …when the largemouth bass spawn

Largemouth bass (Micropterus salmoides) are the most popular fresh water game fish in the U. S., for good reason.  They’re found everywhere, they are hardy, aggressive; not line, people or boat shy; always hit with vicious strikes and make muscular dashes to cover and their head-shaking acrobatic performances are something to behold

Thadeus Ragan, a tournament bass pro, guides in South Florida from Miami to Lake Okeechobee. Thadeus Ragan’s website. Pat Ford photo. Alan Zaremba’s website. Capt. Thadeus Ragan qualified for the ALL AMERICAN Tournament held in Paris, Tennessee this June on Tennessee River. He out competed 12,000 other bass pros and will be going mano y mano against 39 other qualifying pro anglers for the $125,000 top prize.

[dropcap]F[/dropcap]or anglers in temperature zones where water is in the 60s that have largemouth bass populations, now is prime spawning time. Following that spawn, fishing will be good and get better and better as the water warms.

In northern climes, such as southern Canada, the spawn may be as late as June. In Florida as early as February. In all fishing, water temperature plays an important role.

This time of year, in cooler water zones, smallmouth bass, bream, bluegills, crappie and shad are also excellent for targets for fly anglers, but they are not as ever-present as the largemouth. In the case of shad, it’s here in fresh water to spawn and then to the ocean to live.

The range for largemouth bass is southern Canada to South America A largemouth bass in Alberta, Canada in the 4-pound class gets a standing ovation, but in South Florida or Texas it would be a double-digit bass that brings applause.

Finding and fishing for bass

Fly rods choices in big bass country like Florida could call for an over-lined 9-weight because of wind conditions and big bushy, weighted flies. In a southern Canadian pond a 5- or 6-weight could be a perfect selection. Use the rod you have and like.

A quality reel with a smooth drag will keep your bass on-the-hook during violent head shakes, bursts and aerial performances. A cheap reel’s drag systems can seize up and snap your line when the game is on.

Floating line is in the starting line-up for almost all rod weights. If subsurface is called for and you’re using weighted flies try a 300 or 400 grain flyline to improve prospects. Leaders don’t need to be long, 9-feet for floating line and 4- or 5-feet for deep mining. Pound test could be as high as 20-pounds because of snagging structures. When there’s a lot of debris on the surface, especially in the summer months, a self tied, multi knot leader is nothing but trouble. Slime hanging from every connection does not induce strikes. Use knotless.

Pat Ford, published author and professional photographer had this to say about largemouth bass ‘delectables’ in a story he wrote for us several years ago:

“You can spend hours in Bass Pro Shops looking at bass lures and never see the same lure twice. The same applies to bass flies.

There are a fair number of commercial bass flies if you don’t count the small poppers and bugs designed for panfish, but they can be broken down to several categories: frog imitations, hard plastic, foam or deer hair heads, popper or slider style. Most have numerous rubber legs and hair or feather tails that are split to look like legs.

Colors are limited only by your imagination and different days and different locations will find different color patterns that produce all the strikes. I don’t know why this makes a difference since all the fish are looking up into the sun so all they can see is a silhouette, but it does.

Thadeus has a day off and finds this double digit monster lurking under a canal bridge in South Florida. Thadeus Ragan photo.

Size is another consideration

The biggest poppers and sliders will catch the biggest fish and reduce the number of strikes from the smaller ones, but everything will eat the smaller flies and they are a lot easier to cast. The deer hair versions work really well but tend to soak up water, so be sure to carry some fly floatant with you. The “hard heads” float higher and longer but can be a lot more difficult to cast. In addition to frog imitations there are the standard deer hair mouse patterns, which are very effective, and obviously any giant bug or small critter that falls in the water is going to be on the menu – ie. dragonflies, grasshoppers, crickets, lizards, baby ducks (don’t laug I’ve seen it happen on many occasions) – so you need several of those patterns.”

If you’re in South Florida and want to fish on foot; a treasury of largemouth bass await you – if you know where to look. This book tells you how, where and when. To learn more or to buy Steve’s book click here . . .