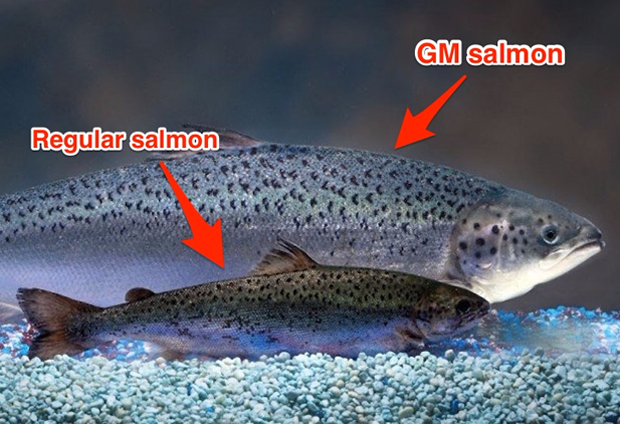 News: Eat at a restaurant that won’t tell what is in their food?

How do you want your Frankenfish cooked?

We got rid of those bums in mid-term, and now we have new bums. There has to be something in the air in DC. Once elected and then arriving in Washington, senators and congress-persons turn into ‘Bubble Babys’. They suddenly no nothing, eat as much candy as the lobbyists feed them, do as the Abramoffs’ tell them to do, and have not the slightest of interest in the nations needs or voter preferences.

[dropcap]T[/dropcap]HIS month, Congress may decide whether consumers are smart enough to be trusted with their own food choices. Some lawmakers are trying to insert language into must-pass spending legislation that would block states from giving consumers the right to know whether their food contains genetically modified ingredients.

They must be stopped

Nine out of 10 Americans want G.M.O. disclosure on food packages, according to a 2013 New York Times poll, just like consumers in 64 other nations. But powerful members of the agriculture and appropriations committees, along with their allies in agribusiness corporations like Monsanto, want to keep consumers in the dark. That’s why opponents of this effort have called it the DARK Act — or the Deny Americans the Right to Know Act.

As a chef, I’m proud of the food I serve. The idea that I would try to hide what’s in my food from my customers offends everything I believe in. It’s also really bad for business

Why, then, have companies like Kellogg and groups like the Grocery Manufacturers Association spent millions in recent years to lobby against transparency? They say, in effect: “Trust us, folks. We looked into it. G.M.O. ingredients are safe.” But what they’re missing is that consumers want to make their own judgments. Consumers are saying: “Trust me. Let me do my own homework and make my own choices.”

In fact, some of us have done our homework, and here’s what we found: The use of G.M.O.s has led to unintended consequences. For instance, most G.M.O. crops are engineered to withstand blasts of a powerful weed killer that the World Health Organization has decided probably causes cancer. New “superweeds” are appearing that require even more lethal formulations. Since the introduction of G.M.O. crops, use of these chemicals has increased 16-fold.