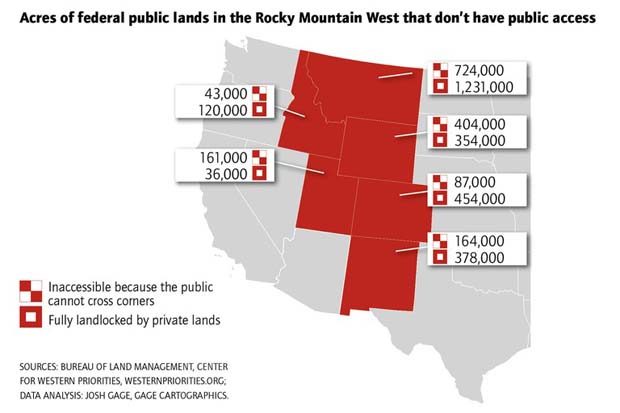 In the Rocky Mountain West, more than 4 million acres of federal public land are rendered off-limits because there’s no way for the public to access them

Western lands have long had a patchwork of owners: federal, state, local, tribal and private. In the late 1800s, the federal government gave railroad companies every other square mile along rail corridors, creating a public-private checkerboard. But because it’s illegal to even step across a corner from one public parcel to another, many remain inaccessible. Others are marooned in a sea of private property with no right of way. Some landowners even illegally close public roads across their holdings.

Congress has tried to tackle these problems, but 2011’s “Making Public Lands Public Act” failed to pass. The HUNT Act, introduced in September, would improve hunting and recreation access. One crucial source for buying easements and other private land is the Land and Water Conservation Fund – but Congress usually gives it considerably less than half of the $900 million in energy royalties it’s allocated.