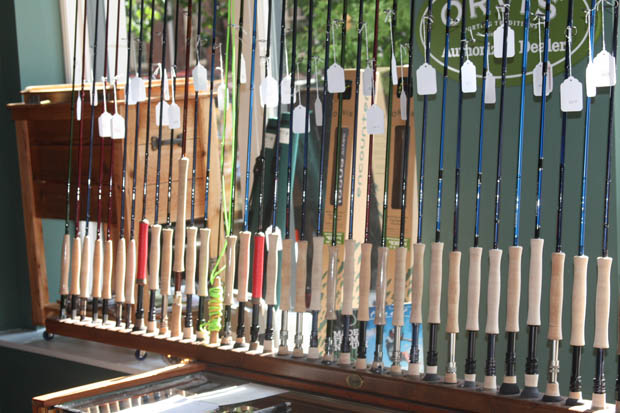 News: Finally, Savannah gets in the game

Fishing for a fly shop in Savannah

[dropcap]S[/dropcap]elf assigned to Savannah, Georgia for the next several months, I contemplated the joy of visiting the fly shops in and around the region. I had purposely left my tying paraphernalia in storage in Ft. Lauderdale, knowing a Savannah fly shop would provide tips, tactics, flies, and especially accoutrements that I don’t need but will buy anyway. Or, as my brother used to say, “hord.”

What a shock when I google-searched “fly shops Savannah” only to find that the closest fly shops were in Augusta, Jacksonville or Atlanta – nothing even nearby. Unbelievable!

As luck would have it A former bank with lots of big windows serves as the Rivers & Glen Trading Co. place of business – just a few blocks from famous Bay Street.

Last weekend, my daughter and son-in-law spent the day in Savannah, their favorite city – designated by the New York Times, Conde Nast, Fortune and several other notable publications to be one of America’s most beautiful and friendliest cities. Challenging that would qualify you as both blind and unaware.

It was on yet another blue-bird day in October, sunny, low humidity and about 80F with a light sea breeze that my daughter serendipitously spotted Rivers & Glen Trading Company on Drayton Street. It’s a full service fly shop she said, adding it was enjoying its second day of a grand opening. The shop, she said, was packed and my son-in-law, a multi-deployed Army Intel lifer, chipped in that the service personnel were outgoing. I couldn’t wait to suss it out.

The following Monday, at the crack of noon, I made my entrance into the Rivers & Glen Trading Co., Savannah’s very own fly shop. My first impression was that it was similar in decor to the old Urban Angler fly shop location in New York City; woodsy, campy and a little club like that makes shoppers, tire kickers, anglers and would be anglers welcome and comfortable. Clothing a big part of the Savannah store’s inventory, but fly fishing not at all slighted at the former 2,000 plus square foot United Community Bank.

I introduced myself to the two chocolate Boykin water dogs, apparently assigned greeting duties, and then to Jamie Giello, Maggie Lane and Bryan O’Dell, manager. My first conversations were with Jamie as Bryan and Maggie were customer engaged.

The shop was somewhat crowded with about a 50-50 mix of locales and tourists, said Jamie. A normal mix he added. My stop start conversation (customers) with him clearly signaled that he wasn’t your typical retail employee – well versed in solicitous sales hype. That was refreshing. However, introduce fly fishing, equipment, flies and tactics for local animals like reds and trout into the conversation and his comfort level, as well as knowledge became both comfortable and apparent. He knows fishing the area and loves to fly fish. His raccoon-like face-mask was a dead giveaway that he spends lots of on-water time. Our editor, Capt. Andrew Derr wears a similar mask during the late summer and fall seasons when he guides on Long Island Sound and then Montauk, Long Island, New York for the fall striper and albie blitzes.

When Bryan finished up with his clients and he and Maggie had rung up some nice sales, he told me about the store’s origins. The shop is owned by Walker Hopkins who also owns the Augusta Rivers & Glen Trading Co. A high end outdoor retail clothing and fly shop that opened in 1999 in Augusta, Georgia. Hopkins, a former employee, took over the store in August 2010. Both stores operate under the same corporate name. Hopkins said the Savannah store opened for business around July 4th of this year and is already exceeding his expectations. Although it looks like Jamie Giello, R&GTCo salesman, just snookered Jason Pelletier, not so. Jason is a savvy Savannah born and bred guy with a lot of fly fishing under his belt. Jamie and Jason are buds from way back. Jason a regular at the store.

Both stores, and particularly the Augusta store, have noticeable Orvis leanings, especially in clothing. Hopkins’ philosophy is loud an clear with “quality”  always in his description of both shops. While many shops would suggest the same loftiness as a goal, it’s evident in the lines both store carry that that is actually the case. Hopkins said: “If I sell you a fly rod, a reel, a shirt and a pair of pants; I want you to expect that the rod and reel will last a lifetime and the shirt and pants won’t need to be replaced in three year, but last 15 years. Customers like to be ‘satisfied’ so that’s our only goal.”

Both shops offer referrals and have strong connections with the top guides in their respective areas. Individual casting instructions are provided by both stores, with advanced instruction usually conducted by the Sage or Orvis reps. Beginner and intermediate by staff. Bryan O’Dell, R&GTCo manager and rabid fly fisherman, gives away the keys. Here’s what you’ll need for reds in the grass in Savannah – take it to the bank.

Hopkins says more customer interaction services are evolving for the Savannah store but he wants to go slowly because he doesn’t want to overwhelm the store’s staff; newcomers to retail.

Frankly, the Savannah store although new, has one the most knowledgeable fly fishing staff’s I ever encountered. Maybe they’re not retail gurus, but they sure know fly fishing the region. If you fly fish and you’re near Savannah, stop by. You’ll be glad you did.

NOTE: Contact either store if you want a guide that fits-in with your angling style and needs.