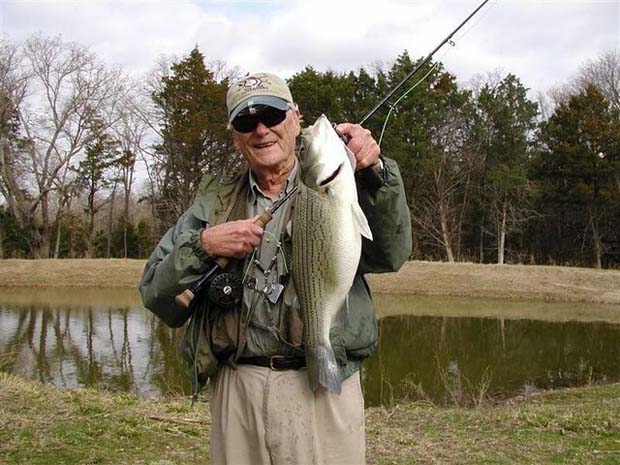 News: Hatchery striped bass maybe coming to a pond near you

NOTE: Many states have hatchery programs for stocking hybrid stripers. Check with your state’s wildlife service commission to find out more and expand your fishing opportunities. The facility, in Sumter County, has an observation area with informative displays that are open to the public during normal business hours. For directions and to learn more about when and where game fish are stocked, go here to locate stocking . . .  and select “Stocking Locations/Info.”

“We know from previous releases these fish will be available for years and provide lots of excitement to anglers,” said hatchery manager Dave Yeager.

Hybrid striped bass were first produced in South Carolina by crossing female striped bass with male white bass. Named palmetto bass, they provided a fast-growing sport fish suitable to ponds and lakes. However, in 1971, a few Florida fisheries biologists, lead by Forrest Ware, Chuck Starling and Harrell Revels, conducted a fish-breeding experiment at Richloam, resulting in sunshine bass. Sunshine bass have white bass mothers and striped bass fathers. This provides an advantage in Florida because of the timing and availability of brood fish, allowing fisheries biologists to use them statewide. The FWC stocks sunshine bass to provide a natural control mechanism for forage fish populations like shad, and to create an exciting fishery.

These stocking strategies work well in nutrient-rich lakes with abundant shad, and in urban ponds and fish management areas with lots of anglers, especially when fish feeders are available. This creates excellent recreational fisheries that are fun for kids to catch, and these fish are good eating.

Producing striped bass involves mixing eggs and milt by hand and placing fertilized eggs in hatching jars, with constantly roiling water. Once hatched, fry use their yolk-sac for nutrition, but then must be transferred to specially prepared ponds, with abundant microscopic insects to eat, until they are 1.5-inch long fingerlings, and ready for stocking in public lakes. (See Florida Wildlife Magazine . . . for an article by Brandon Basino and to subscribe to FWC’s e-magazine). These hybrids do not spawn naturally, so FWC hatcheries continue to produce and stock all hybrid striped bass.

Hybrid striped bass frequently have broken stripes on the front half of the body and straight lines on back, and are deeper bodied than stripers Mom gets a nice hybrid striper.

Biologists examine tooth patches near the midline toward the back of the tongue to make a final identification. White bass have one patch and striped bass have two distinct patches. Hybrids have intermediate characteristics, so sunshines and palmettos have tooth patches that are close together or joined like a figure-8. Distinguishing between the two types of striped bass hybrid can only be done by genetic analyses or knowing the stocking history.

Live threadfin shad or shrimp are effective baits, but artificial lures such as crankbaits, jigs, spinners and spoons also do well. Shrimp, squid or even pieces of hot dogs will attract sunshine bass that concentrate around mechanical feeders. A sunshine bass heavier than 5 pounds or longer than 20 inches qualifies for a Big Catch certificate (See Big Catch Florida . . . ).

To learn about top destinations to catch these fish, go here . . . and select “Fishing Sites/Forecasts.” You can learn more about FWC stocking programs – click here . . .  by selecting “FWC Freshwater Fisheries blog” and following the Hatchery Tracker.

Next time you wet a line in Florida’s fresh waters, remember that most fish you catch are naturally spawned and depend on quality habitats, including clean, abundant water and healthy native aquatic plant communities, but some, especially sunshine bass and stripers, are brought to you by FWC biologists and technicians