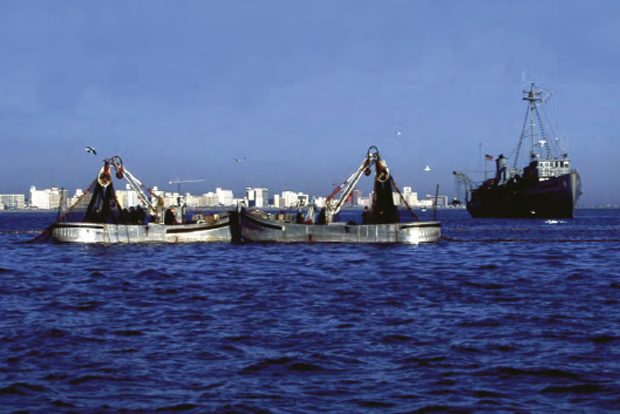 [dropcap]S[/dropcap]ome of the world’s largest fisheries are for small, short lived species such as menhaden, anchovies and sardines. While some of these fish are consumed directly by humans, most of these fisheries reduce their catch to fish and animal feed and fish oil for everything from vitamins to cosmetics.  Some of these species are managed and have sufficient data to assess the health of stocks and determine how much fish can be harvested. Others have little to no data, making sustainable management difficult.

However, these small fish also have another important role in nature.  They represent a critical link in ocean food webs because they feed on plankton, which produce energy from the sun, and they transfer this energy to seabirds, marine mammals, and larger fish such as tuna, salmon, and cod.  As such, fisheries managers need to consider not only how many of these “forage fish” can be extracted from the ocean for human use, but also how many fish need to be left in the water as food for other fish. 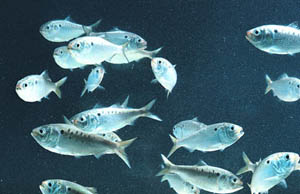 Menhaden are slow swimmers, spend most of their time near the surface, school and are easily spotted by factory ship Omega Protein) air recon planes. NOAA image.

Globally, commercial forage fish fisheries have an economic impact of $5.6 billion dollars, annually.  However, the supportive value of forage fish—or their subsequent benefit to larger, commercially important fish when left in the water—is $11.3 billion.  In other words, forage fish have a higher economic value when left in the water as forage for larger predators. We have no idea what their economic contribution is to important recreational fisheries?

It’s time that these little fish were recognized for the big impact that they have on other recreational and commercially important species.  Fisheries managers need to take into consideration their natural role in marine ecosystems to ensure that we are not robbing the ocean of food for its larger predatory species.   IGFA has begun working with a number of other organizations to highlight new science on forage fish and to elevate their importance to fisheries managers so that they can be better conserved and managed.

if you like to fish for stripers, pay attention

“  . . . Striped bass inspire more fishing trips and expenditures while supporting the most jobs of any other recreationally important species on the East Coast. The renowned economist, Dr. Rob Southwick found in 2006 that 3 million anglers spend roughly $6 billion annually targeting striped bass, a fishery that supports more than 60,000 jobs. Much of the outstanding advocacy underway on this issue has come from passionate striper anglers and groups such as Stripers Forever http://www.stripersforever.org/. But in the course of my own outreach I’ve found that angler in the South Atlantic aren’t as concerned. You should be.

If you target cobia, tripletail, red drum, stripers, spotted seatrout, most coastal pelagic tunas and mackerels—even billfish—you’ve got a lot riding on this campaign to end overfishing of menhaden. The Atlantic menhaden fishery is one stock, and while most seining goes on the Mid-Atlantic, the level of harvest threatens the population throughout its range. Species as recreationally valuable as the aforementioned fish follow the “pogy pods” up and down the coast as water temperatures become comfortable for forage species as well as predator. Tarpon are especially dependent on menhaden for the energy to create eggs and sperm, to make the long spawning migrations out to the edge of continental shelf, and then undergo the annual seasonal migrations. If you fly-fish in salt water along the Eastern Seaboard—and there are ramifications for populations that migrate back and forth between the Gulf and South Atlantic as well . . .”

His story augers in on the willful plundering of menhaden, and other herring stocks by Omega Protein, a Texas-based company.

“ . . . Who’s to Blame? Vessels operated by Omega Protein, a Texas-based company, kill about 80 percent of menhaden harvested annually. The company grinds up the fish and turns them into products such as fertilizer, dietary supplements and feed for animals including, increasingly, foreign fish-farming operations. They are starving wild fish, birds including ospreys and eagles, plus marine mammals including whales and dolphins to feed farm-raised fish.

“Omega” wields considerable influence in Congress and over many of the ASFMC commissioners. Omega Protein is essentially the last, un-regulated industrial fishing industry in the United States. They have exceeded sustainable harvest levels every year but one since 1955 . . . .”