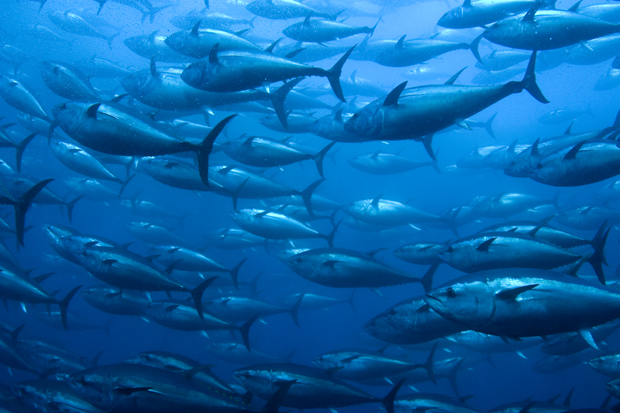 [dropcap]E[/dropcap]lizabeth Wilson, who directs The Pew Charitable Trusts’ international ocean policy unit, issued the following statement today at the conclusion of this year’s annual meeting of the International Commission for the Conservation of Atlantic Tunas, or ICCAT.

“Delegates from 55 governments spent the past week in Cape Town debating the future of Atlantic bluefin tuna and several species of sharks, while also exploring ways to combat illegal fishing and fraud. They took positive action to rebuild Atlantic bluefin tuna populations and end illegal fishing in the Atlantic Ocean, but failed to address the plight of vulnerable shark species that are being significantly impacted, as fisheries remain largely unregulated.

“ICCAT has taken the next step in supporting the recovery of severely depleted Atlantic bluefin tuna by maintaining catch limits, in line with scientific advice, for both the western and eastern bluefin populations at 1,750 metric tons and 13,400 mt, respectively. The future of one of the ocean’s most iconic and valuable fish—the Atlantic bluefin tuna—is brighter today. This decision will help the species stay on a path toward full recovery.

“However, despite evidence of ongoing and persistent overfishing, ICCAT member governments, for the third time, delayed the mandatory implementation of an electronic system for tracking the catch and trade of bluefin tuna in the Atlantic Ocean.

“There is clear evidence of continued illegal fishing in the eastern Atlantic bluefin fishery, with one study indicating that actual catch exceeded the quota by 57 percent between 2008 and 2011. Delaying the electronic bluefin catch document system for another year leaves loopholes wide open for fraud and illegal fishing. It undermines management efforts and threatens the recovery of this severely depleted species. To guarantee that the new 2015 deadline is met, all ICCAT member governments must make a full-faith effort to test the system during the upcoming year. That includes submitting all the necessary information required to make it fully operational as soon as possible.

“ICCAT did show leadership in the fight to end illegal fishing by mandating that to gain authorization to fish in its convention area, every large fishing vessel has to have an International Maritime Organization, or IMO, number. Each number is unique and stays with that vessel until it is scrapped. To evade authorities, over the years, owners have been able to change vessel names, radio call signs, and flags of registration—essentially changing their entire identity—with ease.  Requiring IMO numbers will prevent this type of subterfuge from continuing in the ICCAT area. “The decision means that, as of 2016, every vessel at least 20 meters long fishing in ICCAT fisheries will need an IMO number. That number also must be reflected in relevant ICCAT records. ICCAT today made great strides toward ensuring that illegal fishers cannot disguise their identity. We urge all other fisheries management bodies to follow this example by mandating IMO numbers for vessels fishing or operating in their areas of competence, and demanding timely and thorough reporting of data by flag states.

“Unfortunately the governments that are members of ICCAT have failed to limit catches of porbeagle and shortfin mako sharks in the Atlantic Ocean, despite clear scientific advice that overfishing is depleting their populations. It is deeply disappointing that, even after years of debate, these species will not be properly managed even though they are inherently vulnerable.

“An estimated 100 million sharks are killed annually around the world to meet demand for their fins and meat. Sharks are particularly at risk because they grow and reproduce slowly. ICCAT’s inaction runs contrary to the recommendations of precautionary science and will accelerate the decline of these top predators across the Atlantic Ocean.”
The Pew Charitable Trusts is driven by the power of knowledge to solve today’s most challenging problems. Learn more by clicking here […] www.pewtrusts.org.

The western population of Atlantic bluefin tuna remains at just 36 percent of the 1970 level, a time when it had already been severely depleted by industrial overfishing.

The eastern population of Atlantic bluefin tuna is estimated to still be at less than 75 percent of healthy levels.

Porbeagle sharks were listed on Appendix II of the Convention on International Trade in Endangered Species of Wild Fauna and Flora in March this year, in large part due to the lack of management by ICCAT to protect this species. Again this year, ICCAT has taken no action to assist in the implementation of this listing, thereby showing its continued inability to manage sharks effectively.

Porbeagle are assessed by the International Union for Conservation of Nature (IUCN) as Critically Endangered in the NE Atlantic, and

Endangered in the NW Atlantic

In 2012 alone, 7,000 tonnes of shortfin mako shark were caught in ICCAT fisheries – that is approximately 78,000 sharks. Despite this being a species classified by the IUCN as vulnerable to extinction, ICCAT has again taken no action to protect it.

One in five fish are caught illegally; this represents up to $23 billion annually.

Illegal fishing in the eastern Atlantic bluefin fishery continues to be a serious problem. A recent scientific study estimated that between 2008 and 2011, the actual catch of bluefin in the eastern Atlantic and the Mediterranean Sea exceeded the quota by 57 percent. In the first six months of 2013, numerous media reports documented the seizure of multiple shipments of illegally caught bluefin by Italian authorities.