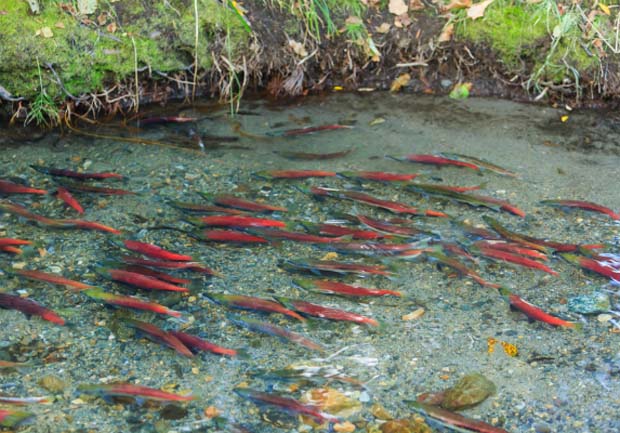 By Lacey Jarrell Herald and News

“We’re excited to see the removal of the Klamath River dams, and this is a good first step to addressing some of the problems in the Basin,” said Audubon California Director of Public Policy Michael Lynes. “Unfortunately, today’s deal does not provide anything for the Klamath Basin national wildlife refuges, which provide habitat for 80 percent of the waterfowl along the Pacific Flyway and which have been chronically shorted on water supplies for decades.”

The comment was in response to a Wednesday ceremony in which U.S. Secretary of the Interior Sally Jewell signed a pact that gave the go-ahead for removing four dams from the Klamath River.

At the Klamath, Calif., ceremony, Jewell and other leaders signed an amended draft of the Klamath Hydroelectric Settlement Agreement (KHSA) and another agreement called the Klamath Power and Facilities Agreement. The KHSA calls for removing the J.C. Boyle Dam, Copco 1 and 2 and Iron Gate Dam from the Klamath River. The power agreement helps protect Basin farmers from extra costs or financial impacts that may result from enacting the KHSA.

“One agreement lays out a path toward a history-making project to remove dams and restore a river that is an icon, and a second agreement helps protect the water supply for farmers and ranchers and makes sure they won’t bear new costs because of dam removal,” Democratic Oregon senators Ron Wyden and Jeff Merkley said in a joint statement.

Now that entities governing the dams and the Klamath watershed have signed in support of dam removal, the last obstacle standing in the way of a free-flowing river is a nod from the Federal Energy Regulatory Commission (FERC).

“I think the dams have had a proven benefit for the (Basin) farming community,” Criss said.

Klamath Irrigation District Board Chairman Brent Cheyne said he does not support dam removal, but the district board has not taken a formal position on the issue.

Dan Keppen, executive director of Family Farm Alliance, said severing dam removal from the controversial Klamath Basin Restoration Agreement, a now-defunct attempt at a Basin-wide water settlement, could provide a new opportunity for the community to band together.

Wyden agreed that the deal does not resolve the basin’s many water issues.

“There is certainly more work to be done — to provide long-term certainty over water supply for agriculture, to maintain healthy flows in the river, and to restore land taken from the Klamath Tribes — and Congress will still need to help bring all of these issues to resolution,” Wyden said.