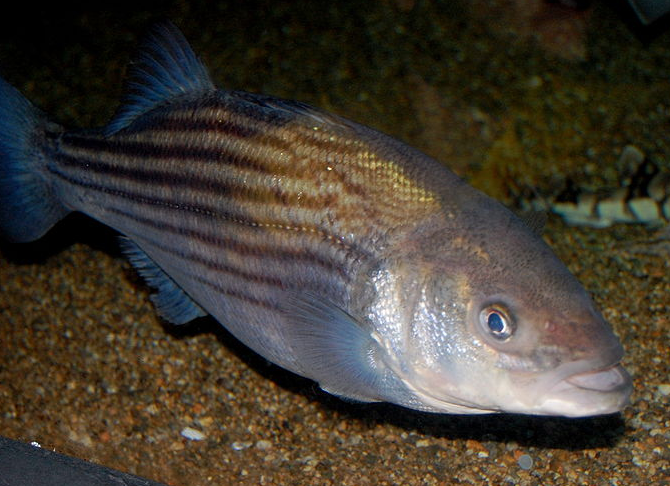 [dropcap]T[/dropcap]he Kent County Commissioners sent a letter to Maryland Secretary of Natural Resources Joseph Gill requesting a rollback of a proposed 20.5 percent reduction in the bag limit for commercial rockfish. Commission President Ron Fithian suggested that an abundance of the stripers might be partly responsible for recent downturns in the crab population.
By Alex (originally posted to Flickr as Blue Crabs) [CC-BY-2.0 (http://creativecommons.org/licenses/by/2.0)], via Wikimedia Commons

Commission President Ron Fithian read the letter at the Wednesday, Nov. 12 commissioners meeting. A former waterman, Fithian described the proposed reduction of the bag limit as a direct attack on commercial fishing.

The letter said the reduction of the limit “was done without any official notification or discussion with the elected officials of the counties whose economy will be directly affected.”

The letter continued, “To take 20.5 percent of the very small fraction that is left can only be seen as a clear, intentional effort to do away with commercial fishing all together.”

The letter said the rockfish population in the Chesapeake Bay “far exceeds any numbers that we have witnessed in our lifetime.” It asked the Department of Natural Resources to postpone the decision until newly elected Gov. Larry Hogan is in office, saying he “should be given the opportunity to direct his management team on critical matters such as this.”

The letter was copied to Gov. Martin O’Malley, the leaders of the state Senate and House of Delegates and members of the 36th District General Assembly delegation, among others.

Fithian said after reading the letter at the commissioners meeting that he recently saw a rockfish cut open to reveal a large number of immature crabs in its stomach. He suggested that an abundance of the fish might be partly responsible for recent downturns in the crab population.

The reduction in bag limits was the result of a decision by the Atlantic States Marine Fisheries Commission. According to the organization’s website, asmfc.org/species/atlantic-striped-bass, while the species is not overfished, the population of mature female striped bass has undergone a 10-year decline.