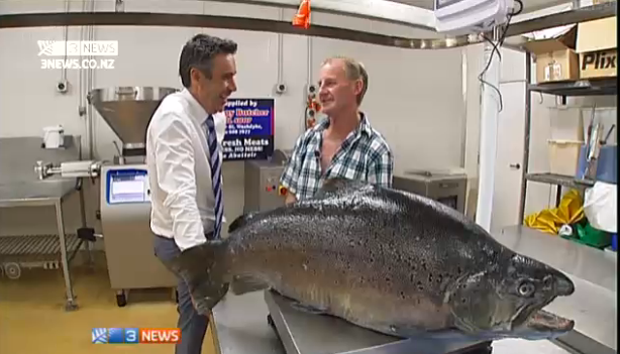 By SkipMarch 27, 2013No Comments
[dropcap]I[/dropcap]n recent years, New Zealand’s trouts weighing double digits have become rather common. Many trouts over 30-pounds have been caught and recorded. Last year, a brown trout close to 40-pounds was caught.

Last week on New Zealand’s South Island, Otwin Kandolf, fly fishing in a hydro canal below a salmon farm, hooked and landed a monster brown trout that scaled in at 42-pounds, 1-ounce!

The official weigh-in event was well-documented by New Zealand’s Channel 3 News, which taped the weigh-in and length measurement of 36.6-inches long and 1-foot girth.

Kandolf said the fish was feeding on salmon food pellets floating downstream from a fish farm, which apparently accounted for its tremendous girth and weight. He added: “It looked to me like a submarine.”

Conflicting reports differ on whether Kandolf’s catch will be certified by the IGFA as the world’s heaviest brown trout hooked and landed.

At the weigh in. New Zealand’s Channel 3 News records the event.